This week my intent was to discuss the financial impact of some of the recently spoiled, influential M13 cards. As many have noticed, at the time of this writing, this set has thus far been significantly underwhelming in this regard.

[Editor's note: the full M13 set has been fully spoiled since Sigmund wrote this article, so expect his thoughts soon! In the meantime, be sure to visit the forums to stay on top of the community's conversations.]

There appear to be a great many spoiled cards geared towards casual and EDH players. Wizards of the Coast is certainly highlighting their dedication to the EDH player within M13 by reprinting favorites Akromas Memorial and Gilded Lotus. Additionally, there are by my count eleven cards which cost seven mana or more (I included Door to Nothingness, which does nothing without a 10 mana investment, and Diabolic Revelation, which is absolutely terrible if cast for six mana).

So where does this leave me? Frankly, it leaves me with either an inconsequential M13 article or a need to audible. Guess which one I chose… 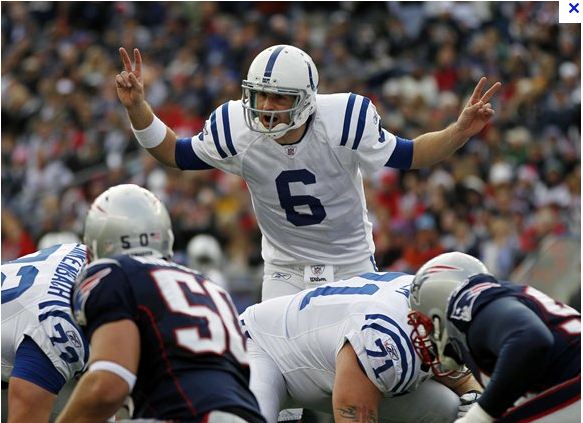 This week it gets personal. Through a series of anecdotes and reflections I want to describe some of my own emotions about this collectible card game as well as where strong emotion has helped and hurt me financially.

For those of you hoping for the next list of cards to acquire, I may mildly disappoint this time. I will try to sprinkle some recommendations throughout the article with my tried and true blacklotusproject.com charts. This may or not be satisfactory, but, in either case, I hope readers at least have an appreciation for my honesty and candidness.

I did not seek out the game of Magic – it found me. Around the time Visions was released my father remarried my Stepmother (although rumor has it the events are unrelated) and I suddenly had a Stepbrother one year older than me. His favorite hobby at the time was this collectible card game called “Magic”.

I asked my father for some cards for my birthday and before I knew it I was spell-slinging left and right. I even won my very first game thanks to a poor keep on my Stepbrother’s part. My first $5+ card was Desertion, simultaneously teaching me that these cards can have cash value and that blue was the strongest color.

Funny enough, thanks to EDH Desertion is once again a $5+ card and a fairly stable pick-up at that. The card is easy to grab in trades and even buy-lists to retailers well (chart courtesy of blacklotusproject.com) 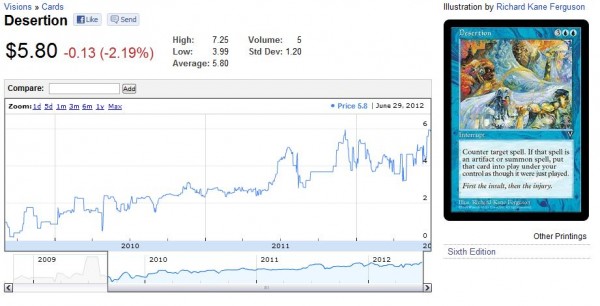 Looking back I realize this was a tumultuous time for me. My father had just remarried and moved far away, meaning I would see him much less frequently. My mother, whom I was living with, moved to a new town and so I had to start a brand new school and make all new friends. I was rather lost.

Magic: The Gathering really helped me stabilize. Through this hobby I not only connected with my Stepbrother, but I also met some of the best friends of my life in other Magic players at school. These memories are all positive and the emotional strength I garnered from Magic is a cornerstone of who I became in my new Middle School. These kinds of feelings towards the game are, in my opinion, 100% acceptable and even encouraged – it drives a type of respected passion for the hobby.

And although we were mostly ignorant about card prices, valuing Craw Wurm at one dollar and Lord of the Pit at infinite, we still loved the game for what it was to us at the time – a way to connect with friends in a familiar way.

My first nine years playing Magic were strictly casual. My friends and I would get together on the weekends and play countless multiplayer games attempting to outplay one another with our Craw Wurms, Dark Banishings and Counterspells. I remember I used to collect Wurms, and my prized possession was Warping Wurm, which I thrillingly opened in a Mirage pack.

My play during this time period was not consistent – sadly, I did not play Magic at all during Urza’s Saga block or Mercadian Masques block. Happily, I also missed Mirrodin block years later. My interest in the game fluctuated much like the value of a highly speculative card.

Because my enjoyment of this game was strictly on a casual level, I made some poor decisions from a financial perspective during this time. For one, my friends and I absolutely hated opening rare mana-fixing lands. They could never win us the game nor gain the respect of our circle, so we tended to trade them away. Sadly, I owned two Dual Lands which met this fate – a Tropical Island and a Plateau.

I also sold many of my constructed playable cards on eBay during my time in college. In 2004 I happily sold my three moderately played Force of Wills for $28 shipped on eBay. And that awful land Wasteland sold for over $10! Score!

Let’s see how those sales turned out for me according to blacklotusproject.com… 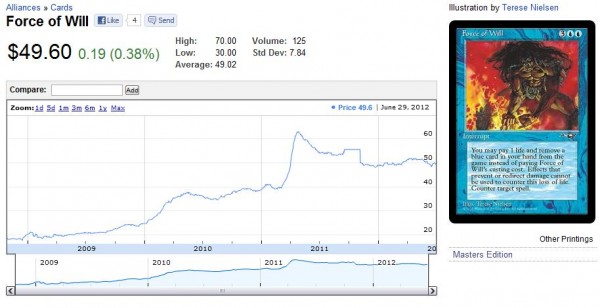 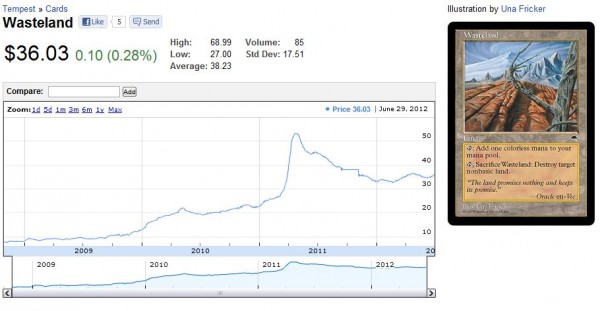 Yeah… sort of reminds you of Apple’s stock price, doesn’t it? 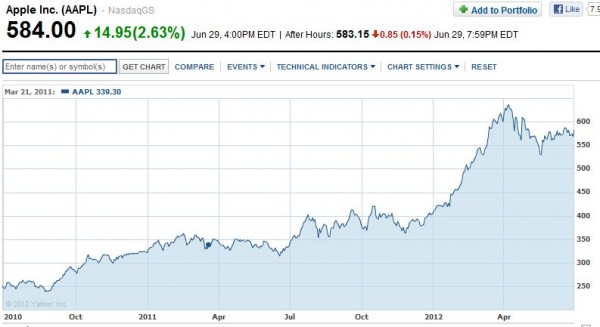 During this phase my mind was often removed from the game of Magic. As a result, I made poor financial decisions within the game. The moral – if you intend to stay in the game in any capacity, at least pay attention to financial trends on a macro level. There is no need to know the weekly fluctuations on card values, but if I had even considered reading some online articles (or InQuest Magazine, which still existed), I would have readily observed price trends. With a little more financial acuity, I could have saved myself from costly mistakes.

My first ever Friday Night Magic was a triple Time Spiral draft back in 2007. I was absolutely crushed week after week – both in the tournament and at the trade tables. I was beginning to notice trends in card pricing and the driving forces behind these trends, but I still allowed my casual side to drive trading decisions. I was thrilled to pick up my first Psionic Blast… right before it rotated out of Standard. I also opened a ton of Legions packs around this time with the hopes of opening Akroma, Angel of Wrath. Never happened.

The problem was I did not embrace MTG finance as a separate entity. I was too emotional about the game and my decisions were influenced by this. I couldn’t bring myself to trade away the cards I loved and, at the same time, I would overpay for cards I really wanted.

This is where emotion needs to be kept in check. In the extreme case, retailers hold almost no emotion for their cards. This is absolutely necessary – if they were emotional they would surely make poor pricing moves constantly.

Most of us aren’t retailers, so we are allowed some emotional attachment. It is okay to splurge once in a while, as long as the majority of our decisions are rational. Was I even playing the Psionic Blast when I acquired it, for example? Nope – I just loved the artwork and classic feel. Should I have just waited another couple months to acquire the card at $3 instead of $20? You bet.

In my last article I talked about how one should not hold emotional attachment to their cards because it’s bad for business. That was poorly stated on my part. The truth is most of us aren’t businesses and we play the game for some level of enjoyment. Subsidizing the hobby through savvy financial moves is great, but the big picture cannot be ignored.

Let me therefore propose a slightly alternate approach. Identify the cards in your collection to which you are emotionally attached. If you’ve always wanted a Gaeas Cradle, it’s perfectly fine to sink the $60 it would take to acquire the card right now. Need the latest Angel card to keep your collection complete? Pre-ordering the card from Star City Games may be costly, but it’s reliable and instantly gratifies. 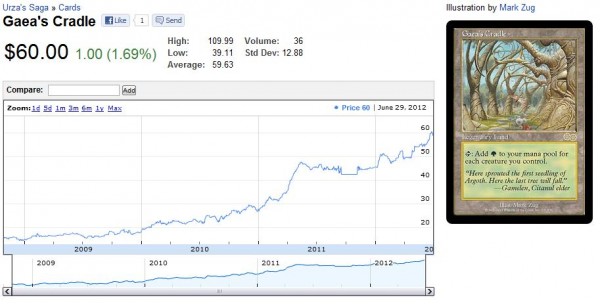 The key is to keep these emotional attachments in check and reasonable. All other cards, and I would go as far as to say this should include every Standard card you own, should remain up for trade. I single out Standard cards specifically because the vast majority of them dip in price at some point, especially near rotation. Even Legacy staples like Noble Hierarch dip at rotation before picking up again.

If you are patient enough, you can acquire most cards at a cheaper price than what you unload them at. That is why I recommend the “nothing is sacred” approach. I would never trade away my Angel collection because of how much time and energy I put into acquiring all these cards. But if someone needed my set of Force of Wills badly enough and I wasn’t using them, I’d be perfectly fine trading them away at retail prices (for example) for a set of Gaeas Cradles.

Many people struggle with how expensive the game has become, especially for the emotionally involved player. As someone who used Magic: The Gathering as a source of stability and friendship during a difficult time, I have just as much emotional involvement in the game as anyone else. But, through some disciplined research and rational thinking, I have been able to apply basic financial principles to my buying, selling and trading to make the game more affordable than ever. This is possible without sacrificing all the joys of having a prized collection worth sharing.