When I first learned about Commander, I was fascinated by the unfair combo decks. Azami, Lady of Scrolls with Mind Over Matter; Seton, Krosan Protector with Masticore and Kamahl, Fist of Krosa.

When you first start playing a casual format, it can be hard to differentiate it from whatever competitive formats you may already play. In those formats, the goal is to win as quickly and efficiently as possible. Players may pursue their own sub-goals like assembling a crazy ten-card combo or hardcasting Griselbrand, but fundamentally the point of those formats is to win the game.

The most important thing to realize about a multiplayer format is that it's not primarily about winning. Sure, everyone's still trying to win, but unlike in other formats, not at all costs. Fundamentally, the goal is to have a good time with your friends, regardless of what's happening on the card table. There are always exceptions; some people love their degenerate games and that's fine too. But in my experience, most people prefer interactive games.

The experience that hammered this home for me happened at a time when my group was all playing degenerate combo decks. One of our regulars brought a Lin Sivvi, Defiant Hero deck to the table and we were ready to ignore him. He wasn't playing blue, black, or green, so what was the worst that could happen?

Well, he cast some mana rocks and rebels, and then played Armageddon. He tutored up more guys, beat down a little, and cast Ravages of War. Then Catastrophe. Every game the plan was to play some guys and destroy everyone's lands.

While it was definitely awesome to witness his fair deck full of dorky white creatures repeatedly smashing our fast combo decks, we realized it wasn't the kind of Magic we wanted to play. Since then, I've always wanted to build a Lin Sivvi deck, but one that was interactive and grindy rather than prison-based. 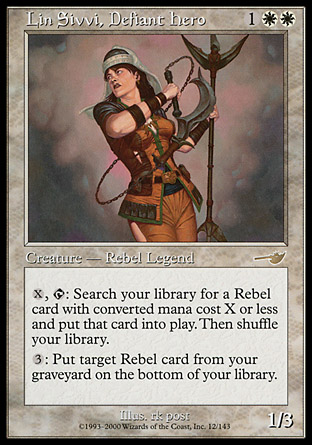 The exciting thing about Lin Sivvi is that she's an engine unto herself. Once you decide which rebels are good enough, you get to cast them as many times as you want each game.

This means you can build a ton of synergies into the deck and that it will be very difficult to break up your combos. One of my favorites, for example, is Zealot il-Vec and Basilisk Collar. Here are the rebels I decided to run with:

There are a number of sweet engines here, most of which involve recycling rebels and sacrificing them for value. It's a lot like any other token deck, except that your creatures have increased utility against the rest of the table.

We have Mortarpod to turn the rest of your rebels into pseudo Zealot il-Vecs, and both Lightbringer and Lawbringer to crush decks in opposing colors.

Whipcorder does a great job of containing creatures that trigger when they attack, like Eldrazi and titans. Changeling Hero protects your guys from removal or sweepers. Aven Riftwatcher is a great recursive beater and lifegain engine. Children of Korlis is similarly easy to recycle and does a great job of keeping your life out of the red zone.

Of course your best lifegain engine is a tutorable infinite life combo. Task Force and Outrider en-Kor are both tutorable with Lin-Sivvi, and when you draw a Condemn or Miren, the Moaning Well you can just gain a billion life. I don't feel bad about running an infinite life combo because it doesn't end the game, it just changes the win conditions. You have to be decked or killed with commander damage or poison, but you're far from unkillable.

It's possible that this deck wants a few more actual rebel searchers, for games where Lin Sivvi gets tucked. Where I play, tuck effects really aren't common so I didn't go out of my way to prepare for them. But it's certainly not unreasonable to run a few extra searchers like Amrou Scout or Ramosian Sergeant.

The unfortunate part of a rebel theme is its narrowness. Since only two blocks had any rebels at all, only so many have been printed. What's worse, most of them are inefficient vanilla creatures that tutor for more rebels, an effect we don't need access to if we always have Lin Sivvi. One or two more searchers will help you swarm the board more efficiently, but they aren't necessary when your plan is to tutor up Mirror Entity and overrun them.

The only things the deck is lacking are a stable mana base and efficient ways to interact with the decks you expect to face. The mana is especially important because every turn you want to both cast spells and activate Lin Sivvi, which can get pricey.

Let's start with the utility effects, the foundation of the deck: 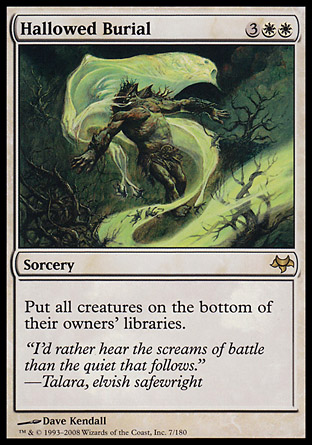 The most interesting thing here is the deviation from the sweepers I usually like. Generally I prefer ones like Austere Command that are flexible and hit multiple types of permanents, or things like Oblivion Stone that can be recurred with Sun Titan.

But when you're tutoring things out of your library, there's a ton of value in putting your rebels back on the bottom of your library. Hence Terminus and Hallowed Burial. You want to be careful to champion Lin Sivvi with Changeling Hero or get her in the command zone somehow before you pull the trigger, but setting up your rebels again immediately is incredible.

The rest of your removal is pretty standard. It's possible that you want more graveyard hate, but you don't want something like Relic of Progenitus since it can exile some of your important rebels and neuter your own late-game plan.

All we have left to do is make sure you can go bigger than the other creature decks and have enough mana to support the rest of your deck.

The biggest weakness of this deck is the finite number of rebels in the deck. Unlike with a commander like [card Kemba, Kha Regent]Kemba[/card] or [card Darien, King of Kjeldor]Darien[/card], you can't make an infinite number of tokens and alpha strike through any number of blockers. You have to actually win through everyone's creatures. Fortunately, there are a few tools available in white that serve this purpose: 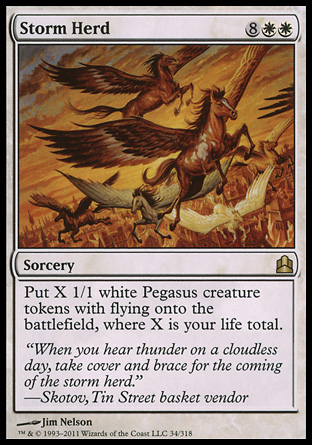 There are two things going on here.

The first is making all of your guys gigantic and getting in for a billion, especially in conjunction with Mirror Entity. The most interesting thing here is Lin Sivvi powering your Eldrazi Monument, which is more cute than sweet. It is kind of fun that you have both Storm Herd and Ajani Goldmane to take advantage of your infinite life combo though!

The other thing is a ton of lifegain. Ranger of Eos finds both of the [card Soul Warden]Soul[/card] [card Souls Attendant]Sisters[/card] and the life will add up very quickly once you start recycling rebels. There aren't a ton of great ways to leverage that life into something proactive, but it is intended as a late-game plan. If people simply can't kill you, you'll win the long game since you can never run out of threats.

Even if you never run out of threats, other players get to keep drawing bombs and answers of their own, so you need ways to keep up. Thankfully, Lin Sivvi has a very powerful effect attached to her: a way to shuffle your deck. Not only that, but a means to thin your library of low-impact cards. This means that you can set yourself up to draw more meaningful business spells than everyone else at the table.

Every deck includes some kind of card advantage and selection engines, but the strength of those effects is limited by your ability to shuffle away the cards you don't like. Scroll Rack isn't nearly as good if you just have to redraw all the bad cards that you put back! Thankfully, Lin Sivvi will always be there, so you can keep rebels out of your hand, shuffle away bad cards, and get a look at a fresh set every turn.

After adding some mana rocks and lands to the deck, here's where I ended up:

On the whole, I don't think this deck is as powerful as some other mono-white strategies, mainly because you have to keep reinvesting mana every turn to keep the engine running. That said, tutoring every turn is one of the most powerful things you can do in Magic, regardless of what the restrictions are. This is only compounded when you consider that you can also recycle the same targets. How exactly does a black deck beat recurring Lightbringer?

I think the deck turned out pretty well and the flexibility should be an exciting change of pace from my usual mono-white decks.

One thing my friends and I have discussed is house-ruling some creatures to be rebels to make things more interesting and give Lin-Sivvi more cool tricks. Nothing too flashy, like Reveillark, but role players like Stonecloaker and Fiend Hunter. What are some creatures you'd be interested in trying out as rebels?

I'm excited to return to my favorite topic next week: lands! I've received quite a few requests to see my most recent build of Child of Alara, and we've seen three sets since I formally updated the deck. If you want to be That Guy at your table, be sure to check it out!

[Editor's note: An earlier version of this article had an incomplete final decklist, which has been updated. Sorry for the error.]

7 thoughts on “Rebels — The Never-ending Stream of Conscripts”