Long Term Capital Management (LTCM) was a hedge fund set up in the 1990s that had a financial model designed to identify market discrepancies. Their idea was that if you had two very similar assets, but the market priced them differently, then over time they should converge in price. The fund would buy the 'cheap' asset, and short the 'expensive' asset. Once prices converged, they would make money. Applying this strategy, the fund was very successful out of the gate, achieving 40% annualized returns after fees in it's early years.

It all went bad for LTCM, though, as they made bets that were sound according to their model, but the market proved wrong. Their model suggested that the market was undervaluing Japanese and European bonds during the Asian Financial Crisis of 1997. So, they bought these bonds and sold US bonds.

Before prices could converge, however, the Russian government defaulted on it's debt in 1998 which triggered a massive flight to safety, driving up the price of US bonds and driving down the price of Japanese and European bonds. When your short positions are rising in price and your long positions are falling in price, things can get pretty ugly. The resulting losses for the fund were huge, forcing a bailout and the fund was closed in 2000.

LTCM's bet would have eventually proven correct as the price of bonds did converge after the fact, but, in the short term, they didn't have the capital to ride out the turbulent market. The smart people (Nobel prize winners in fact) at LTCM had a very sound model, but when an unusual event occurred, their model couldn't cope with what was happening in the market. Once the market decides that you are wrong, it doesn't matter how sophisticated your model or trading strategy, the market will win.

Listening to the market and knowing when to change direction is an essential skill to develop.

Prices for most Modern staples have been drifting down since the end of the PTQ season. This is a predictable seasonal cycle based on what the player base is interested in playing. Using this simple (but accurate) model, it's easy to suggest that buying staples in the off season and selling in season is a sure fire way to profit. But for the exact moments of when to buy and sell, one will have to pay closer attention to the market.

At the end of May, right in the middle of online Avacyn Restored release events, the Zendikar fetch lands had fallen into a price range of 1.8 to 3.25 tix. This was the market speaking loud and clear. These were very attractive prices and almost identical to the bottom they had set at the end of October 2011 when they had just rotated out of Standard. Applying the knowledge that this price level had previously been a price floor made it an easy decision to start buying, as there was no reason to expect fetch lands to fall further based on historical prices. 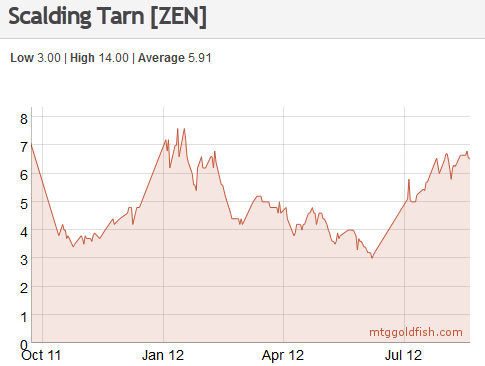 Scalding Tarn is the most played and typically the highest priced of the Zendikar fetch lands. It saw prices of 4 to 7 tix during the most recent Modern PTQ season. Although the next season was 6+ months away, there was no reason to expect these prices to stick around.

The assumption that prices should remain relatively stable in the off season is not a well founded one. In this instance it was important to listen to what the market was saying and not worry about how the dip in price fits into a theory of when to buy and sell. The market was screaming ‘Big Sale on Scalding Tarn!’. Expecting that sale to return at a more convenient or theoretically pleasing time is foolish.

Those sale prices rapidly disappeared as players twigged on and started buying, pushing prices back up. Once prices started to move, they moved quickly, even reaching the price peak from the previous season. In this case, the market had completely reversed directions in a short period of time.

Now the market was saying ‘Desperate for Scalding Tarn! Willing to Over Pay!’.What is the sense of Scalding Tarn having a mid season price, when the start of the next season is half a year away? There is no sense. But at times the market is not sensible and it’s best to just follow along with what it wants to do.

What Is The Market Saying Today?

Rotation is nearing and the prices on the mythics from Scars block are generally bottoming out. If a mythic is used to some degree in Standard, it's price bottom will probably occur after rotation, but for other mythics the price bottom appears to be more unpredictable.

One of my past articles outlines how to profit on mythics that are rotating out of Standard, featuring some examples from last Fall, which observes that buying any old junk mythic will not necessarily yield a profit. In order to improve the odds of success, focus on sets with shorter print runs and sets with both casual appeal and Eternal staples. These are the easiest ways to distinguish where one should park their tix.

New Phyrexia fits the bill in this case, as it is the 3rd set of the block and the presence of Eternal staples such as Elesh-Norn, Grand Cenobite, Batterskull, and Birthing Pod suggest the set will hold good value for redeemers post Standard rotation. Picking up the cheaper Praetors is a good way to make a play on this. They are big, powerful monsters, which gives them casual appeal.

All these factors line up to suggest a steadily rising price for Jin-Gitaxias, Sheoldred, Urabrask and Vorinclex over the coming year. Buying at the price bottom ensures a very low level of risk with good upside. 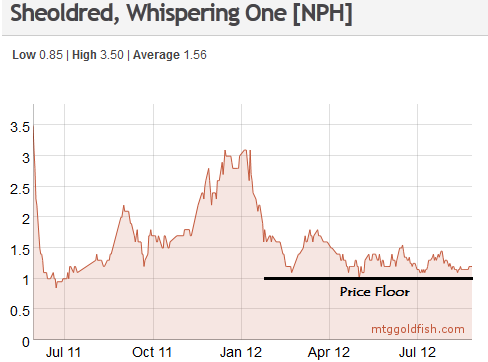 Bonfire of the Damned has been taking a breather in the 38-40 tix range after it shot up to 43-45 tix in recent weeks. There's no indication that sentiment or supply has meaningfully changed for this card. With Standard being in a lull right now, Bonfire is set to run to 50 tix once October hits. Try to pick off copies for 37 or 38 tix on the classifieds by scanning for players selling their lone copies or posting a buy ad.

Taking a position in this card at such an elevated price level is somewhat risky so speculators with only a small amount of capital or low tolerance to risk should look elsewhere. 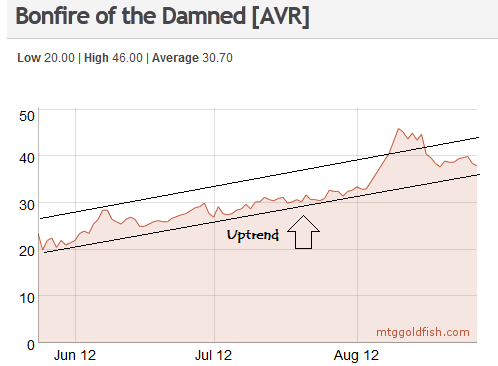 Checking in on the calls from this article, Breeding Pool has steadily found strength, indicating that the opportunity for easy profits on this card have passed for the moment. It's a similar story for Sulfur Falls and Woodland Cemetery as they, like all the Innistrad duals, have risen in price lately.

On the other hand, both Stomping Ground and Godless Shrine have fallen in price and are now in the 9 to 10 tix range. Keep your eyes on these over the next two months. If they creep down into the 7 to 9 tix range, those are good prices and both will yield profits leading up to the Modern PTQ season.

October of last year was a good time to buy into these two lands and that might be the same case this year. 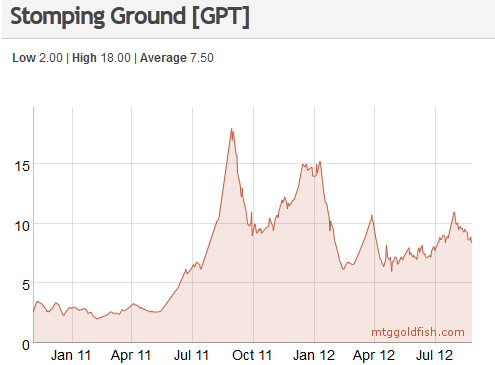 These speculative ideas all hinge on seasonality, i.e. cards move in and out of favor based on what the player base is currently interested in playing.

This model should be the backbone of any serious strategy for speculating on MTGO. But in order to make the most of this simple model, one must listen to the market and be willing to shift course. Don't blindly follow any model until you have a sense of the market and experience in how it moves.

6 thoughts on “Insider: Listening to the Market”