So much for the “dead zone”. Between rampant speculation on Innistrad block cards, anticipation of Return to Ravnica’s financial impact on Standard and Modern, and the recently spoiled Commander’s Arsenal cards, there are certainly enough discussions to keep your head spinning.

I’ve become overwhelmed just trying to keep up with all the forums, tweets, and articles referencing the above products. So rather than trying to digest it all, I’m going to apply historical trends and internalize the facts as we currently know them in order to predict financial changes.

Don’t get me wrong – I intend to keep up with some of the rampant buzz. To tune out the Hive Mind’s voice could be financial suicide. What’s ideal is of course a balance of the two.

It’s no mystery that once Standard rotates, the remaining block often increases in value. As people turn their focus to fresh, new cards the previous block’s cards fall out of favor… temporarily. It doesn’t take long before a new Standard metagame develops and a handful of different cards rapidly become format staples.

Of course it’s not so easy to identify which cards will become critical in the new Standard – especially this far advance when we know so little about the upcoming set. Everyone expects Shock Lands to be reprinted, and we all know that each of the guilds will return (albeit in a different distribution from last time). But, in general, there is a huge gap in information within which to speculate.

Let’s take a look at some of the financially relevant cards currently in Standard.

Miracle cards have demonstrated their power in block constructed, even winning a Pro Tour. At their discounted mana costs, these cards are undeniably powerful. But are they powerful enough to survive a metagame shift?

I believe they will not only survive the shift, but they will actually become more powerful. With a much smaller card pool to select from (no board sweepers, no solid counter-magic, etc.), these miracles will be put to the test. Depending on where the format goes, we may see some solid price increases on some cards. 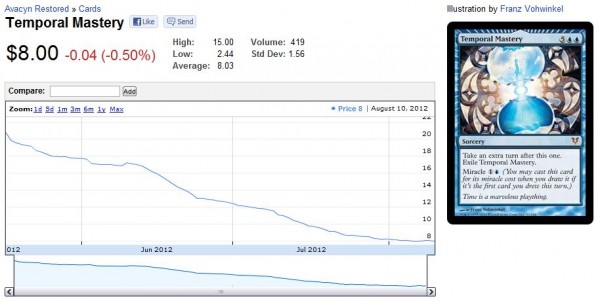 The trend looks pretty depressing, doesn’t it? But in a format rampant with aggressive strategies, control-based decks really haven’t had their chance to shine. And this pseudo-Time Walk is a prime example of a card that should see increased play as the format rotates. Especially since it’s recently hopped onto many speculators’ radar courtesy of Reid Duke’s SCG Open victory: http://sales.starcitygames.com//deckdatabase/displaydeck.php?DeckID=48345.

Another miracle card which may see a price shift come rotation is Terminus. It’s no secret that I’m speculating on this card. For those who don’t follow me on Twitter: 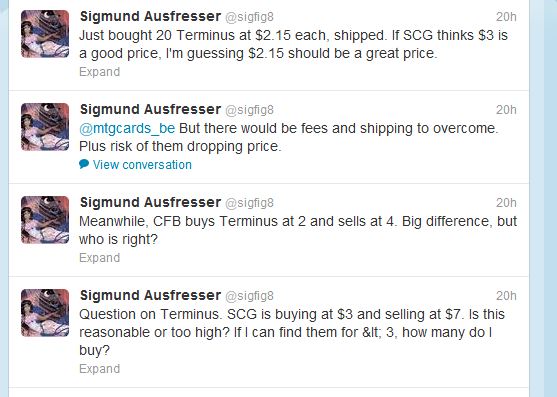 It’s also interesting to see Star City Games’ aggressive approach to Terminus. While it is possible (though highly unlikely) SCG is unaware of the card’s dropping price, I’ve wagered that they too are speculating on this card. After all, with Day of Judgment leaving the format what other board sweepers are useful? Terminus may also strengthen if some of the Return to Ravnica Guilds depend on graveyard synergies (I’m looking at you, Golgari) or token strategies.

Edit: Since Sunday, August 12th, Star City Games has dropped their buy and sell price on Terminus to $2 and $6, respectively. That being said, there were four copies in the SCG Kansas City winning Legacy decklist. This card may not have a home in Standard, but it is certainly powerful enough to find one.

I’ve saved the miracle with the most buzz for last: Bonfire of the Damned (chart courtesy of blacklotusproject.com): 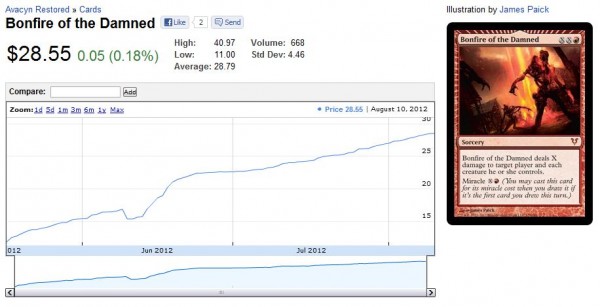 This card has been on a steady rise since mid June. But can this Standard all-star continue its run in a new metagame? I’ve mentioned in the forums how red sorceries are rarely the most valuable card in Standard. And with so many unknowns on the horizon, it feels like there is more downside potential than upside potential. The card sells on eBay for $35 already, and I have a tough time seeing auctions that pass $40, unless the card really warps the format.

Because I’m risk averse, I already sold my few copies for a marginal profit with intent of buying back in should the price drop. If you have an appetite for risk, feel free to hold onto your copies. But as a cautious speculator who has been burned from Standard rotation in the past, I’m going to buy into underappreciated cards like Temporal Mastery and Terminus instead.

As most of you know, there have been two cards confirmed for Return to Ravnica: 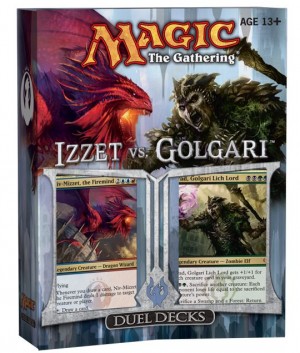 The lack of confirmed information is stopping no one from speculating on what is to come. We can safely infer a few key facts solely based on the spoiled cards, and so I’d rather base my decisions on these facts rather than pure speculation.

First, we see that Wizards is not afraid of reprinting previous Ravnica block cards in Return to Ravnica. My guess is that the reprints won’t stop with Niv-Mizzet, the Firemind. This means no card in Ravnica block is sacred.

Of course, the most financially devastating reprint would be Dark Confidant. But beside the Shock Lands, there are a handful of reprints that could impact card values negatively such as Doubling Season, Life from the Loam and even Spell Snare. Net, I wouldn’t recommend acquiring any of these cards while they are so vulnerable to reprinting.

I have already made reference to the second fact we can garner from the two spoiled Return to Ravnica cards confirmed so far: the graveyard may still matter.

There is already a potential synergy between Innistrad and Golgari. Gravecrawler and Geralfs Messenger are already seeing Standard play, and if Golgari gives you reason to kill your own creatures, these guys could see a resurgence.

And don’t forget my number two speculation for rotation: Innistrad Duals. There just so happens to be a [card Sulfur Falls]U/R[/card] one and a [card Woodland Cemetery]G/B[/card] one.

The third and final deduction I’ve made from the confirmed Duel Deck Izzet vs. Golgari is that Return to Ravnica will probably be awesome.

Is this relevant? Well, if this block is as powerful in eternal formats as the original Ravnica block, then perhaps it’d be a wise investment to hold onto a sealed booster box of these next three sets. They are pre-selling at $90-$100 now, and I don’t expect their prices to drop much. Just look at prices of the original Ravnica block booster boxes: 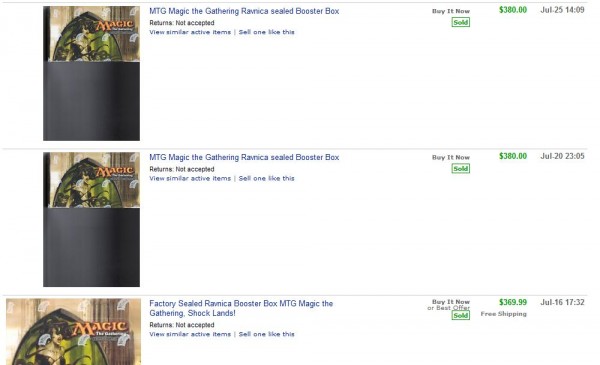 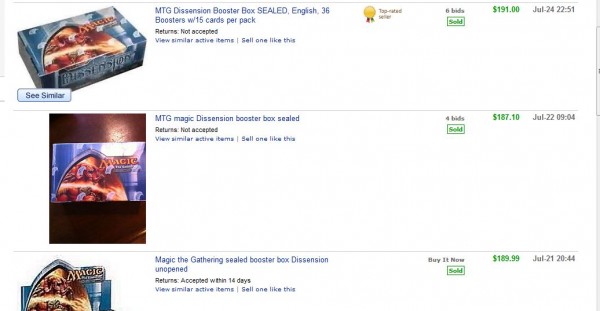 Investing in these would have yielded a fine return (to Ravnica -- sorry I had to).

The next Commander product has just been announced, and it sure has gotten players’ attention. Wizards of the Coast is marketing the product with a super premium price tier by marking an MSRP of $74.99! What do you get for that investment?

Well, besides some neat counters and a sweet life keeping device, we know we’ll also be getting 18 foil cards including Sylvan Library. That’s pretty sweet, but it’s not worth $75. So is this deck a buy? A Twitter poll reveals people’s hesitancy due to the steep price:

Clearly we will need more information before the overwhelming majority is convinced this product is worthwhile. The first round of Commander Decks have been out for a while now, and even the most popular one, Counterpunch, can be had for under $60 on eBay. Political Puppets, on the other hand, still can be had for under $40, very close to MSRP. Many Wizards of the Coast sealed products increase in value a few years after release, but it’s not a guaranteed trend. It truly depends on the value of the cards within, and that is why I am in the “wait” group from the poll above.

Some key finance players are avidly supporting a preorder of this product, but I see little downside in waiting. Especially since I don’t think this product is even available for preorder yet anyways.

Have Your Trigger Finger Ready

I’ve theorized what changes may be coming, but soon enough we will have new information daily. Spoiler season always brings with it some wild speculation opportunities, driving rapid price swings on specific cards. The best advice I can give you is to have some cash ready for buying and flex your index finger. Pay close attention to Twitter and the QS forum as players point out the next hot speculation target.

Once a target is spotted, the window to pull the trigger on buying the card closes rapidly. Most people buy out TCG Player and eBay first. Less searched sites such as Cardshark and even Amazon are not bought out as quickly. While everyone buys out eBay, I’d suggest going to these sites first for opportunities to purchase the hottest card on the cheap.

Just don’t tell anybody else there is stock at these sites until after you’ve bought the copies you want!