Edit: Since I initially composed this article, Valakut, the Molten Pinnacle has been unbanned in Modern. The easy calls were in the Insider email, and I bought 19 Scapeshifts at $2 each, so I expect that to work out. I don't see a long-term spike over $7-10, though, so be aware of that. I also like Blood Moon as a possible hate card to tick up in popularity as it fights both Valakut and Tron. Now for your regularly scheduled article.

I want to divide this week’s article into two parts. The first is some financial thoughts on the spoiled cards so far in advance of my usual set review/prerelease primer next week, and the second half is, at least to me, more interesting.

I want to look back at Scars block and start talking about what cards are now good pickups as the set rotates. Basically everything in Ravnica is selling too high, as is usually the case, and the upside on the Innistrad duals has already been realized, so I’m off to look for the next opportunity. Which comes from going backwards.

First off, I really like Collective Blessing, because it is only going for a dollar. The new Keyrunes also play well with this theoretical deck, and it’s a reason why I still really like Sigarda, Host of Herons. I understand Zombies is the biggest thing coming (I really do), but these G/W/X decks can easily go 1-3-5 on the mana curve and hit Sigarda on Turn 3.

That’s obviously not game over or anything close to it, but it’s very powerful. Add in some Gavony Townships, Collective Blessings, Lingering Souls, Charms and so on, and there’s a deck coming together there.

I also think Zombies is going to be insane. There are so many tools for aggressive decks, from RB to GB to Jund-colored strategies. We wrote off Huntmaster, but it’s possible we’ll see a comeback since he’s so good against these strategies.

Angel of Serenity is also way up since its spoiling (and subsequent Insider blast). I don’t think it will hold its pricetag at $15. Though the card is playable, it’s expensive and I’m just not sure the slower decks that could take advantage will have a place in the metagame, at least early.

Another recently spoiled card, Rest in Peace, is worth noting. It’s yet another card to hate on Graveyards, though this one does cost a card to do so. It’s also worth noting that it combines with [card\]Energy Field[/card] in Legacy, though so does Leyline of the Void. Maybe this card being in White rather than Black will make a difference and it’ll be worth picking up foils early, so keep that on your radar.

Past that, I need to get in some more testing with individual cards before my review next week, so that’s where I’m at on Ravnica.

What I do have, though, are some Scars picks that I think give us a lot of opportunity right now. Let’s begin.

There’s probably no better opportunity in Magic right now than getting in on Scars lands for super cheap. Cards like Blackcleave Cliffs and Seachrome Coast are heavily played in Modern. We’ve seen what that’s done to Zendikar fetchlands, and, while the effect won’t be as pronounced, it will be there. The pair of those is around $5 most places you look, and I expect that to fall to $3-4 in the next month or so while people rush to Ravnica cards. 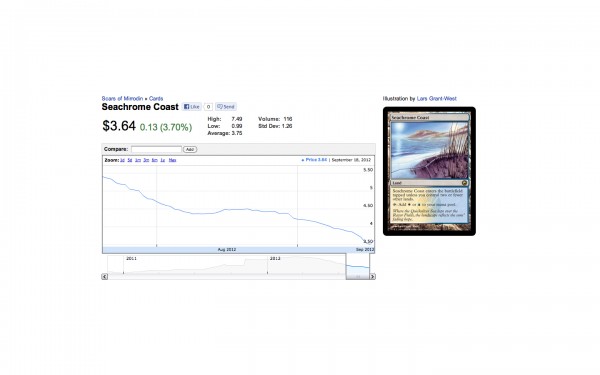 That’s where the opportunity will be. People are already trading these around $3-4, and I think it’s hard to lose at that price. Two to three months from now people are going to realize they still need these for Modern and they will come back. I’m not sure how much the prices could spike this year, but it will stabilize them and then they will begin to go back up.

This has always been casual gold, and pretty soon it will really start to dry up from binders. This is going to be a $5 card in just a few years, and you need to start getting these (if you haven’t) before you lose the opportunity.

Interestingly, this is cheaper at SCG ($10) than TCGPlayer ($11.50). This is a Mythic, an EDH card, an Eternal card, a casual card… it hits all the checkmarks. Wait for this to drop in the coming months and then move hard.

This already went through a spike last year, but it’s pretty much the all-star of the Modern Affinity deck. It’s between $2-3, but I watched these trade at $5-6 during Modern season. Affinity is a cheap deck for people to get into, so don’t be surprised to see these spike back up in popularity every year.

While we’re on this note, grab Memnites as well. It’s probably worth a little more than you’d think.

Another really good pickup. This thing was around $20 forever, but it’s fallen all the way to $12 on SCG. Not only are Moxes always worth money, this card sees legitimate play. Like this for trade around $10.

You already know this card is not bulk (and is good for a dollar bill from a dealer), but it’s about to become even harder to find.

This is probably the best card on this list to pick up. I like it at $5 (or less), since it’s a Legacy staple, even if it’s banned in Modern. As such, foil copies are probably your best bet.

As long as this doesn’t get banned in EDH, its price is going to keep going up after the initial post-rotation drop.

This hasn’t seen a home in a while, but it’s still a Sword, and like the others in the cycle, will hold long-term appeal.

This is also probably the most likely from the block to see Legacy play, so that will buoy its price higher than the others.

This is another very solid pickup, since it’s a huge Modern staple. I expect this to double (it’s $3 now) over the next couple of years. Now that more people will have access to Shocklands, the barrier to entry into Modern will be even lower.

This is sometimes played over Extirpate in decks that want the effect, and is always a card type popular with casual players.

This is going to hit Nicol Bolas levels soon. If that doesn’t make sense to you, keep in mind the Planeswalker version of Bolas was $20+ for a long time until they destroyed him with reprints. Karn seems a little less likely to be reprinted, since he’s not the Big Bad of the Magic multiverse. Really like picking these up in the next few months and hoarding.

Return to Ravnica looks awesome. But remember, there’s a lot of money to be made in the market where people aren’t looking, and that’s rotating Scars cards.

7 thoughts on “Insider: Looking Forward, Looking Back (and Valakut!)”