As of today, nearly the entire set of Return to Ravnica has been spoiled. No more guesswork, we now have all the tools we need to prepare for this season. As I discussed last week, I don’t suggest buying into sealed product of Return to Ravnica in large quantities unless you have a reliable and rapid outlet for your cards upon release. Separately, it’s now old news that Innistrad lands are a good pickup, so where can we go from here?

With the rotation of a big chunk of the U/W Delver pieces, many feel this deck simply won’t survive rotation, and I agree. Without the ability to Mana Leak a Day of Judgement on Turn 4, there’s nothing protecting the 3/2 insect from being swatted from the air. Even if Delver decks evolve to play Izzet Charm or some other countermagic, Supreme Verdict is simply too much for an aggro-control deck to fight through. This has a lot of impacts on what decks can exist now that aggro-control isn’t around.

The Return of Control

Control decks haven’t seen a ton of action in the last year. A few have had their moments in the limelight like U/B Drownyard, Solar Flare, and U/W Pristine Control. Traditional control decks like these were good in their own particular moment when Delver wasn’t as popular. Delvers ability to present a threat and protect it from removal for turns in a row squashed these decks from competition. We will now see some truly powerful control decks appear, most likely including Supreme Verdict and/or Terminus as sweepers.

The presence of Zombies means Terminus will be the trump sweeper for that matchup while Supreme Verdict will clean up all the other creature decks and buy a small amount of time against Zombies. The sweeper I expect to see less and less play? Bonfire of the Damned. The Mythic has been poised around $40 for quite some time now, and I expect it to finally come back to earth. $20-25 is a much more comfortable price for a card that is only played in one or two decks. The only decks that will realistically play this card are creature based aggressive or midrange decks that need to punch through an army of blockers. These decks are going to have a much harder time fighting through dedicated control decks, and Bonfire simply doesn’t do enough there.

If you are the control pilot, a reliable sweeper is more important than the one-sided nature or the damage to the face. I’d expect to see Blasphemous Act in a control build before Bonfire of the Damned. While I don’t expect its value to fall completely flat, I could see it being cut in half, which is enough for me to want to dump and rebuy around $20 in a month or two. If the mana is as easy as it appears it will be we may see a four or five color control deck featuring all the most powerful cards in the format. My bet is that Chromatic Lantern will appear in these decks, providing both ramp and fixing to impose their will on creature decks. I envision an EoT Cyclonic Rift as a sweet way to set up an endgame.

It’s extremely uncommon for control decks to thrive just after rotation. Usually the reason for this is there is no shortage of aggressive creatures but there’s a limited amount of good answer cards. It appears this trend has changed, and that Control may find a presence. While a B/G Zombie deck is likely to exist, I always like to reconsider Red Deck Wins when it comes to this time of year, because as people are experimenting with new brews, Red Deck Wins punishes those who stumble.

That being said, I like picking up on Stromkirk Noble while he’s under $2 most places. This deck would likely also feature the new Red two-drop Ash Zealot. As an aggresive threat whose ability will also do extra damage from time to time it could slot right into this archetype. I also expect Flames of the Firebrand to be an inclusion in this deck. With the rotation of Arc Trail, this card is the most obvious replacement, and does a good job of what it’s asked. Flames of the Firebrand can be found easily under $1/set and I’m expecting that price to at least double if not triple. As an uncommon it could easily garner $1 per card, and I’m digging deep into these.

They sure did print a ton of Graveyard hate! The card I’m most interested in is Rest in Peace. For 2 mana you nuke all graveyards and put a Leyline of the Void on all players. I expect this card to see play in all formats, especially Commander. As far as graveyard hate goes, this card is fairly complete and puts together two different hate abilities that are often both played on separate cards. While it’s already pre-selling at $4, I expect this to come down a bit, and gradually come back up over the distant future. As we see the price dip, let’s be prepared to buy in on this one. The quantity of graveyard hate has me less excited about the Jarad's Orders card we saw spoiled last week, as tutoring cards to your bin is only a solid Game 1 strategy given so much solid hate is available. 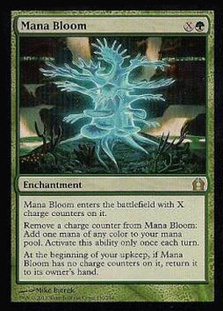 I’m a sucker for enchantments that have powerful effects that can only be unlocked by crafty deck construction, and two have been spoiled that are worth considering. Mana Bloom is an interesting card that allows you to store up your mana from one turn to trickle into your future turns. It also bounces back to your hand if there are no counters on it allowing you to reload it.

It’s a very slow and clunky effect, but I don't know if an Enchantress deck in Legacy could make use of this. At worst it comes down for 1 and bounces the next turn allowing you to keep playing it every turn. If you’ve got some Enchantresses in play, its a engine on its own. While it pre-orders at only $1.25, I haven’t seen any creative ideas that warrant this being more than a bulk rare.

The other one is Search the City. While the end result of an extra turn is enticing, there’s quite a bit of work involved to get there. It can be similar to a Tome in the sense you could get a card per turn into your hand but its pretty conditional; however, if there’s a way to abuse this, extra turns get out of hand quickly. I’ve been fiddling around with creative ways to make this card work.

What other archetypes are supported? Is there any Innistrad Block cards that may see some sharp changes as a result? This is the type of thought process that puts you ahead of the pack when rotation comes.