The market is on the move once again. Most of you probably saw Star City Games’ most recent stunt – they increased their buy price on Scalding Tarn and Misty Rainforest to $20. Their sell price similarly increased to $35 for NM copies. Incredible.

This simple change suggests so many underlying implications. We’ve already ruled out the biggest potential implication as false thanks to a timely tweet from Ben Bleiweiss:

The sigh of relief could be heard around the country.

But there are still other reasons Star City Games would want to artificially inflate the price of Zendikar Fetch Lands. For one, Modern season is around the corner and they will want to be well stocked. Additionally, Real Estate has always been one of the safest investments in Magic Cards. While supplies are considerably less, a quick check on blue Onslaught Fetch Lands prices suggests how high the Zendikar counterparts could go.

This recent movement in the market is a perfect time to revisit the importance of Land cards in MTG Finance. The more ubiquitous the lands, the safer the investment.

I cannot even name all the Nonbasic lands in Magic. While all ten Dual Lands and Fetch Lands can be readily recalled by the savvy MTG speculator, most people can’t name the five Legendary Champions of Kamigawa lands so easily. When was the last time you’ve seen Eiganjo Castle legitimately played? (Although I see no reason not to play this cycle of lands in EDH.)

The inevitable truth is that color-fixing rare lands are disproportionately more financially relevant than those lands that produce one or zero colors of mana. And while cards like Karakas have earned recognizable spots atop the Nonbasic land food chain, the reality is that color fixing is so often needed that rare versions of “Dual Lands” are so often good investments.

The most recent case is of course the recent jump in Innistrad Dual Lands (chart from blacklotusproject.com). 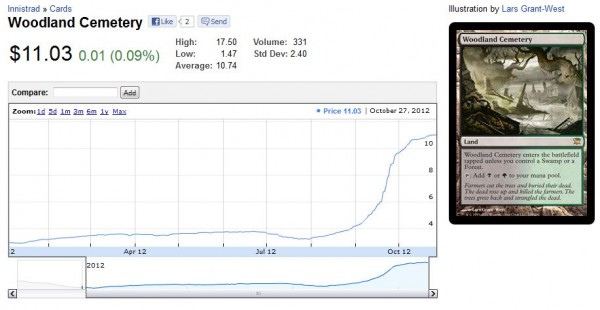 I sure hope you were acquiring all five versions of these mana-fixers as I wrote avidly about them a few months ago. Most of these have neared their peak, with Woodland Cemetery winning the reward for most overpriced.

By the way, the only Innistrad Duals I haven’t sold yet are half my Hinterland Harbors and all of my Clifftop Retreats. I am hoping for a metagame shift with the release of Gatecrash, and this should give these two a chance to inch higher.

Pseudo-Dual Lands don’t have to be in Standard and Legacy to be financially relevant. Thanks to the advent of Modern there are so many lands that have value beyond EDH appeal. If it’s a rare land that produces two colors of mana reliably, and if it’s Modern legal, then it has value.

Filter Lands have rebounded significantly since their post-Standard rotation drop. Their pattern will likely be followed by Scars of Mirrodin Dual Lands, which are just starting to rebound from their bottom (chart from blacklotusproject.com). If Filter Lands are any indication, these “Fast Lands” are destined for a rebound, and they don’t face possible reprint in Modern Masters. Acquire accordingly. 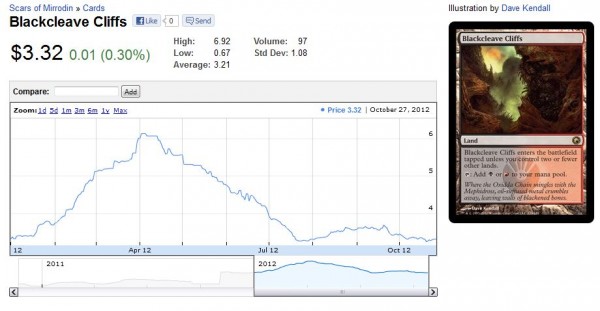 Even going old school with Pain Lands can merit some value. Despite being reprinted many times in Core Sets, Pain Lands haven’t seen print since Tenth Edition. Not all of them are financially relevant, but the enemy colored versions haven’t been printed quite as much and may have some potential. Especially Shivan Reef, which sees Modern play and is a fun casual color combination (chart from blacklotusproject.com). 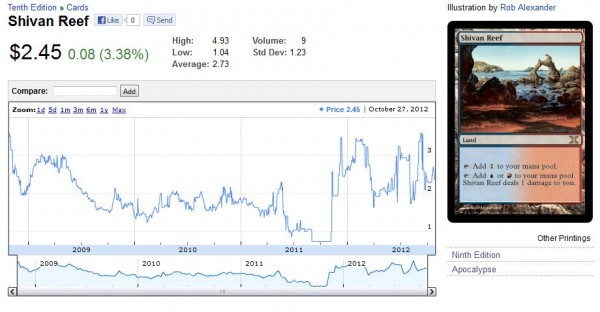 Because of the consistent playability of Pseudo-Dual Lands, I will always view these as solid investments. Reprints are always possible and even likely, and this does have an impact. Many Shock Lands will never be the same again because of their massive reprinting in Return to Ravnica. But as far as stable long term investments go, you could do much worse.

And for those who care, I did check – even the Unhinged card City of Ass is financially relevant. Foil copies are SOLD OUT at Star City games at $14.99. In this case, I think this is a legitimate “sold out” too. After all, now that mana burn is gone, City of Ass is strictly better than City of Brass.

Basic Lands Have Feelings Too

For stable long term investments, you could do even one better. There are five cards that are legal in every format and are always relevant in every metagame. I am, of course, talking about Basic Lands – the only cards that never rotate.

Yes these have been printed a zillion times. Yes Basic Lands are boring. But this does not preclude the fact that Basic Lands can be financially relevant. You just need to know where to look.

For starters, any full art basic land is noteworthy. Zendikar copies are the most common and they still buylist at $0.10, the same buylist price as regular foil lands. Foil Zendikar Lands are even more desirable, already buylisting up to $6. It may take a long time for these to reach $30 like foil Unhinged Basics, but I can Foresee no reason for foil Zendikar Basics to drop in the next few years. These are pretty safe to invest in.

I suppose it would be possible and even likely that Wizards once again prints a new set of full-frame basics. Players love them and their presence in a set helps to sell packs. If for some reason Wizards was lazy and reused the Zendikar art, or if they printed even sweeter artwork, then I could see Zendikar Basic Lands diminishing in popularity. The good news is there is something even safer.

No matter how many reprints Wizards may do, I will go out on a limb and suggest there are a few Basic Lands that will never be printed in a comparable form again. One of my favorites is the number one most frequently reprinted card ever – Mountain. The reason Mountain wins this prize is because it appeared alone in the Arabian Nights expansion.

As time passed, this unintended blip has created a rare, highly sought after Basic Land. How’s this for a stable price chart (from blacklotusproject.com): 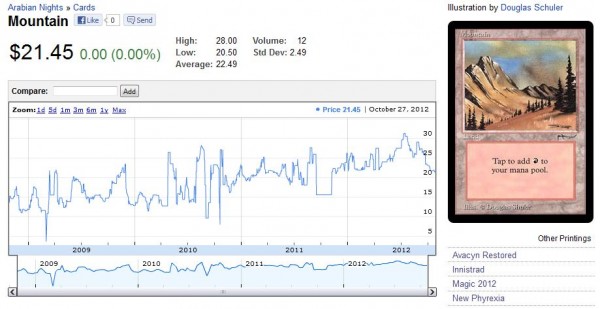 Some wild fluctuations did take place but they were short lived and the general trend has been upwards. In fact, since early 2009 it looks like the card has nearly doubled in price. I wish all of my assets would double after 3 years. And since Wizards will never reprint or ban Arabian Nights Mountains, this is hands down one of the safest investments in the game. Just don’t expect a lot of daily discussion on it.

But if you thought Arabian Nights Mountain was the most valuable Mountain, you’d be dearly mistaken. Know which Basic Lands are even more valuable? How about these: 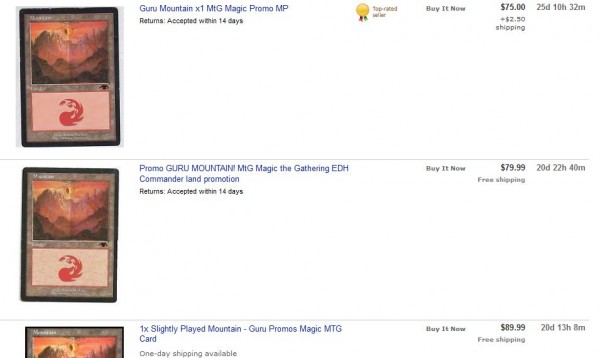 Those eBay listings are for one Mountain. Now over ten years old, Guru Promos are exceptionally rare and valuable. Guru Islands are the most expensive, hovering in the $120 range!!

But I wouldn’t do justice to the most valuable basics I’m aware of if I concluded my article here. Off the top of my head, there are one more set of five Basic Lands that are more expensive. They are so rare, in fact, that I couldn’t even find any listed for sale.

They are, of course, the Summer Magic Basics.

This image is from ABUGames’ website – it’s no surprise they have little Summer Magic in stock. But at least they had a price to reference. Star City Games didn’t even bother having a subpage available for Summer cards since they have 0 in stock! I would wager my life’s savings that Summer Magic Basic Lands will never get reprinted in any way.

So if you can find them, these must truly be one of the safest investments in the game of Magic – just be careful acquiring since finding an outlet to sell may be tough (think rare pieces of artwork).

Back to the Future

All of these Basic Lands are fascinating to the right buyer. I didn’t even mention some of the really obscure Basics, such as APAC lands, the Wald misprint, or my personal favorite, the Drudge Skeletons misprint. 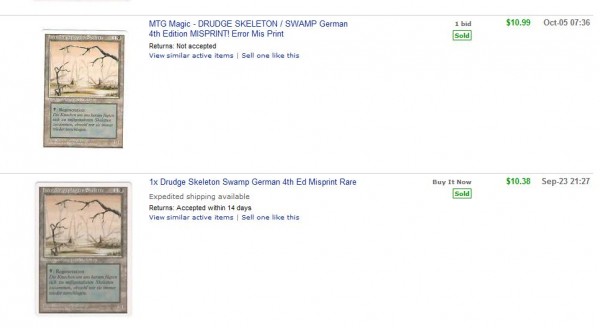 Approaching Basic Lands and Pseudo-Dual Lands as key conservative investments for a diversified MTG portfolio is a solid strategy. They are always legal, they are unlikely to become obsolete, and they are always in demand. The less likely to be reprinted, the better. And in the extreme cases, Star City Games may take notice of their popularity and suddenly increase their price drastically, creating easy profit for you. This is why I loved Innistrad Dual Lands so much and it’s also why I’m acquiring Scars of Mirrodin Lands now even as we speak.

20 thoughts on “Insider: The Value of Lands”