I hope everyone’s Return to Ravnica prerelease was as awesome as mine! I played both Golgari and then Azorious and liked both, though I found I definitely preferred Azorious, at least for the 2HG format. Playing Draw-Go while your partner played Creatures was fun.

All right, with that out of the way, I have a quick question for you:

What Magic product has increased the most in price over the last four years?

I expect a lot of things are running through your mind right now. Here’s one you may have guessed. 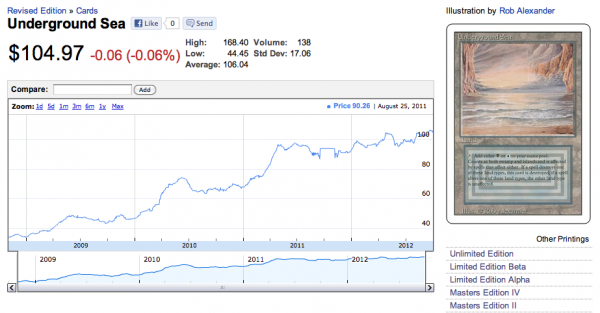 Underground Sea is a good guess. All the Duals have gone crazy in that time frame, and Sea has risen about $70 since then. If you asked me this same question, I would have likely answered the same were I pressed, or a few other cards I could name.

But that’s not right.

Would you have guessed From the Vault: Dragons?

The special item, which opened at $35 MSRP and could be had for even less than that, is up to $150 on SCG and goes for somewhere around that on Ebay. Someone even spent $157 on one, which is a little crazy since it can be had for cheaper than that on SCG, but to each his own.

What? There’s not even any Constructed playable Dragons in the box! I know, but Collectors want it. That, combined with the short print run of the product and the growth in the player base since then has led to a $115 retail increase. That’s a rate of about $30 a year.

To be blunt, that’s insane. Investors would kill for stocks that consistently showed that kind of growth. We have that right here with Magic, but it’s something even those of us “in the business” overlook way too often.

I know why. It’s not sexy to sit on cards or product for years at a time as it accumulates dust in the closet. And, unless you’re a collector who just likes to look at it, it means very little to you.

I came into a lot of sealed product about 6 months ago in a collection, including all the good From the Vaults and all five Commander decks. I recently found a buyer for all of it at once, so I shipped to him at a bit of a discount because stocking away the money, not to mention selling it all at once instead of piecemeal, was an attractive option for me. But that doesn’t mean I’m not always on the lookout for sealed product to hold onto, even though I have no interest in collecting it.

Because it’s not just Dragons that is worth money. Hell, it’s not even the sets that come with more value in them than the sticker price. Stuff like Duel Decks: Elves vs. Goblins commands a nice price, and even things largely seen as “misses” like FTV: Legends or Premium Deck Series Graveborn routinely sell now for more than the MSRP.

I think we can attribute this to the “collectible” aspect of this Collectible Card Game we all love. As players and traders collecting isn’t something we all inherently understand, but it clearly affects the market. It is a totally advisable move to grab every sealed product you can at MSRP when it comes out, even if it’s a critical disappointment. In the long run, this will essentially give you cash to hide away in your closet, only to find it’s accrued interest when you get back to it.

With that out there, let’s look at the most recent round of Sealed product we can get: Guild Boxes.

And, unfortunately, I’m just not sure I can advice buying into these, at least not en masse. The price on these has come steadily down in the last week as more and more hit Ebay. I have an Izzet guild box I got as prize support that I have up on Ebay, and I expect to get no more than $30 for it.

And I expect that to come down even further, for a few reasons. Firstly, these things are kinda flimsy. Now, that’s not a complaint per se, because they were great for what they were built to do and the concept was awesome, but it means the boxes aren’t going to hold up great over time compared to the way the product like the From The Vaults series will.

This is the same reason that individual Faction packs from Mirrodin Besieged aren’t selling great on Ebay; people want a wrapped box or a clearly-sealed product. With our Guild Boxes, the “seal” is literally just a small sticker. This doesn’t help matters.

Secondly, if/when the box is opened, the cards inside are just regular packs. Even the Guild pack has regular cards in it. Once it’s been “cracked” (small piece of tape broken) the entire package is worth nothing more than any other six packs of Return to Ravnica.

Products like the upcoming Commander’s Arsenal, for instance. A premium set that comes in nice packaging and contains alternative art/foiling for historically popular cards? That’s the kind of place we want to be.

The first impulse upon getting these products at MSRP (if your store sells at that price), can be to flip them for instant profit. And that’s fine. But it’s products like CA that are going to keep going up in price, just like Dragons.

And that’s where I’m going to put my money when it comes to sealed product.

22 thoughts on “Insider: The Value of Sealed Product”