The holiday season is here and only a couple of weeks remain before the end of this PTQ/GP season and the lull before the next one begins. This upcoming weekend is the SCG Invitational in LA, where I will be judging, and I’m hoping to get my eyes on some new Legacy tech. Beyond that, there isn’t a ton of big action between now and January, as many people will be occupied with holidays visiting families. MTGO does a good job of capturing additional demand while people may be away from home and still want to sneak in some Magic.

Matt Lewis did a great write-up last week about the holiday queues that MTGO is offering, this includes the return of the MTGO Cube including the Power 9, and both Urza’s Block and Mercadian Masques Block drafts. The other big part of this announcment is the fact that Power 9 will appear on MTGO at all. Eternal players have been clamouring for Power so they can replace the online-only format of Classic and play true Vintage. While the cards drafted in MTGO Cube are considered “Phantom” (which means after the draft ends your account will not keep the cards), there was an additional announcement from WotC that they are planning to release the Power 9 in the reasonably near future for players to use for Eternal. While we don’t know exactly the how they will be released, it appears the horizon is less than a year away.

What does the release of Power 9 on MTGO mean?

With Vintage as a format, there’s a whole new swath of cards that suddenly have increased value, assuming Vintage queues and Daily Events will subsequently exist. Most of the key Vintage cards already exist. Some have value because they are also Legacy staples, while others are only used for EDH and other casual variants, as well as the unpopular MTGO Classic format. Vintage on MTGO is an opportunity for many Magic enthusiasts to get their hands on a format that they are otherwise unable to afford the decks in paper. I expect it to be fairly popular, especially at the onset.

So if you expect Vintage on MTGO to become a thing, how soon do you make a move?

The WotC announcment didn’t give an exact date, and not even a promise, but they guardedly stated that they’d like to have it out before the end of 2013. Most speculators are going to wait until they see how and when the Power 9 will be released to make other speculations, but there is certainly a viable option to stay ahead of the game by moving in early. Keep in mind, if these cards aren’t released for a year, it may take some time to see an increase on some of these specualtions, but there are some targets that may be worth the wait.

This is an interesting card. Having only been printed in the first Masters Edition, it sits easily above $100, with a historic high over $140. Vintage will certainly increase the popularity of this card, but will Force of Will be the barrier to entry in the new online Vintage metagame like it is in MTGO Legacy? MTGO has said they do not plan to release Force of Will in another Masters Edition, which means that price is likely to stay high. What they didn’t say is that it could still be a promo or otherwise released. Maybe it will be included in the release with the Power 9? Maybe the Power 9 will be released similar to Modern Masters and they are waiting to see how that release goes. In either case, I think Force of Will is the exception to the rule, and is not likely a good spec target, at least not for purposes of the Vintage speculation. Many would argue that it’s a good target anyway because it’s fallen a bit since its peak at 140 tix, but it’s simply too expensive for me to risk so many tickets that could plummet with the release of a promo. 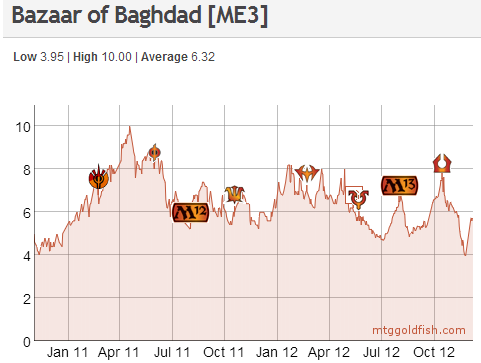 This land is one of the most powerful cards in Magic. It singlehandedly drives the Vintage dredge deck(s) and has some insanely busted applications. Bazaar was printed in Masters Edition 3, and can be found under 6 tickets. Because the dredge deck doesn’t play many Dual Lands nor Force of Will it will likely be one of the least expensive decks in the format. In paper Vintage, Bazaars are extremely expensive, and since they aren’t on MTGO, I think people will gravitate towards the deck. At 6 tix, and a fairly stable history, I like this card to show some serious gains if Vintage becomes a thing. While the downside here is only the time it takes for the gains to show, as there is little chance it falls from where it sits now.

Chalice of the Void and Mishra's Workshop

Chalice is under 4 tix on MTGO and is a crucial part of the Vintage metagame, falling automatically into Workshop decks. Workshop is closer to 20 tix so I”m less comfortable investing there even though I expect it to rise some. Workshop accellerates huge amounts of mana on the first two turns of the game and often can simply pose a threat that the opponent cannot answer so quickly, especially through the defense of a Chalice. Chalice also sees play in Legacy and less so in Modern, so it only has room to go up. These both fill unreplacable roles in Mono-Brown builds. Since there are two cards in this category I like, I want to distribute my investment evently over the two cards, but still have the total invested in this group equal to thsoe in the other groups.

An uncounterable draw engine is obviously insane, but with no legal format on MTGO its under 10 tix. While it’s restricted in Vintage, a large number of decks in the format play one, and unless you plan to only play one Vintage deck you’ll likely need it. I could see this card doubling if its not printed again. It’s often featured in control decks that play Jace, the Mind Sculptor and Force of Will so they are already quite pricey decks to play. I like including this card in the speculation group, taken from Control builds.

Other cards that are universal tools for Vintage are Fetchlands, Dual Lands, Sol Ring, Thoughtseize, Dark Confidant, Snapcaster Mage, and Tinker. While they are many others, these are some of the other options you could consider as targets. I didn’t elect any of those for various reasons. Either because I expect a reprint in Modern Masters or because their demand in other formats drives their price so high that I don’t expect the additional demand from Vintage to impact those cards as much as the cards I’ve chosen. Are there any I’ve overlooked? After adding these to my speculation pool in MTGO I’ll need to reevaluate my portfolio overall and make sure I still have the right amount invested in each position.