These changes are from mtgstocks.com (1/13 - 1/20) which tracks median card prices.
Lava Axes aside, Modern prices have exploded since the first of the year despite the looming reprints. Between the reprint of shocklands and more private sellers in the market we're experiencing a very dynamic winter PTQ season. Assuming this is something beyond the normal beginning of the season price bump, whatever it is seems to have started with Daybreak Coronet January 1st, though an argument could be made for late October when we saw the spike on Scalding Tarn.

Since then we've seen Auriok Champion, Cryptic Command, Karn Liberated, Kiki-Jiki, Mirror Breaker, Leyline of Sanctity, Serra Ascendant, Thoughtseize and Wilt-Leaf Liege follow Coronet into the realm of insanity. The commonalities I can see in most of these cards are (be sure to comment if I missed something here): casual gold (Thoughtseize and Cryptic Command being the glaring exceptions, and perhaps they should be classified in a different way than things like Auriok Champion), and a single printing that isn't in a traditional base set (besides Cryptic and Kiki-Jiki). These guidelines are not absolutes of course, but they should help us target other potential plays as the PTQ season continues to develop. Here are some of the more interesting targets I've found after looking through MTGO and Paper results. 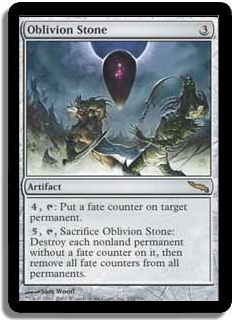 Pros: Commander All-star which gives us an easy out if it doesn't work out in Modern. The board wipe of choice in the budget friendly R/G Tron deck. Its only $4-5 retail and Ebay BINs are selling at that signalling a retail price increase is coming soon.
Cons: It was reprinted in a Commander deck and Mirrodin is a base set though casual demand and age might offset that (see Kiki-Jiki). Karn may have stolen all of the R/G Tron money similar to Daybreak Coronet in G/W Auras.

Pros: Mythic Rare, and an essential staple in the Tokens and Mono White hate lists. Ebay is even with online median signaling a price increase should be coming soon.
Cons: It was a prerelease card that is only a few years old and the decks its a staple of might just be bad. Mediocre demand outside Modern.

Pros: It is a deck archetype in an of itself even if its variants win in different ways, put five players in the top 16 of GP Bilbao. Has a very real casual following that is not completely based on Commander and can be found for $2.
Cons: It's a two of in multiple event decks one of which includes a Thragtusk, might not spike until next year.

Pros: It's in sideboards everywhere (and starting to see some maindeck play as well) because it has no color restrictions and only costs two. Wrecks G/W Auras and the green Infect decks, and protects the creature based combo decks. Entry point is still only $2-3 which is very good.
Cons: Not obviously powerful, and it's still mostly a sideboard card which traditionally don't see huge price spikes though Leyline of Sanctity may be the beginning of a trend. Little demand outside Modern.

Pros: The Worldwake manlands are insane in casual formats. Four of in the RWU Geist deck that won back to back MTGO PTQs last week, as well as the U/W Midrange deck that has been lurking since PT RTR. Its still only $2-3.
Cons: Box topper, and um... I really like Celestial Colonnade.

Pros: The best at what it does, an entry level Legacy staple that also fits in every casual Red deck. Burn decks (complete with Deathrite Shaman and Bump in the Night) have been showing up in MTGO Daily events for a few weeks now and Goblin Guide is their best card while still being $3-4 on Ebay.
Cons: Printed in one of the highest selling sets ever and is also a GP Promo.

Pros: Its from Future Sight (See Daybreak Coronet and Venser, Shaper Savant), and there are a ton of G/W decks in modern. Casuals love sweet dual lands.
Cons: Its already $7 on Ebay and is easily replaceable by players on a budget (Brushland ahoy). Its not a 4 of anywhere and is not essential to any archetype.

Pros: Probably the scariest Affinity threat, and is usually a four of. Decent casual demand.
Cons: Might have to cut the cake too many ways, Affinity has a lot of expensive cards already and we haven't seen enough results to justify a universal upswing (Mox Opal playsets are already selling for $80 on Ebay). It's in a duel deck and has also gone up 30% since January 1st so we might be too late to see further gain.
~

There are a few cards I had thought about when I went about researching the previous list that ended up having glaring problems I hadn't thought about initially.

All hale the greatest of hosers. Did you know Blood Moon has been printed four times!? It also isn't nearly as popular as you'd think it be considering how powerful it is. It doesn't fit into many decks because of the concessions a player has to make in order to not die by his own sword.

Its already $20 on Ebay and sees a smattering of Legacy play, but have you heard of Deathrite Shaman? Outside of some Birthing Pod decks Hierarch is no where to be seen these days.

Its a fringe card in Modern despite being a Legacy staple, and is already over $30 on Ebay.

Let me know if I missed anything sweet, thanks for reading.

6 thoughts on “Insider: What in the World is Going On?”