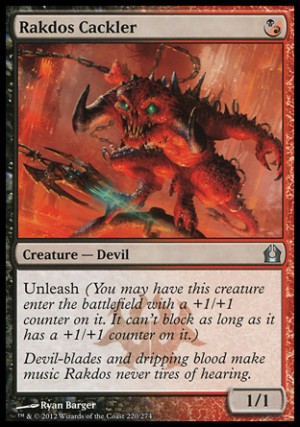 Here at the Ravnica City Zoo, we have everything from wild boars to genetic experiments on display for your viewing pleasure. Don’t worry, you are completely safe. All creatures are confined to their living areas with strong magic and you are protected from any harm. Well, let’s get to it then and take a look at our first exhibit.

Up ahead we have an interesting species of devils. Despite their threatening presence and evil grin, they are quite tame. Watch out though if they break those chains. Once they are off their leash, they become a fast little menace. If you listen closely you may be able to hear the Rakdos Cacklers making music with their chains against the bars.

Continuing on our journey today we come to an interesting forest species. The dryads are a plant-like humanoid species and they even have their own primal language for communicating between themselves. Like most of the other species, Dryad Militants are quite territorial and do not like technology near them for any reason. If you look down into their habitat, you can see we keep them away from the railing here so that you folks can take pictures.

Next up we have a species that creeps out many patrons. These ghosts, called geists by some, are from another world. We are lucky to have such a rare and exotic spirit on display here. They are quite a resilient breed indeed. Reports tell us that you cannot just kill them once, you have to kill them twice or they will continue to attack you in the wild. Theses Strangleroot Geists can be a handful. 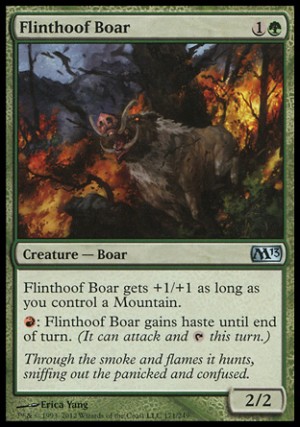 Once again, our next exhibit is another creeper. This habitat is sponsored by the Simic Guild right here on Ravnica. Through their research, they have developed and bred their first experiment. Although we are not sure why they didn’t give it a real name, Experiment One can be a real threat if allowed to roam free. When around other animals, it grows bigger and bigger. Once they're big enough, they can even regenerate limbs when you try to kill them!

As we round the corner here, you can see a dangerous species of boar that we have on exhibit for you. These boars are extremely fast, and depending on the terrain, can be a devastating opponent. This species is called the Flinthoof Boar and whenever possible they live in forested mountains. Experts question why they do this because they seem to burn down the forests they live in. If you get caught in one of their forest fires, beware because they like to hunt prey through the smoke.

In the distance, you hear a loud crash and panicked zoo-goers’ yelling and screaming. A couple Silverblade Paladins surge past your location headed in the direction of the commotion. With them is their captain, Thalia, Guardian of Thraben.

Please folks, remain calm. Follow me over here inside this reinforced building. It seems that the Ghor-Clan Rampager has broken loose again. That beast is unpredictable and extremely powerful. Sometimes it seems to come out of nowhere. Considering the amount of damage it can deal, it takes a lot to restrain, so we will have to conclude our tour here. Please take a pamphlet detailing the exhibits we have seen and the others we did not get to.

Now that’s what I’m talking about! This looks like a real aggro deck and not these things calling themselves aggro we have been playing for the last four months. The mana curve is based on the sligh principle so we should be able to play a creature on turns one, two and three almost every game. I like the creatures I have chosen for their spots, but I may change the numbers depending on what the metagame looks like.

This deck has a ton of things going for it. First of all, now with Stomping Ground we can finally play Flinthoof Boar effectively. That is why the two Mountains are there. The mana base may need some adjusting but I will need more games to determine that. One downfall is that we cannot play Cavern of Souls, but with our curve so low, we shouldn't need it.

Second, this is one of the more aggresive decks we have seen in some time. I played a similar deck when Wild Nacatl and Figure of Destiny were legal in Standard. Experiment One is one of the better one-cost creatures I've seen in Standard and this deck is built to make it grow large.

Third of all, the spell selection is some of the strongest I've ever seen. Ghor-Clan Rampager functions as a better version of Selesnya Charm most of the time and allows you to save your guy and punch through damage. Boros Charm we already know does it all and in epic fashion. Rancor is Rancor. We know how amazing it is.

Finally, we have Aurelia's Fury. I think most of the time it will function like Naya Charm did in my old deck, but the Silence ability will come up a lot too. I think two is the right number, but I could see going to three. Even with the powerful selection of spells, we may need a burn spell as well. It will take some time and tweaking to improve the list even more.

For me, this is the new front runner and I can’t wait to play it. I may need to add a little disruption to the deck depending on what the format looks like. Even something as simple as Searing Spear may help out in a lot of matchups.

As far as sideboarding goes, I know I would want some Skullcracks, but other than that, I’m not sure what is needed. There may be a need for enchantment hate so Ray of Revelation could make an appearance. Thalia seems great against many decks so another copy or two of her is possible. Oblivion Ring is there as well for any hard-to-deal-with permanents. Pillar of Flame could also help out with other aggressive decks like Zombies. Finally, Rest in Peace for the inevitable graveyard combo decks.

That is just a quick sketch of what the sideboard may look like so don’t take it too seriously. I think there are a lot of good ideas there, but we don’t know what the metagame will end up looking like. As always, make sure to change your sideboard depending on what you expect to play against.

I hope you enjoyed a trip to the zoo as much as I did. Does your version of Zoo look different than mine? There are so many options and so many playable creatures we could include that I doubt anyone will agree 100% on my build. So make sure you post yours in the comments for discussion. I can answer any questions about the deck as well.

9 thoughts on “Welcome to the Ravnica City Zoo”