We’ve seen the first tournament results since the release of Gatecrash. No one knows what the meta will evolve into –- remember RTR? We were in combo/midrange everywhere, and then 45% of the meta was R/B Aggro. However, we have an entirely different situation. This time, it’s aggro.

The top decks were actually an assortment of aggro decks. We had Boros, Naya, and even Jund competing for first. However, there were a few cards I was very happy to see in play.

This deck seemed like a great contender, with some mainboard answers to Humanimator, and the resiliency to take on most other decks. 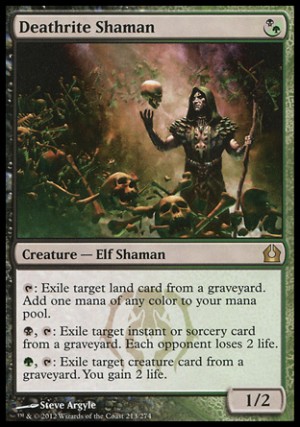 Deathrite Shaman –- This card is one we’ve been seeing in Legacy and Modern lists, and hoping to see in Standard. It has been compared to Noble Hierarch, and the foils are around 400% of the nonfoil price. I can’t stop saying to pick these up. It’s been pretty steady at $15 for a while now, but that’s way too cheap for a card of its caliber.

Abrupt Decay –- Uncounterable removal that gets rid of the majority of permanents played in Standard. This card also has foils at 400%, and is Modern- and Legacy-playable. I don’t think we will ever see this card go down until it rotates out, and it’s back up from there.

Experiment One & Flinthoof Boar –- These guys were great pickups. The Boars are up to about $2 each now, and the Experiments are probably near their peak, at $4 each. They preordered at $2.

I said in my last article that Humans were a big deal –- and I wasn't wrong. They made multiple showings at this event, and the list isn’t terribly different. There are a few cards I’d like to remind everyone of –- and one standout I’d like to get more of myself.

Frontline Medic –- This guy had some mixed reviews, but operates very well. Its sac ability makes control decks play around it, and the battalion trigger makes blocking awkward. At $5 right now, this card is a bit cheap. I see it around $8-$10.

Champion of the Parish –- This card has been mentioned quite a few times around here, and it is probably one of the best one-drops in Standard. I love picking these up around $5.

There isn’t a ton to point out here, as quite a few of these cards are already highly priced (Thundermaw Hellkite, Hellrider), but there was definitely something to mention in this deck.

Stromkirk Noble –- I have always loved this card. I've put it in a ton of decks, and although I've said this about a few cards in this article, it's one of the best one-drops by far. Humans all over the scene makes this a much bigger deal. At $3.50 for a once-$9 card printed over a year ago, I’ll be holding on to my stack for a while.

Ash Zealot –- I have been a bit questionable on this card, but the first time I saw someone hesitate to Snapcaster Mage to Unsummon a creature, I knew this was a thing. At $2.50, it isn’t a terrible card to grab. I am not sure how much upside we have.

Cartel Aristocrat –- This card might be a good foil pickup if Humanimator decks continue playing it. The sac outlet is a necessity, and I could see it at $2-3 easily if the deck keeps it as a 4-of.

Drogskol Reaver –- Somehow, even as a one-of, this was a star in the 5th place Flash deck. It might be something to keep an eye on at $3. We have seen what happens to Dark Ascension mythics that get popular.

Drogskol Captain –- This was a $5 foil at one point, and is down to $1.50. If this deck catches on at all, it could go back up. Lords are always susceptible to increases when they become played -- I guarantee there are tons of casuals who put aside playsets of these.

Dungeon Geists –- This guy has been on my radar for a while, and he had a few appearances in Atlanta. I don’t know how much of an upside I can see for it, but it could be a $3-4 card in a week or two.

Orzhov Charm –- I mentioned this before, and it did see some play. I would love to see it as the next $2 charm, and I love it in foil at $3.

I’d love to know what cards you guys found interesting, especially foils –- feel free to let me know what you think!