I’ve only been back from the Bahamas for a couple days, but there are already plenty of results in the three constructed formats that I’m trying to tackle, and I already have quite a few observations about all three. For this week’s article I’m just going to break into what I’ve done and what I’ve discovered.

I’ll start with the format that I’ve done the least with thus far. Last night a bunch of Minnesota players got together and did a bunch of Modern battling. On my part I mostly just jammed Burn against other decks and was relatively happy with how the deck played out. The list I was playing was pretty stock:

4 Scalding Tarn
4 Arid Mesa
4 Mountain
3 Blood Crypt
4 Blackcleave Cliffs
1 Marsh Flats
My testing more or less confirmed my hypothesis about where WotC’s Modern philosophy leads us: Burn is The Rock. Every game where I drew reasonably was close and I felt favored in most games where I had Goblin Guide. The ability to consistently goldfish on turn four makes you a formidable opponent for basically every deck. Even a turn three Wurmcoil Engine out of Tron is beatable, but it might mean you have to Searing Blaze your own blocking Goblin Guide/face.

Burn is probably the worst deck for actually abusing Deathrite Shaman, but the card definitely does work. Getting extra value out of burn spells and enabling such turn twos as “Play Ash Zealot, kill your Deathrite Shaman” is a big game.

If you like playing Burn and are planning on PTQ-ing I must say this is the first format where there are basically no decks that I feel are truly atrocious matchups now that Skullcrack is a card. You’ll need to be wise about Lightning Helix, but everything is very winnable. Even Kitchen Finks is quite beatable, though I think the Pillar of Flames are a necessary concession just for games where you have multiple Guides and they have Finks. It’s also not noticeably worse than other options such as Burst Lightning which you will end up kicking considerably fewer times than you’ll end up caring about removing creatures from the game. On this note, I would consider switching out a Mountain or Blood Crypt[/car] for a [card]Stomping Ground for Deathrite Shaman. You can almost always afford to be shocked by your lands in my experience, so this inclusion is basically free.

Going through dailies it’s looking like Post, Temporal Fissure and Monogreen Stompy (ewwwwwwwww) are the three most popular decks. For the life of me I can’t figure out why anybody would want to play Stompy, but you’re almost guaranteed to run into it once or twice per daily event, so it’s very important to know how your matchup against the deck goes!

As of now I’m messing around with Delver a lot. I have the following cards locked in as absolute and the rest of the deck changes rather rapidly: 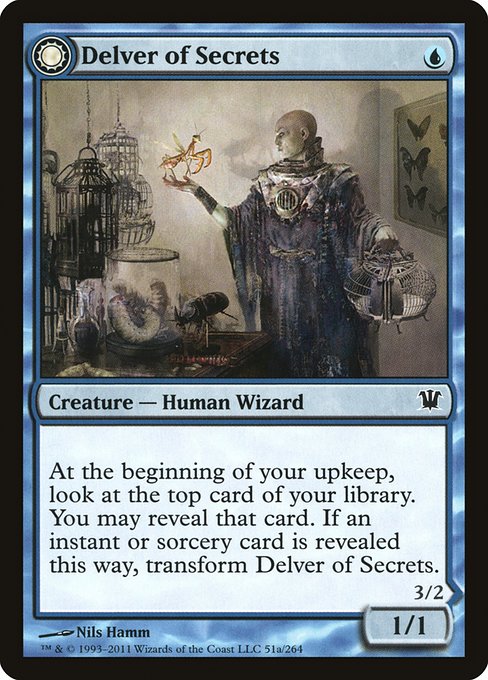 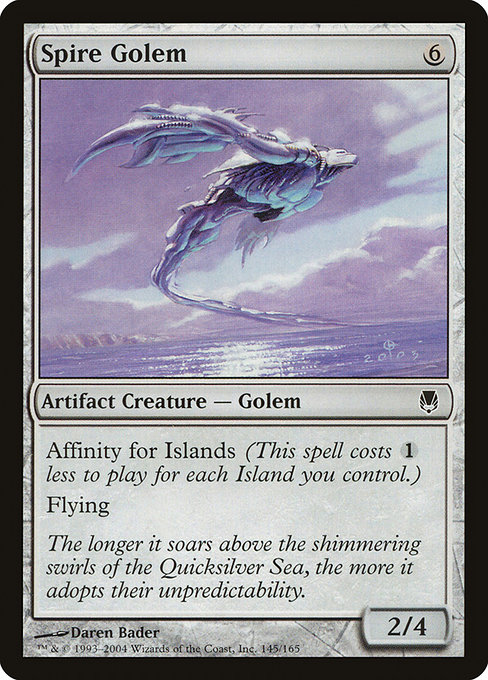 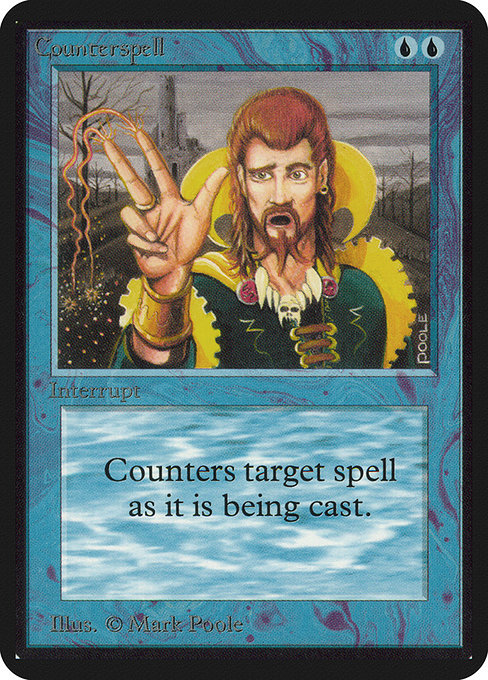 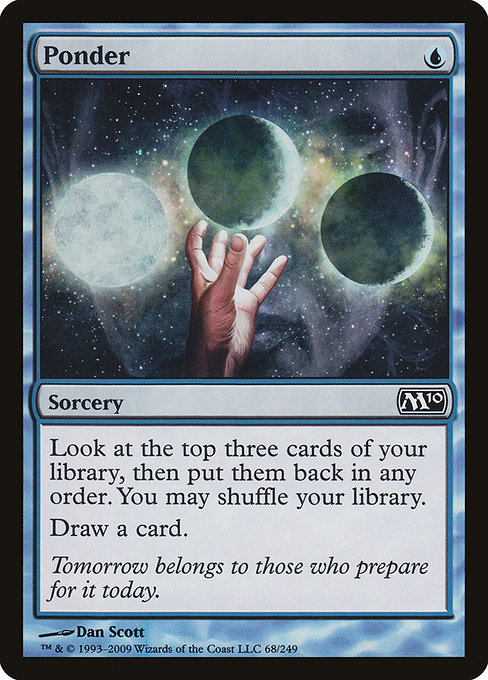 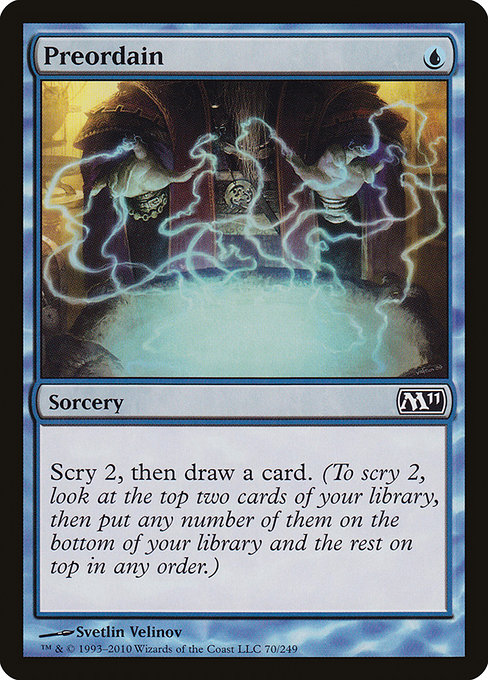 Good play and Stormbound Geist out of the board have made all flavors of Post to be jokes of matchups, though I don’t have much experience against Temporal Fissure at this point.
One thing that I’m trying to figure out is whether or not I want Spellstutter Sprite in the deck. I know for certain that I don’t want the half-card that is Cloud of Faeries, but not having Cloud doesn’t invalidate Spellstutter. It still counters relevant spells in literally every matchup, the question is whether or not it’s just to have around on account of the prevalence of Stompy. I don’t know the answer at this point, but switching to another creature that blocks well (Frostburn Weird) might be the play.

I still have a bit of uncertainty about the Stompy matchup, but I have no doubt in my mind that it can be made winnable. I mean, the opposition is freakin’ Monogreen. One card that has been suggested to me is Coral Net, but I’ve yet to test it. The card looks pretty miserable on the surface but I’ve absolutely been wrong before. It might just be the best answer to Scattershot Archer.
I have yet to see anything to diminish my faith in Delver MUC. Being an 18 land deck with a fistful of Cantrips allows for such insane consistency that if your strategy is at all viable you will win matches.

It’s looking like I was correct in predicting that the Dual reprints would make the most dramatic impact on Standard of any Gatecrash card. Other cards, most noticeably Boros Reckoner, are making splashes but nothing has really changed on a fundamental level other than having significantly better mana.

I think that Esper with Blind Obedience is a pretty cool concept. Just the thought of having an Extort engine with Lingering Souls and Think Twice gets me a little giddy, but right now there is a different deck that I’m more excited about…

I just can’t give up on Rakdos's Return. I’ve been messing around a bit with Jace+RR Grixis but I still need to do a lot more testing before I figure out exactly where the deck wants to be. Right now I know for sure I need Snapcaster, Rakdos’s Return and a bunch of removal. Everything else has been moving parts.

As for win conditions in the deck Nephalia Drownyard is an enticing option, but I think Esper is just a dramatically better Drownyard deck. That being the case my current guilty pleasure is playing one of each of the following two cards: 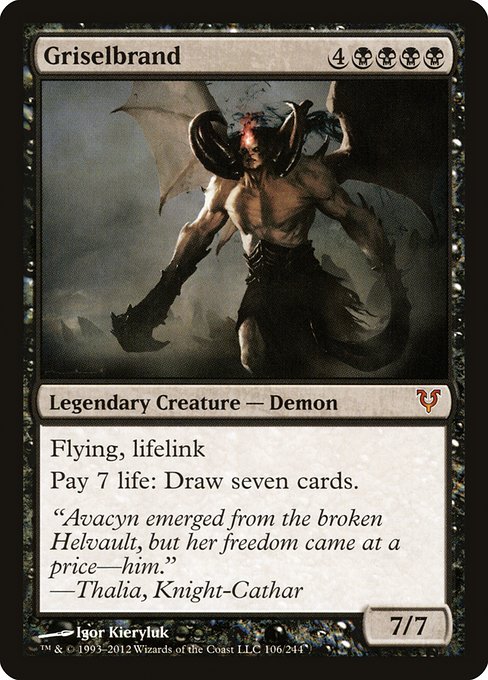 Basically, the worst thing that happens when you cast a Griselbrand is that you draw seven cards. Let’s face it though, there is no cooler spell to hardcast in Standard. Possibly not in any other format either. It might turn out to be the wrong way to go about battling, but I’ll be damned if it isn’t the most satisfying.

The biggest thing that I’m trying to figure out is how many, if any, Counterspells to be playing. It seems to me that you need to play too much sorcery speed removal to make your Counters particularly good against aggressive decks and that the Sphinx's Revelation decks are so much better at permission than you that playing counters for them just feels foolish. I think I’d just rather be Duressing and Slaughter Gamesing.

I apologize for only having the one publishable list, but it’s really too early in testing to get married to too many things. The most important thing to remember when working on decks is that every slot needs to be justified and as some parts move around other parts get better or worse. The more I discover, the more solid the lists get, but I find that at this stage broader discussions are of much greater value.

I’ll absolutely be working on Grixis and Pauper in the near future, so hopefully I have a solid list of one or the other for next week. Until then, thanks for reading!