When to sell. This is a topic that every speculator thinks about. On MTGO, there are some predictable price cycles which provide guidance on when to sell cards in order to secure consistent profits. Always try to keep the bigger picture in mind when considering when to sell.

Cards will fluctuate in price based on a few broad trends. Redemption is one of those drivers, which I have covered extensively in previous articles. For background information on redemption and why it matters, go here. In short, following redemption patterns means you are buying mythic rares that have rotated out of Standard. After a while, prices tend to rise as redeemers convert digital sets into paper. The plan is to buy cards when they hit their price low in the Fall, and then sell after redeemers have driven up the price by buying up the available copies.

Suppose you were reading up on redemption in the Fall, decided to follow this strategy and loaded up on some mythic rares from Scars of Mirrodin (SOM) and Mirrodin Besieged (MBS). Both sets have appreciated nicely since November, but is it time to sell? The answer is maybe.

Generally speaking, the window to sell cards based on this strategy stretches from the end of March into the Summer. Selling now would not be incorrect. Further price gains on these cards might not materialize. If digital prices have appreciated enough, redeemers might start looking elsewhere for opportunities.

On the other hand, for a set like Zendikar (ZEN), strong demand for the fetchlands kept paper prices rising, which ensured steady demand from redeemers for digital cards. Have a look at the chart for Nissa Revane. The price increases on this ZEN mythic rare lasted right up until redemption for ZEN block ended in November of 2012. 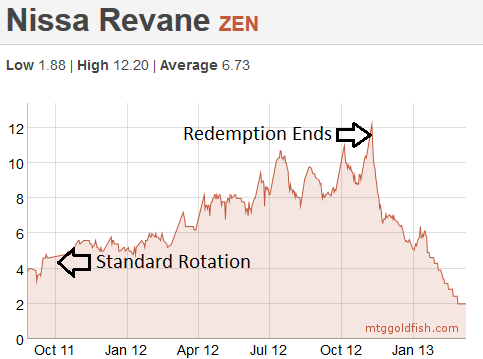 There is no sure-fire way to know exactly when to sell mythic rares in this case, but being approximately correct is pretty good. April through August should be your target sell period for cards following a redemption strategy.

The Modern PTQ season provides a much clearer sign for selling. Most Modern staples will find their in-season price level by the beginning of January. Often this won't be the highest price a card reaches during a given season, but it will be close. Take a look at the chart for Grove of the Burnwillows from the past season. 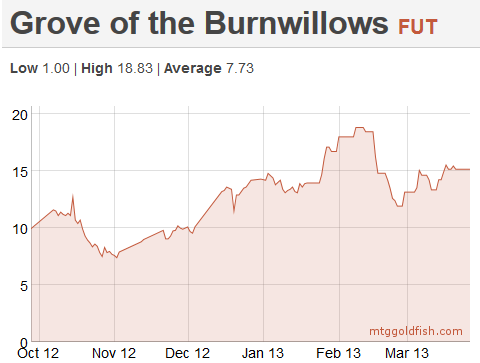 You could have bought this card at the end of October for around 8 tix. At the start of January, the sell price was about 14 tix. That would translate into profit of about 4 tix or 50% using bot prices, i.e. taking a 2 tix hit in order to sell to bots. There was a mid-season price increase on this card, so maximizing profits would have meant selling in the second week of February. But this type of mid-season price spike is not typical. Have a look at the chart for Dark Confidant. 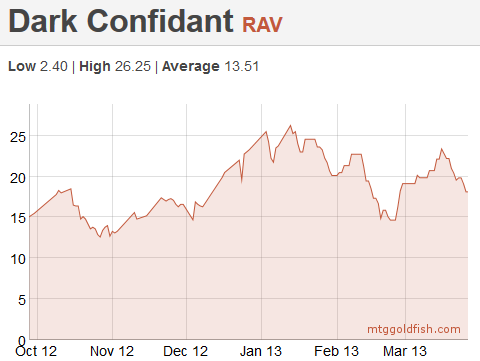 It shows a similar pattern in the lead-up to the season, with a low at the end of October and then rising into early January. However, unlike Grove of the Burnwillows, there is no mid-season price spike. In fact, the price trend is mostly down during the season. Selling at the start of January would have secured the bulk of profits and would have avoided the downswing.

Avoiding a downswing like this is very important. When speculating, it can be tempting to look back in hindsight at the price you could have sold at last week or the month previous. If you were holding Dark Confidant at the start of February, you might look to the January highs as reachable and decide to hold on just a bit longer to try to squeeze out a few more tix.

Holding on longer would have had two effects. First you are chasing previous highs which might not return. After a brief price bump in early February, the trend down resumed. If you didn't unload at 24-25 tix in January, what are the chances you unload at 23 tix in February? And not unloading means you hold all the way down to 15 tix which Dark Confident reached near the start of March. Holding on longer exposes you to more risk.

The second effect is subtle, but important. Securing profits in early January frees up tix to invest in other cards! Holding onto a card for a further gain of 5-10% might sound good, but there are usually other opportunities around with the potential for much higher gains. If your capital is limited, then chasing maximum returns means you might be ignoring better opportunities.

Being approximately right is much better than chasing maximum gains. The types of in-season fluctuations seen in the charts for Grove of the Burnwillows and Dark Confidant are driven by shifts in the metagame, the banning and/or unbanning of cards and new sets shaking up a format. It's almost impossible to accurately predict how all these effects will play out for a given card. But we know with perfect accuracy when the season begins and ends. Selling Modern staples in early January will ensure you cash in on the bulk of the profits, while avoiding the variance of the season.

Avoiding losses is often a good reason to sell. Cards that are expected to drop in price are prime candidates. For example, all cards from Innistrad block and M13 are expected to drop over the next six months. Therefore, selling any and all cards from these sets would be prudent at the moment. There will be particular cards that spike up as a result of shifts in the metagame, but again this is unpredictable. Stick to what is knowable. And what is knowable is that the trend for Innistrad block and M13 cards on average is going to be downwards until the Fall.

Changing circumstances is one final reason to sell. Suppose you did your analysis and decided you would take a position and buy a bunch of copies of a card. Sometimes this will pan out, other times it won't. But before abandoning a position, think about your original analysis. Has anything changed? Maybe nothing has changed but the card hasn't found a home yet and is still under-appreciated. In this case, and other things being equal, selling would be incorrect.

However, if the original analysis was faulty or a large change to a format has rendered your idea a poor one, then it would be time to sell. In this case, I'm reminded of playing Texas Hold 'Em. New or bad players would hold on to their hands far too long, often going to the river for flimsy reasons. If the reasons for staying in a hand change from the flop to the river, you are probably going to lose that hand. Likewise, if your reasons for buying a card are shifting over time, then you are closer to gambling than speculating.

This is an idea that forum user Thoughtlaced suggested which I am going to try out every week. It's a brief rundown of what I am buying, selling and looking out for in the market. It's also inspired by Sigbits from QS's Monday columnist. If you feel this would be a helpful section, let me know in the comments!

14 thoughts on “Insider: When to Sell on MTGO”