As I'm writing this, day one of GP Kansas City is already in the books.

Even though Modern PTQ season is still a couple months away, it’s always worthwhile to stay up to speed on the metagame for finance reasons. The format is still young enough for a breakout strategy to appear at any event. Additionally, the banning of Second Sunrise and the release of new sets could impact the metagame.

This morning (Sunday) I took particular note of what decks appeared at top tables. Not surprisingly, Birthing Pod decks continue to display their strength and robustness. I fully expect this archetype to remain strong going into Modern PTQ season.

Jund also remains strong, as do an array of other consistent strategies. Tron, Splinter Twin, UWR Control, and even Scapeshift all put up consistent results. It is interesting to note how popular combo decks have become in recent months. Jund and Tron continue to thrive, but combo strategies are heavily represented towards the top and many pros are on such strategies.

What do these results imply for the upcoming Modern season? Are there still opportunities to acquire cards for profits? Let’s take a deeper look and find out!

Birthing Pod – The Elephant in the Room

Hey guys, Birthing Pod is really good! Oh, you all already knew that? Then why is this card still worth only a few bucks!? 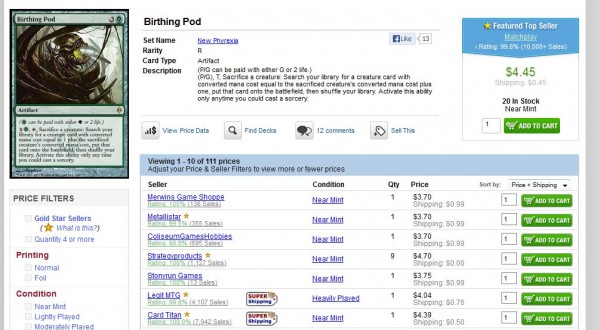 Well, while this card seems like it would be a ton of fun in EDH, Modern is the only format driving demand for it. But shouldn't that the same for Chord of Calling?

I think what we’re seeing here is a difference in print run between an older set like Ravnica and a newer set like New Phyrexia. As Magic gains in popularity, more and more cards of a given set are printed. My suspicion is that many more Birthing Pods exist than Chord of Callings. The invention of the mythic rare in recent sets also magnify this difference. Back in Ravnica block, there were no mythics.

With all this in mind, I still think Birthing Pod can go higher, assuming it isn’t banned from Modern for power concerns. It may take much longer, and the price ceiling will be much lower, but the potential is certainly there. After all, with such a strong showing demand will certainly be sustainable.

Want to invest in something with even lower risk? How about the namesake of the Melira Pod deck herself, Melira, Sylvok Outcast?

Melira hails from the same set as Birthing Pod, so again the price ceiling will be much lower. But this morning I noticed a major discrepancy–-foil Meliras are currently sold out at SCG with a price tag of $6.99. Foil Birthing Pods on the other hand sell for $24.99!

This is a major gap. Granted, all nine Pod decks obviously played Birthing Pod at the GP, but not all decks played Melira, Sylvok Outcast. Still, the Melira version of the Pod deck represented five of the nine total Pod decks at the top tables. Clearly this is a preferred variant–-I expect these foils to rise. So much so, that I’m going to buy a few right now (don’t worry, I won’t make you wait).

There’s another linchpin of the Melira Pod deck worth keeping in mind. It’s a card many QS subscribers likely already own. While I’m not an advocate of going excessively deep on a given speculation target, I want to emphasize the importance of an underappreciated land.

Anybody else see this Tweet? Comments like this reassure me that Scars fast lands will eventually pay out. My hope is that we finally see a price bump this Modern PTQ season. And it’s quite possible Razorverge Thicket goes from underloved and underappreciated to the most played version. Buying a few more copies for under $2 can’t be bad. But I wouldn’t pay more than that.

I’ll admit I’m incredibly biased–-I have been on Melira Pod ever since Modern was “founded” and I’ve enjoyed the format ever since I first gained infinite life and dealt infinite damage. But there are certainly other decks worth noting from the GP.

Jund is still a deck, and I believe the higher prices for Dark Confidant and Tarmogoyf will stick as long as they aren’t printed more prior to the PTQ season. Liliana of the Veil is of particular interest to me nowadays-–as rotation out of Standard looms, her price has actually dipped a tiny bit.

Still, the curve seems more flat than downward and I don’t expect her price on mtgstocks.com to dip much below $40 if at all. Demand in eternal formats will keep this card higher regardless. She may never hit $100+ like Jace, the Mind Sculptor, but her playability in both Modern and Legacy means demand on this planeswalker may one day exceed that of Jace. If you want or need copies, it may be best to just pull the trigger now rather than wait for a further dip which may never happen.

Speaking of dips that will never materialize, I’m willing to wager that Snapcaster Mage is appearing in some of the UWR control strategies. Flashing back a Path to Exile or Lightning Bolt, two of the premier removal spells in Modern, can provide so much value. Demand may fade right now, but SCG still has these stocked at $24.99 (although they have dozens of copies in stock). Price memory and Eternal demand will likely keep these above $20 as well.

By the way, both Liliana and Snapcaster keeping their elevated prices (especially in foils) makes an investment in Innistrad boxes seem pretty solid. Just saying…

I’m writing this article Sunday morning, so I don’t even know which decks will make Top 8. I will make a rather obvious prediction-–-there will be at least one Pod deck in the Top 8. Okay I’ll go bolder. I expect two Pod decks in the Top 8, and at least one of them a Melira Pod variant.

But one Grand Prix isn’t enough to dictate an entire metagame. Much more evolution will take place in the coming months. Will Scavenging Ooze disrupt strategies that revolve around Kitchen Finks and Snapcaster Mage? Will Wizards ban or unban something? Will M14 finally bring enough Merfolk to make Corbin’s Merfolk dream come true in Modern? At least two of these three questions are uncertain–-I’ll let you decide which ones.

In the meantime, investing in the backbones of the most consistent Modern strategies will be the way to go. And while some cards have higher price ceilings than others, the general trend will continue to rise as Modern increases in popularity.

Modern Masters will likely get more people involved in the format, and this will inevitable drive prices higher. Owning cards which haven’t shot up in price yet is a safe way of making solid gains with minimal downside risk. That’s exactly why I suggest Birthing Pod over Chord of Calling and foil Melira, Sylvok Outcast over foil Dark Confidant. Buying low and selling high remains, as always, the best approach.

24 thoughts on “Insider: A Look at GP Kansas City”