Cube draft returns next week to MTGO and will be awarding Rise of Eldrazi (ROE) booster packs. Coincident with Cube drafting, Triple ROE draft queues will be available so that players can use their prizes.

Generally a period of Cube drafting is a good time to pick up out-of-print staples that are coming onto the market. However, diving into recent history might give us a clearer perspective on how to approach buying and selling cards during Cube.

ZZW was awarded for Cube just prior to the release of Gatecrash. Scalding Tarn and Lotus Cobra both fell in price well into the release period, but Lotus Cobra only fully bottomed out months later at the end of June. Scalding Tarn dipped along with every other card from ZZW, but as a Modern staple, it has bounced back substantially in recent weeks, reaching an all time high of 24 tix. 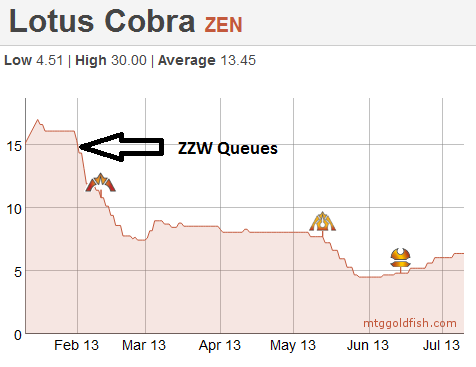 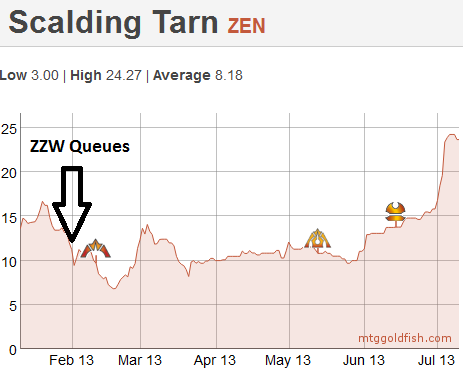 The presence of a high value cycle such as the fetch lands seemed to encourage a lot of drafting. So much that a fringe Modern playable mythic such as Lotus Cobra has taken months to bottom out and is only now showing signs of recovery. In hindsight, the fetch lands were a tremendous buying opportunity, but more fringe cards should have been sold and avoided.

The question for speculators is whether RRR queues are going to be similar to the ZZW queues and tank the value of non-staple mythics and rares.

Two factors matter the most in the popularity of an out-of-print draft queue, playability and the expected value of the cards opened. Zendikar-Zendikar-Worldwake (ZZW) and triple Rise of the Eldrazi (RRR) were both quite popular draft formats that had strong interest. Playability is not something that is easily measured, so let's assume that playability will not make the difference in comparing ZZW with RRR.

Holding playability constant, repeat drafting relies on the value of cards drafted. The winner of a 4-3-2-2 draft definitely has enough to continue to draft at no extra cost, but the finalist could conceivably fail to make enough value from their drafted cards to scrounge up 2 tix for the next draft. The 3rd through 8th place finishers will definitely need to crack some value to continue to draft.

The hypothesis in this case is that the value in ZZW was much higher, and thus encouraged more extra drafting than RRR will. Testing this hypothesis will give us a guide for speculating on ROE rares.

To test the hypothesis, I will add up the average value of the rares and mythic rares for 24 packs. On average we should expect three mythics per draft (one in eight boosters) and 21 rares.

To calculate the average mythic for ZZW, I'll take historical values from January 31st, 2013 of every mythic and rare over 1 ticket and round it to the nearest ticket. Mythics and rares less than 1 ticket will be valued at zero. For RRR, I'll do the same using prices from today. (Prices courtesy of MTGGoldfish.com, which tracks prices from MTGOTraders.com.)

Overall, the mythic rare slot from the average RRR draft is quite close to the average ZZW draft. The presence of Jace, the Mind Sculptor in WWK is balanced out by a number of worthless mythics, while ROE has a much higher density of mythics in the 10+ ticket range compared to either ZEN or WWK.

On the other hand, for rares from ZZW, you have two packs of the fetch lands which tilts the scales heavily in favor of ZZW. The rare slot for RRR pretty much begins and ends with Splinter Twin. With so few money rares, RRR does not compare favorably to ZZW in terms of value for drafters.

Adding It All Up

In total, the value of cards cracked in a given eight-man draft at the outset of ZZW queues was about 35 tix. If a draft is usually about 13 tix, that means that out of every ZZW draft, about 2.7 players got enough value in cards to draft again.

As it stands right now, RRR will only contribute about 23 tix in value from the cards in a draft, meaning about 1.8 players on average will crack enough value to be able to draft again, based solely on the cards that they draft.

If we think about how many extra drafts this value could turn into, we might consider the following. Suppose that initially there is enough interest to fire 100 drafts. Then players will only draft if they can sell their cards for enough tix to draft again. The next round of drafts is an echo of the initial drafts. The ZZW echo is bigger than the RRR echo because of the extra value found there, mostly in the fetch lands.

Each echo will be smaller than the last. Eventually drafting dies out because players have run out of tix in order to draft. Note, this ignores pack prizes and fluctuating value of the cards. The chart below summarizes the results of this idea.

This projection suggests that, for every 100 initial drafts, the extra value in ZZW would result in 22 additional drafts compared to RRR. Clearly we should expect fewer RRR drafts to fire than ZZW. This means price drops on Modern staples and playables will be smaller, and prices will recover faster.

For the average player, the normal response to out-of-print draft queues appearing on MTGO is to panic-sell any card from the given sets worth a few tix. The fear is that drafters will flood the market with cards, so it's better to sell out and rebuy after the queues finish up.

In the case of ZZW, this definitely turned out to be true for non-staples. If you had sold your Lotus Cobras and Ionas, you could have bought them again at a much lower price a few months down the road.

In light of the expectation that ROE queues will not flood the market for non-staples as much as the ZZW queues did, then any panic selling over the coming week should be seen as a short-term buying opportunity.

Target the valuable mythics from ROE that show up in Modern. Ulamog, Linvala, Emrakul, All Is Dust and Vengevine should be the mythic targets, and for the rares it basically begins and ends with Splinter Twin.

If players panic-sell these over the coming ten days, the expected price drop should be observable. With a relatively low increase in supply as a result of RRR draft queues, this will be a prime week to pick up Modern staples and other playables from ROE.

This is a brief rundown of what I am buying, selling and watching in the market in the last week.

6 thoughts on “Insider: The Return of Cube and ROE”