The summer can be a quiet time for the game of Magic but Theros (THS) previews are starting up next week and excitement is building for the Fall. Prices on redeemable sets have also started moving in interesting ways, showing distinct breaks in trend. I've been gathering data for the updated MTGO-to-paper ratio and this week I'll present the weekly level of the ratio for each redeemable set.

For new Quiet Speculation readers, be sure to check up on the original MTGO-to-paper ratio here, and then the overhauled ratio here.

The gist is that redemption is a key factor in how the MTGO economy operates. When prices between paper sets and their digital equivalent are out of whack, redemption can be the conduit for them to equalize.

The MTGO-to-paper ratio is an attempt to identify which sets have value to redeemers, and thus guide speculative purchases. The ratio is calculated by taking the price of a complete set from Supernovabots, and dividing it by the TCG low value of that set.

Scars of Mirrodin Block and M12

Presented below is the chart of the digital-to-paper ratio of Scars of Mirrodin (SOM) block and Magic 2012 (M12) since the second week of June. These are the sets that rotated out of Standard last year.

It's not pictured here, but they found their bottom as whole in early November last year. I wrote about this and referred to the ratio in my column at that time last year. Note that the MTGO store ran out of complete sets of Mirrodin Besieged (MBS) in the spring. Back in June SOM, M12 and MBS were all at about the same level, but since that time the MTGO value of MBS has eroded relative to paper due to losing the link that redemption provides. 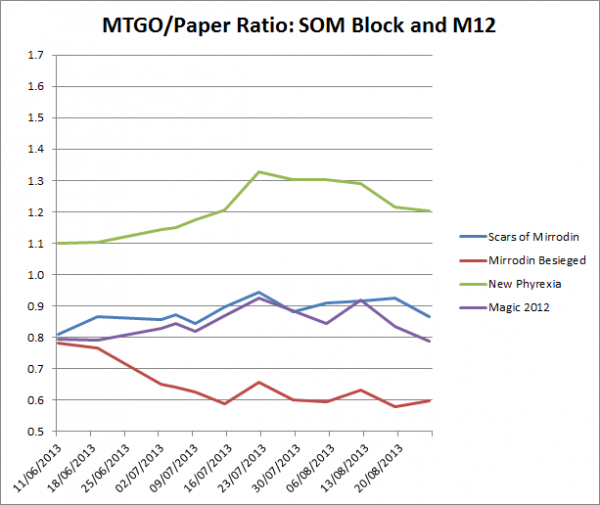 There's probably going to be one more bump up in the metric for NPH, SOM and M12 just prior to redemption closing. The redemption cut off dates for these sets are in the first week of November. This does not suggest that they are a good value at this time, but if you have some mythic rares from these sets kicking around this will be the last window to capitalize on the redemption value on these cards.

What's more important is to observe how the ratio moves over time and what we might expect out of sets that are rotating out of Standard.

These sets are set to rotate shortly with the arrival of Theros (THS). The ratio for both Innistrad (ISD) and Avacyn Restored (AVR) have both recently peaked and started downward. This looks like the start of the broad decline in price prior to rotation. 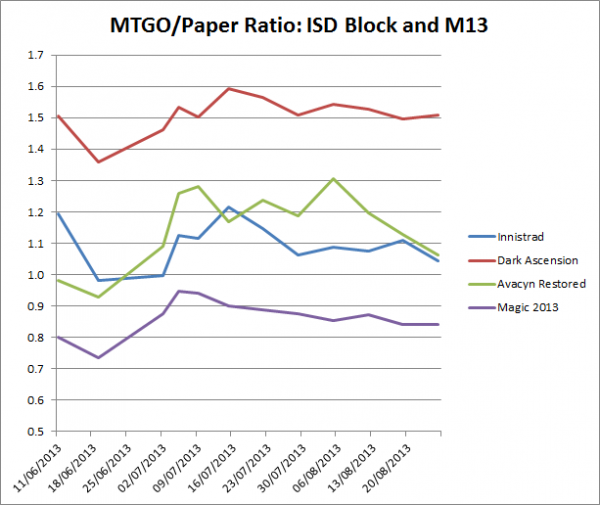 Some good buys on junk mythic rares have started to show up. The AVR mythic rare angels should be targeted in the one-to-two tix range. Mirror-Mad Phantasm already fell to 0.3 tix and has bounced back to 0.45 tix. In general though, I am steering clear of these sets until October. Nibble at a few good deals and casual cards, but any card currently played in Standard will see lower prices in October.

Dark Ascension (DKA) has the highest ratio among all redeemable sets. The paper price of a set of DKA is low and dropping further, and the digital price has yet to catch up. This suggests that redemption will not be a factor in supporting the price of DKA mythic rares until the ratio falls into the 0.8 to 1.0 range. Thus, one should avoid speculating on junk mythic rares from DKA at this time.

Return to Ravnica Block and M14

Return to Ravnica (RTR) and Gatecrash (GTC) have been tracking each other quite closely, and both have headed up in recent weeks. It looks like digital prices have been on the move up in anticipation of Fall Standard. Both presented good value during M14 release events, and should continue to appreciate in price into October. If the ratio on these increases into the 1.2 to 1.4 range, I'd consider that a strong signal to start selling. 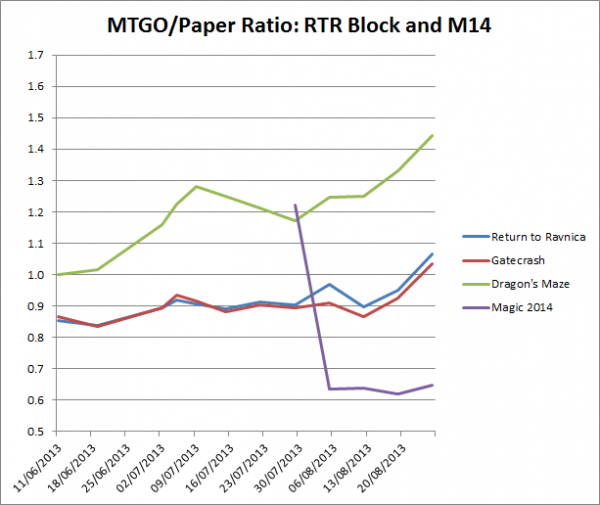 Dragon's Maze (DGM) has also headed higher, but it was already at quite a high level. One interpretation of this is that paper prices are too low relative to MTGO. There's nothing really actionable on this on MTGO, but I think it's interesting to observe.

M14 on MTGO looks like it bottomed in price on Aug 21st. The ratio also happened to bottom on the same day. Redemption for M14 opened on Wednesday, August 28th, so I think we've seen the lowest prices for the mythics as a whole. The junk mythics will probably appreciate so prices of less than 0.35 tix on these won't occur again. As for regular rares, I continue to avoid buying into them and will wait until the middle of September.

One thing of interest is to notice is the elevated level of third sets relative to the other sets from a given block. The ratio for NPH is much higher than SOM or MBS. This is also visible for honorary third set DKA as compared to ISD and AVR, likewise for DGM compared to RTR and GTC.

Comparing like to like is one way to infer some expectation and is a technique used by almost all Magic players and speculators when trying to assess the value of a new card. We should do the same when thinking about the ratio and its level for different sets.

This idea will be worth keeping in mind when considering when to buy and sell cards from a third set. RTR and GTC are good comparisons because they are both large sets with shocklands. For the MTGO-to-paper ratio of third sets like DGM, it's best to compare its level to other third sets, like NPH and DKA.

October and November will present the biggest buying opportunity of the year as ISD block and M13 rotate out of Standard.

Modern-playable mythic and regular rares should be targeted and then held until Modern season. Other mythic rares will appreciate in price as redeemers capture the value in the online sets that are depressed in price relative to paper. The MTGO-to-paper ratio can be a guide to identify a price bottom in general, and the preliminary evidence presented here suggests ISD and AVR should be favored over DKA.

6 thoughts on “Insider: Checking in on the MTGO-to-Paper Ratio”