It’s happened. We’re there. The time has come. So on and such.

Winter is no longer coming, it is here. And now that it is, there’s money being made everywhere. Right?

Few things I want to address. The first is the Myth of Making Profits, something I’ve talked about before and which is especially relevant right now. It’s great that you got your Jaces at $10 and now they’re $25. But until you cash out (whatever your outlet is), you haven’t made a penny. Keep that in mind.

The second thing I summed up in a tweet a few days ago:

Let’s address these in order before we talk about some individual cards.

If you didn’t read the link, the TL;DR version is this: Until you actually cash out your cards, you haven’t made any money, and your specs have not paid off.

Now let’s look at Theros. Several of the cards I predicted to spike did, including Anger of the Gods and Elspeth, Sun's Champion, but remember that they’re likely at or near the peak right now. Having them to play with is great, and if that was your goal, congratulations. I hope I saved you some money.

But if not, and you want to flip some of these cards, you need to do so in the next two weeks. Lock in your profits now while you can and use that to fund your next few drafts or the rest of your Standard deck. Just don’t let yourself hold onto the cards for too long, happy that you “made money,” while buylists begin to drop.

So let’s assume you did the right thing and got in on these cards while you could. What’s the play now?

In short, it’s probably time to sell. Yes, the Pro Tour could shake things up and push some of the premier cards even higher, there’s also another few weeks of busting open Theros until then, and I would refer you to the tweet above. And, remember, everyone is throwing their cards upon TCGPlayer to sell, so the race to the bottom is already in effect.

Let’s look at what has been my favorite spec target for the last six months: Jace, Architect of Thought. 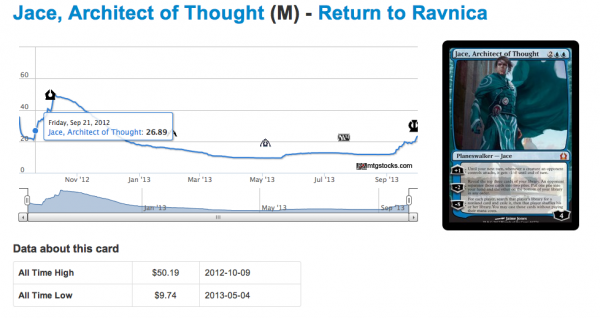 We see that our friend has gone back over $20, exactly like we predicted he would. He’s all over the Top 8 and will probably continue to be for the coming weeks.

I don’t think a firesale is in order like with Elspeth or Anger of the Gods or anything else, but I do think it’s probably time to take our profits and walk away. To be honest, I don’t really see Jace going below $15 and I could see him spiking again to $30-35 after the Pro Tour, which is why I’m slowly unraveling my position rather than just dumping them all at once.

So really it’s all about how comfortable you feel with your position on Jace. If you got in cheaply, it’s probably time to sell and be happy with more than a double-up. On the other hand, if your “in” price isn’t as good, maybe you see if you can squeeze a little more out of him.

The major reason I’m not in a rush to unload these is because the blue man group of one is just really good. Even if the meta shifts or more copies hit the market, this is not a buyout situation, nor is it a one-week spike. Even if it doesn’t go any higher it’s going to come down slowly, which means we’ll see the writing on the wall and can proceed from there.

So, back to the “What’s Next” question, I want to talk about one theory of unloading a spec. There’s not an official name or anything (or there could be in investing theory, I wouldn’t know). Anyways, I’ll call it the “break-even” practice.

Say we own 20 Jaces that we specced on at $9 apiece. Today after fees we can probably get $18 for these. In order to recoup our initial investment of $180, we need to sell ten copies. That leaves us with ten copies to hold.

I don’t always advocate this (because usually I feel like it’s just correct to sell once you’ve made your money), but in this case I think applying this strategy is valid. The major reason for it is that Jace could dip a little in either direction, but he’s more likely to be $30 two weeks from now than $10. With the upside that high and the risk minimal, I think it’s worth playing the market a little here, and seeing how it goes.

It could be a bust and you end up selling the last ten Jaces for something like $14-15 a copy, but even at that you’re still profiting. On the other hand, it exposes you to the opportunity to get $25 a copy, all while guaranteeing you’re still making a profit on the spec as a whole.

Keep in mind that I approach speculation with a conservative viewpoint, and I’m not the all-or-nothing type of guy. I’ll draw the last round of FNM to split packs every time instead of playing it out, and I take the same approach to speculation. But at the end of the day it makes money instead of losing it, and that’s how I’m approaching selling my Jaces.

What About the Rest?

While Jace is a bit of special case, remember that the rest of the cards that spiked this weekend are getting a sell call. One interesting note is that green-white didn’t make much of an appearance at all, which I’m not sure will be representative going forward. I still like holding onto those cards (other than Fleecemane Lion) until we get some more info.

Whether you’re deep into your Theros specs or just have a few Return to Ravnica goodies, this weekend was a profitable one for you, as long as you allow it to be. Sell or trade away some of those specs now to cover your costs, and reap the benefits with the rest.

10 thoughts on “Insider: The Spike is Here. What’s Next?”