My name is Sigmund and I have a problem. In fact if I review the “Money Where My Mouth Is” thread in the QS forums, it appears many of us have this problem.

We are all sitting on way too many shocklands.

Now that normally would be a terrific thing, but a number of factors have been working against the value of shocklands, leading to an unattractive price curve. Many of these lands have a shape similar to this one:

The perfect storm was brewing. We lost important mana-fixing lands in both the Innistrad and the Core Set check lands. This means that supporting a deck of three or more colors became dependent almost solely on shocklands. Thus demand was likely to spike dramatically. What’s more, Modern season was supposed to be starting in the near future, driving demand up even higher.

Combine that with the fact Return to Ravnica block won’t be opened nearly as much now that Theros is released, and the trajectory for shocklands was looking spectacular. Being savvy MTG speculators, the QS community moved accordingly. We all acquired aggressively–-if we pooled all of our shocklands, I’d wager we could sell them all for a BMW 3 Series or comparable car. Or at least, we could have if the unexpected hadn’t occurred.

As it turns out, Wizards of the Coast didn’t want Modern season to come so soon. Maybe they want more time to review the banned list before the next Modern PTQ season. Maybe they are planning to launch Modern Masters 2 before the season. Or maybe they just felt like shaking things up to set the speculator community back.

Whatever the motivation, Modern season has been delayed significantly. This means the expected demand for shocklands from the PTQ grinders will have to wait.

Then Theros launched, and this happened:

It comes as no surprise that Nykthos, Shrine to Nyx can become incredibly powerful in mono-colored decks. Imagine that-–devotion is best when fewer colors are played. While the revelation made me significant coin thanks to the spike in price on the graph above, it also had a negative impact on shockland values. In mono-colored decks, shocklands are strictly worse than their basic land counterparts.

Now there’s a glut of shocklands due to the quantities printed and opened in Return to Ravnica block and the demand just dropped significantly. Hence we have the price drop negatively impacting our portfolios.

So What’s The Good News?

For now there isn’t a whole lot. With Theros becoming a major success, shocklands will at least be opened in much fewer quantities. The supply should largely be at a peak. The problem lies primarily in the lack of demand. But this may yet be overcome.

First, we have the upcoming Born of the Gods release. Rumors I’m hearing entail some multi-colored gods. This could mean multi-colored devotion and this could bode well for shocklands. If decks of three or more colors become popular again the demand for shocklands should increase.

If this fails, then we will simply have to wait for Modern PTQ season. Wizards postponed the season once, but there is virtually zero possibility they do so again. When Modern season does inevitably roll around demand will finally get an increase. The Modern metagame is heavily populated with multi-colored decks relying on fetch-shock land pairings for mana support--Affinity possibly being the exception in the list of Tier 1 decks.

“Hurry up and wait.” I hate this saying. But it’s fitting here don’t you think?

We are all sitting on this major investment which isn’t panning out in the short term. So the options are either sell now for a loss (breaking even at best) or sit around and wait for these to finally get some love. I doubt they will drop in price when they rotate out of Standard–-they are way too popular in Modern and even EDH. It’s likely these do what the Zendikar fetchlands did.

The Zendikar fetchlands declined little if at all when they left Standard. Then they increased in price steadily as Modern gained traction. If we expect Modern to remain strongly supported by Wizards (and hopefully we get a third-party SCG Open-like circuit of Modern tournaments in the future as well) then the same trend can be expected. Thus there is still plenty of upside on shocklands.

But I would be remiss if I neglected to mention the risk: reprints. Wizards wants Modern to be an affordable Eternal format. They have already demonstrated their dedication to this goal by giving us Modern Masters and reprinting shocklands, Mutavault and Thoughtseize in Standard. With a few exceptions, these reprints have reduced prices effectively. And it's only a matter of time before Tarmogoyf and Dark Confidant follow the same trend. Consider yourself warned.

Shocklands could easily be reprinted yet again, further damaging their price. Do I think this is likely? Not in the next couple years. I personally feel Wizards will target fetchlands when they next think about what lands to reprint. (Perhaps as a selling point for M15? Having fetches and shocks in Standard for three months wouldn’t be that terrible.) But the prospect of shockland reprints is not impossible.

Weighing all these risks and potential rewards, we need to make our own personal choice. I’m probably going to wait until Modern season to see what kind of price increase we get. If I can out these profitably–-even for a fraction of a percent--I may take advantage. If the opportunity doesn’t present itself, then I’m likely in it for the long haul. Two years from now these should see some recovery, much like filter lands and blue Worldwake manlands have seen.

I just hate sitting on such a large investment knowing the short-term returns won’t be there. I feel like my opportunity cost is quite high on these, but selling for a loss also feels wrong. It’s like owning McDonald’s stock and watching it do nothing while the rest of the market hits all-time highs. 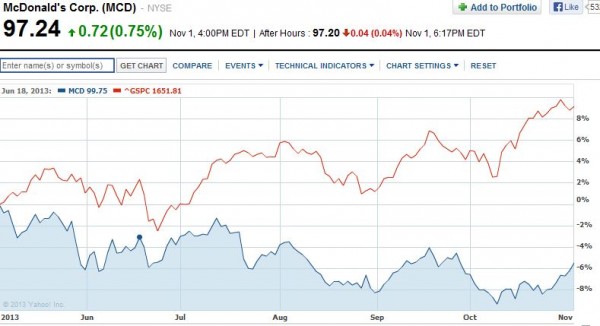 Alas this is the risk we take when investing. Sometimes even the blue chips like McDonald’s and shocklands falter. Rather than look at the price of entry, we need to focus on the price of exit. What are you> going to do with your shocklands?

22 thoughts on “Insider: A Shocking Turn of Events”