If you were to ask most Magic players which card they've played more than any other, they would likely take a minute to think. Going over years of decks, numerous pet cards and formats they were particularly enamored with, there is a lot of information to parse before answering this question. For me, the answer is Lightning Bolt, and it's not close.

It was early on in my days of casual play when I first saw a Lightning Bolt, and it was among the first cards that ever really resonated with me. Legions was the newest set when I first cracked a pack, and the Onslaught reprint of Shock was readily available to highlight Lightning Bolt's efficiency. Being both a removal spell and a win condition, it didn't take long to see how powerful Lightning Bolt was. Since then I've played it in every non-Vintage format, and if not for my inexperience in Vintage I'd probably have played it there, too.

Despite my attachment to Lightning Bolt, or perhaps because of it, I'm always loathe to sleeve up a Shock. It's like ordering a cheeseburger without bacon. Will I eat it? Yes. But the whole time I'll be thinking about how much better it could be.

That said, I've become quite enamored with the Standard burn deck as of late- Shocks and all. Brad Nelson wrote an article for SCG last week proclaiming how and why he's down on the deck, and when I found myself disagreeing with many of his points it occurred to me that his points were well worth responding to.

For starters, an article denouncing a deck titled "Do Something Powerful" inherently suggests that the deck itself is not powerful. Whether or not the deck is powerful is going to boil down to what exactly you highlight when examining the deck. Shock and Lightning Strike obviously compare poorly to Lightning Bolt, and Warleader's Helix is generally worse than Lightning Helix, but this isn't exactly the most powerful Standard format. Shock isn't so embarrassing when Pack Rat or Elvish Mystic come out to play. Searing Blood is plainly insane in this circumstance. And what about Boros Charm? I mean, Flame Rift is played in Legacy, and that is one point where the comparison is absolutely favorable. Boros Charm and Skullcrack are Modern staples, and Mutavault is a mutli-format all-star. How far off could we really be?

The biggest point that I feel Brad misses on it highlighting Burn as a Satyr Firedancer deck. While I'll admit that Firedancer is what first drew me to the deck, it never felt essential. It was good when you had a good mix of spells and Firedancer against creature decks, but a substantial portion of the meta consisted of Black Devotion and UWx Control decks, where the card was just terrible. I lived the dream of Firedancer into Searing Blood now and again, but far more often I played a crappy 1/1.

When Born of the Gods first released on MTGO, I missed the memo. I found out that the set was legal on MTGO when my round one opponent in a Daily cast Searing Blood against me. At the time, I was playing this list to get a feel for the deck: 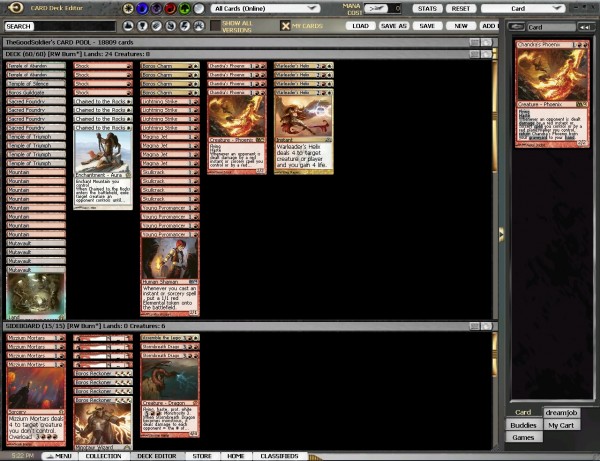 Despite not playing any cards from the new set, I 3-1'd the Daily with two wins over the mirror. Their Searing Bloods were good against me, but this was another matchup where Firecdancer was just embarrassing. I was basically playing Chained to the Rocks in the Firedancer slot as a hedge against Master of Waves and Desecration Demon. Later I would find out that Blue Devotion was a very favorable matchup without Chained to the Rocks and make the call that a hedge against Desecration Demon wasn't worth the dead slot against Control decks.

Anyway, the point was that this isn't a Firedancer deck. I was getting the best results by just taking everything to the dome with occasional interaction, which Searing Blood made much better but Firedancer did little for.

Brad's points about attacking from a different angle and going over the top are complete misses for me. Burn spells are a completely unique angle in the format, and on your best draws your opponents just get to sit there and die. Going over the top isn't even a relevant turn of phrase for how this deck plays. Going over the top applies to matchups where both players are playing on the same axis and one does something bigger. With burn, you just dome them. You don't need to "go over the top" when nothing is getting in the way of your Boros Charms anyway.

Brad insists that Burn is going to struggle in a topdeck war. I'll admit that the deck struggles a lot when it draws too many non-Mutavault lands, but that's hardly a unique problem. Sometimes you have to just throw a bunch of burn spells at their head and hope to topdeck, but your deck is filthy with burn spells. As long as you can recognize when it's appropriate to use them to interact you actually end up hitting your outs quite often- Scrylands and Magma Jet certainly don't hurt on this front.

In terms of the sideboard, I won't argue with Brad. The control decks and Black Devotion board into Counterspells and Duress, which are a beating when some of your cards are only good for two damage. Even still, the deck has a healthy quantity of 3-4 damage spells in addition to Skullcrack to mitigate Gray Merchant of Asphodel and Sphinx's Revelation. These matchups are definitely tough, but every other matchup has felt favorable. GR Monsters, Blue Devotion, Wx creature decks... everything that isn't packing counters and discard have been relatively easy to defeat in my experience.

Those points in mind, this is my updated list:

The Annihilating Fire is something that I'm trying out strictly in terms of costing less mana than Warleader's Helix. Being able to two-spell with Helix is rare, which is the primary motivation here. The random relevance of RFGing creatures can matter against opposing Chandra's Phoenixes and Xathrid Necromancers, which is not for nothing, though perhaps this substitution won't pan out. The other option was Bolt of Keranos, but the Sorcery speed was too bad for a mere Scry 1 to make up for.

As I said, with this deck I feel favored against everything but Black Devotion and control decks, and the fights against those decks are always close. I think that burn ends up getting a bad rap because the games when you lose it can feel like you did nothing- after all, the only point of damage that matters is the last one, so Boros Charm just feels terrible when you lose, but I believe that if you try to be objective about how your matchups play out and learn how to play the deck inside and out then you'll see that the deck is well positioned against most decks while having close matchups against the rest.

Is it the best deck in the format? I don't think there's really a clear answer to that. I wouldn't recommend it to anybody who isn't a seasoned Burn player to just pick up and play, but the deck has a lot of power and I fully intend to PTQ with it.

Next week I'll be back with some Modern updates, but until then feel free to post any questions or concerns about Standard Burn.

4 thoughts on “In Defense of Burn”