There was talk for weeks, and honestly I didn't believe the hype. Deathrite Shaman is not too good for Modern.

As a modern Jund player for two years, I actually almost cut him from the deck recently. The decline in the popularity of U/W/x decks and the rise of Pod variants just meant that he was more often than not a dead draw. Remember those scenarios when your opponent would cast Blade Splicer and you'd feel kind of stupid having Liliana on your turn three? Those two things were coming up a lot, as of late. Both Liliana and Deathrite are going to continue to be All-Stars, of this I have no doubt - but the meta game for Modern was becoming much more Supreme Verdict/Damnation friendly than people would like to admit. Now, with the rise of Fish - I see this becoming even more the case.

What have the Bannings/Unbannings done? What effect has been shown?

The game is changing. Speculation as a whole is no longer a game of just creating demand. Supply is the name of the game right now. In fact, it's punishing those players that choose to play older formats. Stores are reacting quicker, canceling orders, and waiting for the right time to dump cards. Players are still hot on the heels of the hot trend, emulating the top players, wanting to play the top deck. Yet, they are still reluctant to buy in on changes without results, and slow to pull the trigger. This will change. Especially in older, wide open formats. When a price spike happens, it has become a "who swerves first" maneuver. That is the next evolution. If you can't see that writing on the wall, I will point it out now.

At some point, players will recognize the price spikes as speculation manipulations and will NOT buy in. They will wait for TANGIBLE results and wait for the price to fall. Either that or they will start planning much further ahead. Hoarding in fear of a sudden market change for a card they feel is underpriced.

It's happened enough times now that price buy outs have become just stores shuffling money between each other. The hype dies down, and the card returns to Earth from the Stratosphere. Let's take a look at some examples: 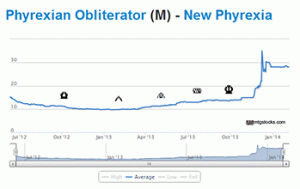 Phyrexian Obliterator has done just that. The original hype machine for Modern, it's proven that it could possibly be a contender. For now, Modern season is not actually in full swing, and there has not been anything to back up the hype.  The price has stabilized and will either trend down or up, dependent on if the demand actually surfaces. 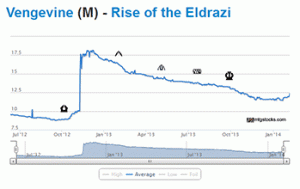 I cannot tell you how frustrating Splinter Twin has been for me. Every time I feel like I should reevaluate my card analyzing skills, I keep coming back to Splinter Twin and Vengevine. Both cards experienced high demand during their time in Standard, and after rotation have experienced sudden spikes in pricing. Vengevine has been the more fringe of the two, and while Splinter Twin was putting up numbers the price simply would not budge. Each time I would set a number of copies aside, only to feel like in the end I was twiddling my thumbs. As soon as I put them back into inventory, it always felt like the wrong time. This just reaffirms that belief in your skills, having your exit strategy, and being prepared with your worse case scenario being acceptable is the best plan. 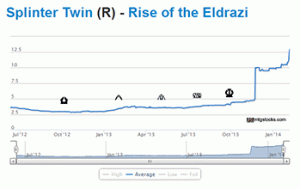 In this case, this happens when Demand is there but Supply outstrips it. Results are there, too, yet Supply is easily and readily available. Or the PERCEPTION of Supply. Fast forward to today, Perception and Supply have caught up. Never underestimate the power these two items have on what determines a cards value. Sudden popularity is not the only thing that will play a part if a card is readily available. The mind of Magic players is slowly starting to come to grasps with the sudden change of cards as a "Get Rich Quick" scheme. Thus, becoming more hesitant to let go of cards. Couple this with the unrelenting buying of Star City, and availability can dry up in a moment's notice.

The Belle of the Ball: 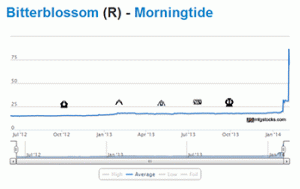 I've been asked a lot about Bitterblossom this last week. Bitterblossom coming out as an unbanned card has not been hugely surprising. As I mentioned last week, I'm not disappointed in missing this train. I truly feel like this is a misfire - as a reprint feels very much like it is in the works. Combine this with one alternative being the event deck possibly being B/W Tokens, and I forsee Bitterblossom's price being extremely volatile in the upcoming months. The real kicker is, we won't know where the coin will land until the middle of June, once the Pro-Tour Huey Qualifiers really kick off. Will a Bitterblossom based strategy even cut it enough to maintain $70-$80? 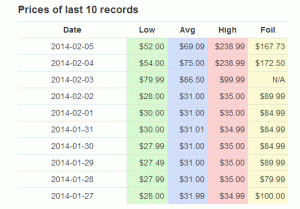 The real money to be made in this is all the support cards of Bitterblossom. Even those, though, have experienced a quick knee jerk retraction in price spike. Falling back once stores realize that the surge of buyers will only stand a 400% increase and not 500%. The lesson to be learned here is to start paying more attention to the support cards being affected by the banning. In the past, a ban or unban simply meant a card would reflect the change. Now, you're seeing a ripple effect across the whole format. The formats "movers and shakers" are more intricately bound together as speculators have truly risen to take the reigns of any given buying format. Star City's mass buying machine has really changed the way this world is lived in. Adapt or die.

The furthest reaching effects on how this will eventually effect pricing out of player groups is still unclear to me. Wizards, though, is proactively experimenting with the true impact reprints have. I believe they originally got involved to help create more aspects of the game for people to love. As the prices increased, the concern of a price barrier became more and more the narrative.  Now that we have been desensitized to the reprint aspect thanks to the rebranding of the Core Sets, I feel we will see more and more special sets that will stand outside of Standard. This would more access and a lower barrier to entry to older formats.

The real question to understand is how will Magic continue? A twenty year old card game with multiple formats spanning the course of multiple decades interspersed with availability concerns that sometimes forgets this is still a game to be played. How do you continue to make money not the end all be all?

I think that's the real effect that we see with these changes.

2 thoughts on “Insider: The Butterfly Effect”