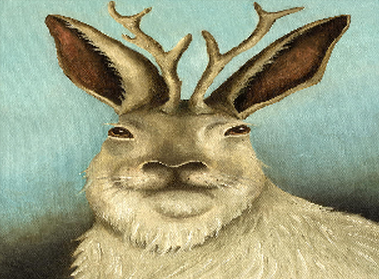 Design Goals:  This strange Mystic Snake wanna-be is another of the "Guild Hill Giant" cycle first discussed in the post about Porcelain Lurker.  The initial idea was a sort of Mana Leak variety - counter the spell unless its controller pays X mana. But,  as discussed in the Goblin Shot-Shooter preview, Drink X abilities that aren't limited by in-game factors should be considered, basically, unlimited.  Thus, we decided to turn this into a hard counter.

Each card in this cycle is a 3/3 for 4 with an ETB ability and at least 1 other (usually core) ability. We had to consider whether it deserved anything else beyond Flash, and decided against it.   We considered Hexproof ( which fits the 'hypnotic' theme a bit ) or Trample ( because it's a rabbit with horns..? ) but ultimately thought that a 3/3 and a Cancel for 4 mana was solid enough.

But, you make the call.  That's why we put a poll at the end of each Booze Cube preview card - if enough people think this is under-powered, we'll probably revise it.  So, what do you think?

Inspiration: A stupid pun and alliteration.  Hops are both something rabbits do and an essential ingredient in brewing beer.  To some degree, Mystic Snake.  We'd be lying if we told you we didn't start with the art and work backwards.