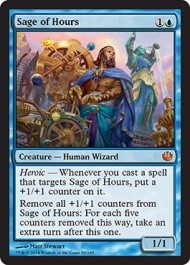 Seriously, we all love to do it. And thanks to a sweet new spoiler from Journey into Nyx, now we can do it  in Standard.

All the talk has been about the combos. Basically, using stuff like Vorel or the new Ajani or Sunbond or... anything, really. There's a mess of different combos with this guy. And that's just Standard.

So it's safe to say people have been gushing about this card. It's also safe to say none of these combos will be good. Thankfully, most people do seem to have realized this already, and they're fully aware that all the "fun" combos with this are just that and nothing more.

So we have a "bad" card that is nevertheless creating excitement. I'd say that's the hallmark of a well-designed card. Like with the new Ajani, Wizards seems to be focusing on flavor and that "wow" factor moreso than grindy tournament cards. After all, 5-mana Planeswalkers that don't protect themselves and 2-mana 1/1s aren't exactly setting the tournament circuit on fire, but they're a hell of a lot of fun to talk about. Who doesn't want to pull off their janky Standard combo just once or walk away from FNM having gained 100 life?

At least, that's my opinion on these cards. In Commander, Sage of Hours is legitimately insane, because the combos to set it up take less work, and with stuff like Doubling Season it all becomes much more feasible. I'm sure this will find its way into many a Commander deck, and I know I'll be looking for an opportunity to sling it at a Friday Night Magic.

What about you? Looking forward to playing with Sage of Hours?