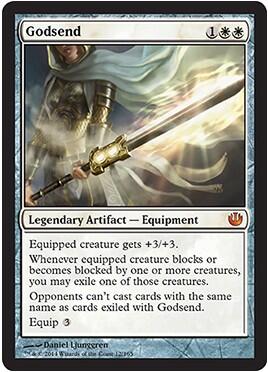 Is this really a godsend to Standard or just another big, useless equipment?

It's certainly a cool effect. Elspeth's Sword is flashy, that's for sure. The fact you can get rid of any creature and then get additional value out of that is pretty cool. But is it good enough to see play?

Let's start with Standard. Basically it's never going to be in your opponents' interest to block your creature, so I think it's fair to say this is a Whispersilk Cloak with upside. So let's operate on the assumption it basically makes your creature Unblockable.

So we're paying three mana (which does help with Devotion), and then another three to Giant Growth a creature and make sure it gets in there every turn. That's certainly powerful, but I'm not sure it solves any of the problems the aggressive creature decks had. Namely, the fact that removal is so prevalent in Standard right now means there's a lot more killing of creatures than there is attacking and blocking.

That hurts the card. It's certainly no godsend to try and equip this to a creature just to have it pay the Ultimate Price or become blighted with bile. I can see this being a cool one or maybe two-of in the aggressive decks, but I don't think it really makes those decks any better in the current metagame than they already are.

It also could see some Legacy play, since it does present a pretty unique answer to True-Name Nemesis, since the ability doesn't have to target a creature to get rid of it. I think that's probably a fair use for the card, but it also likely limits it to one-of sideboard status for the Stoneforge Mystic decks. It could certainly excel there, so maybe foils are a better bet financially than regular copies.

With all of that in mind, I can't give this a ringing endorsement for Constructed play. It will find its way into decks in small numbers, but I don't think we're looking at a new pillar of the metagame here.

What do you think? Am I in the ballpark or totally off-base?

Let us know what you think!