Today’s article is part four in a series on getting more gaming for your dollar on Magic Online. Part 1 focused on basic tools, Part 2 focused on how to avoid draining your portfolio through drafting, and Part 3 showed how to play Magic Online like an insider—by targeting high-expected value (EV) events such as constructed Daily Events (DEs).

The barrier to playing constructed DEs is the upfront cost of a deck, so at the end of last article I showcased some budget yet competitive Standard and Modern decks you can start playing in Daily Events to build value. I also examined the pros and cons of investing in a deck for Standard vs Theros Block Constructed.

Today I will focus on Modern as a third option. Modern seems a counter-intuitive place to start when looking to play MTGO on a budget, but playing and investing in this format offers some of the best opportunities to go infinite.

Modern is probably the best format for MTGO investment, and buying into a deck gives you a foothold on one of the most profitable card pools. Other Insider articles and forum posts have focused on the benefits of investing in Modern.

In brief, one of the main attractions is Modern’s regular and predictable annual cycles, with peaks during a defined season and valleys in the offseason. The format also contains a number of low-supply cards that can spike under the right circumstances.

Getting acquainted with the Modern market will allow you to capitalize on flashback drafts, taking advantage of most MTGO players' short-term thinking and building long-term value in your collection.

Finally, Modern continues a steady climb in value, so even absent direct speculation the value of your deck should grow.

We will delve deeper into pure investment opportunities in the Modern market in future articles. But for the moment, let’s take a look at some of the pros and cons of investing in Modern from the perspective of a player on a budget (for comparison, check the pros and cons of Standard and Theros Block Constructed here.) 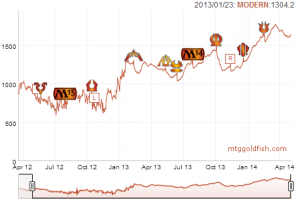 In years past, the Modern season online has corresponded closely with the season for Modern PTQs (in paper and online.) However, earlier this year Wizards announced the suspension of online PTQs until server stability issues are addressed. If online PTQs don’t return in time for paper PTQ season, online Modern prices should be muted, and we won’t see the peaks we’ve become accustomed to.

The good news is that Wizards scheduled several zero-ticket-entry “test” events this week to test “new tools and processes” they are putting in place for PTQ and MOCS events. I expect we’ll see MOCS and PTQs back soon, but even if they don’t return in time for Modern season, it’s clear Wizards wants to see Modern succeed.

I would not be surprised if they bring in some special Modern events, like Gold Queues or other special events, to bring some of the Modern buzz to Magic Online. I also expect we’ll see another Modern Masters flashback draft before or during Modern season, which will allow Wizards to monetize the growth of the format.

Today is a pretty good time to buy into Modern. Modern peaked on March 21, shortly after Pro Tour Journey in Nyx featured Modern as the constructed format, but has fallen 10% since then. The paper Modern PTQ season (feeding Pro Tour “Huey”) starts June 7. Once JOU release events wrap up we should see a steady climb by the Modern index through the summer.

Modern decks range widely, with competitive decks ranging from 100 to 1000 tix. The main drivers are the mana base (fetches being a major component) and a few chase cards. For the price of a playset of Tarmogoyf or Lily you could build most decks in the format.

Here are some deck options grouped by cost:

If Cost Is Not an Issue

A lot cheaper than Tarmo Twin, and with several potent variants.

Would be budget if not for the 4x Mox Opal, which comprise half the cost.

Storm rewards extensive play and skill--and costs half as much of many Tier 1 decks.

A nice target since the expensive cards (Cryptic Command, Scapeshift and Flooded Grove) are depressed.

The decks in this tier are especially attractive because they provide Tier-1.5 power at a fairly modest price. The ones in bold are good to target because many of the core cards are “on sale” right now due to flashbacks. If I were new to Modern I'd probably start with one of the decks in this tier.

Dirt cheap except fetches, Leylines, and Daybreak Coronet (which is on sale because of flashbacks).

Key pieces like Living End and Fulminator Mage are "on sale" right now because of flashbacks.

This is a powerful deck and includes many cards that will rise during Modern season.

These are rogue strategies or sub-optimum builds that are not top tier but can still be competitive. Mono-Blue is probably most likely to put up results from this tier.

One of the cheapest decks to put up consistent numbers in DEs.

Finding a Deck for You

As you can see, there are lots of options, and price need not keep you from playing Modern. The most important thing, of course, is to find a deck that you enjoy playing. Life is too short to play decks you don't like. If you have any experience with these budget decks--or have some good options that I missed--please let us know in the comments.

Keep your seatbelt buckled. Next week we take on Legacy--and the impact of Vintage Masters.