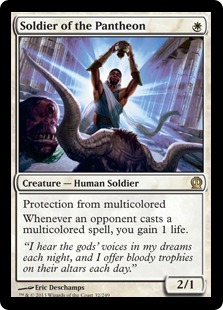 Jason's Alticle is gone and with that bathwater we lost a somewhat valuable baby in the form of the deck results writeup. As much as it felt like a chore at the time, it kept me abreast of what was going on in the game and to that end, I think I might occasionally reprise that bit of the Alticle if there is something significant. There were some significant happenings yesterday.

Nobody played in the greatest Magic event city on the planet. Seriously, no joke, Indianapolis is the absolute best city for a tournament. I'd play there every weekend if I could.

Maybe they were all in Providence. Providence had an SCG Open and the Top 8 was kind of saucy.

Mono Red is back and it looks like the mono red we have seen before. The deck is about to lose a significant portion of its gas, but what is important is that Eidolon of the Great Revel has found a spot in a deck with a low mana curve. I was not a fan of playing "suicide red" but Zac Hill pointed on on Brainstorm Brewery that you only need it to do 4 damage to them to outperform Ash Zealot, a card people were playing despite there being no flashback in the current Type 2. Eidolon is the same devotion and it can shock them as easily as it shocks you. Get there! This card could increase in value if it gets more adoption going forward. I'd watch it. Unfortunately, we'll need replacements for Boros Reckoner and Burning-Tree Emissary if mono red devotion is to remain as robust. Khans of Tarkir (seriously, I'm never going to not hate that name) may give us something even if it's gold.

Mono blue devotion is back and has some new tech; Galerider Sliver to give your Mutavault flying. Some expected Hypnotic Siren in that spot, but it may not be as good as just jumping your 2/2 "slivers" and getting there in the air.

Mono black actually looks new. It seems to answer the question "Which is going to get there going forward, Herald of Torment or Master of the Feast?" I was betting on Herald myself, and it's good to see John McCarthy agree. Gnarled Scarhide the minotaur Gotham City needed but not the one it deserved has eschewed his role as the curve-bottomer in a tribal deck and is smashing face alongside Rakdos Cackler, a card for whose job it's clearly gunning. This deck likely survives rotation, but with Khans potentially being a wedge set, who knows how much we'll care?

As an aside, if Khans is a wedge set and devotion doesn't matter, snag cheap copies of Nykthos, Shrine to Nyx. The card is a Cabal Coffers waiting to happen, although there are probably more copies of Nykthos than coffers out there if the print run numbers I saw extrapolated from Torment are to be believed, which they likely aren't.

Jim Davis is good at Magic and Planar Cleansing is a good card that we're going to miss if it rotates even though most people didn't play it.

Jund Monsters was a stock list and is a better deck than G/R Monsters.

The G/W Aggro list is very similar to a list Rob Daughtery ran back at the PT in Dublin, only it's much better now. Deicide, Banishing Light and Temple of Plenty were all the deck needed to grow the beard. Do I think this is better than the Scion of Vhitu Ghazi deck Ryan Archer is playing (and no one else)? No, not really. But this deck is solid and it is completely obliterated by rotation, so there's that. If Khans is a wedge set, Soldier of the Pantheon likely jumps as quickly as Nykthos tanks, so be prepared. I prepared by buying Soldiers 6 months ago and watching them do approximately dick for me.

That's what happened in Providence. If we see anything significant, I'll be back next week with more analysis.