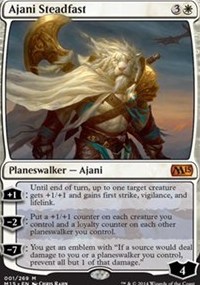 After Journey into Nyx introduced the game's first green-white planeswalker, Ajani, Mentor of Heroes, nobody expected yet another new version of Ajani in the following core set. But the spoiler is official. Meet Ajani Steadfast: 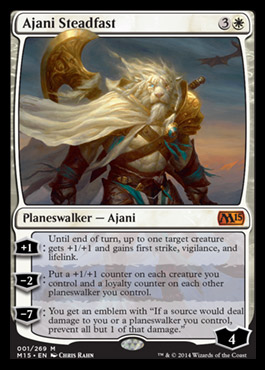 Astute Vorthoses will note that Ajani Steadfast is sporting the robe previously rocked by the now-deceased Elspeth, Sun's Champion. Together with the continuation of the Garruk's curse storyline from Innistrad block, this core set is more focused on the game's storyline than any of its predecessors. If this continues moving forward, the trend of several new planeswalkers per core set may be something we see on a yearly basis. Maybe it's WOTC's way of fighting the traditional summer lull.

Until Magic 2014 rotates, we're looking at a Standard environment with three different Ajanis. Where Steadfast fits into the format remains to be seen, but he has some interesting utilities working for him. With only one colored mana symbol, Ajani 5.0 is easy to splash. Being able to tick up to five loyalty on turn four bodes well for his chances of surviving on the battlefield, but do his abilities make enough of an impact? Let's take a look at each one in depth.

First of all, it's important to note that this says "up to one," meaning you can still activate the ability on an empty board. This effect seems most powerful in a deck looking to get out one big threat. First strike means it's unlikely to die in combat, lifelink makes it difficult for your opponent to race, and vigilance means the creature can block and defend Ajani. He doesn't defend himself if you have no creatures, but if you do, he lets you continue beating down while holding something back to deter enemy forces.

In a weenie deck trying to go wide rather than tall, Ajani's first ability is less impactful. It can get one of your creatures through unscathed, but the life swing won't be as big and it does nothing to pump the rest of your team. Still, adding loyalty counters lets us better utilize Ajani's second ability...

Putting a +1/+1 counter on each of your creatures is a known quantity, and how good it is is wholly dependent on how many creatures you have on the battlefield. The weenie deck that doesn't get as much from Ajani's first ability is loving this second one. But that's not the part that sticks out, is it?

What we really want to know is how good the other clause is. This is the first time we've seen an effect that specifically adds loyalty counters to planeswalkers, and the possibilities are intriguing. In a Bant superfriends list, having an active Ajani Steadfast with an active Kiora, the Crashing Wave, means a free Explore every turn. Until rotation, we'll be able to use Jace, Architect of Thought's second ability twice without sending him to the graveyard. Pumping a bunch of tokens plus getting Elspeth, Sun's Champion, one turn closer to ultimate will speed things along for decks looking to end the game with the six-drop 'walker. Because Ajani 5.0 is splashable, he can be combined with almost any planeswalker in Standard, most of which would't mind some help reaching ultimate a turn or two sooner.

Ajani Steadfast's ultimate is far from an instant game winner, but it certainly makes losing the game a lot harder, at least against opponents who are attacking your life total. Decks focused on one big threat will have a hard time beating you if you manage to fire this ability off, but weenie decks still have a chance, as each individual creature counts as its own source. But if you were gaining a bunch of life from Ajani's first ability, chances are that even a large army is going to take a few turns to finish the job.

Protecting planeswalkers' loyalty seems less important here. If you were able to fire off Ajani's ultimate, chances are your planeswalkers are well-protected against opposing creatures. This does make burn spells less potent against 'walkers, though, which is not unimportant. But remember, Hero's Downfall doesn't care about this ability at all.

Ajani Steadfast could be a cog in the machine of a few different decks, but the card's power level is completely dependent on the creatures and planeswalkers you already have on the board. Cards that encourage you to overextend are tough to break, though we can't overlook the fact that Ajani has some unique abilities not replicated by any other card.

With preorders bottoming out at around $18, Ajani 5.0 is available for lower than the initial price of many new planeswalkers, but unless it's a key part of a metagame-defining deck, the card will likely dip below $10 before long. If you believe in its ability to dominate Standard, feel free to get your copies, but I'm holding off on this one.

What do you think of the new Ajani? Let us know in the comments below!