It's been a while since I talked about the deck, but I'm still on Soulflayer in Standard. During Pro Tour Dragons of Tarkir, Jamie Parke was featured on camera playing a Soulflayer brew, which got me pretty excited. The more I saw of his deck, though, the less excited I was. I feel like the Pantheon got caught up doing things that are powerful in other decks but incoherent with the Soulflayer shell as well as playing cards that are only okay in the Soulflayer shell. 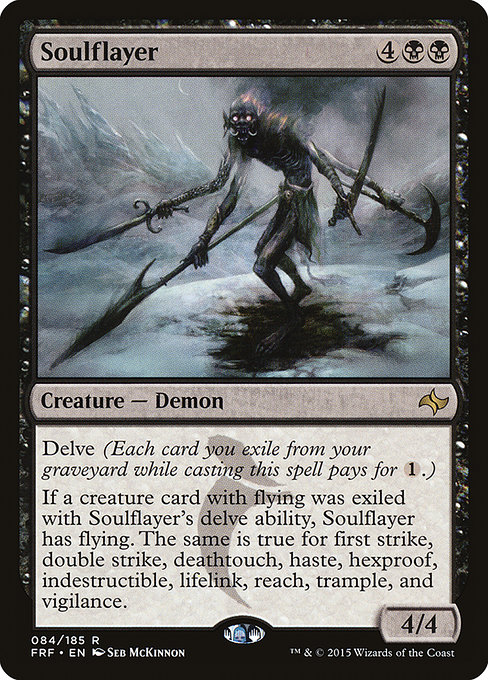 Zvi did a write-up on the Pantheon's build on Channel Fireball, which you can find here.

3 Murderous Cut
4 Commune with the Gods

Compare this to the list that I won a PPTQ with:

My experience with the deck has led me to a manabase consisting of tri-lands and untapped lands that provides all the colors of the rainbow consistently, untapped on crucial turns. The Pantheon build has a ton of Temples, which are fine if you're not planning on casting Chromanticore, but are much less good if producing a ton of different colors quickly is your end goal. They definitely have the four Mana Confluence right, but I like my manabase more in every other regard.

The card that looks kind of crappy in my list but I would never cut is Tormenting Voice. You have an extremely good late game and you just need to be doing something before turn three. You have to live long enough to get to your endgame, and Tormenting Voice does more work than you'd think, including mising the occasional game where you mill a Chromanticore or hexproof creature with a different enabler, then discard the other and a Soulflayer on turn four. Hexproof Chromanticores on turn 3/4 are your primary source of wins, so maximizing this potential is just smart.

The other thing my deck does better is that its Plan B and Plan A are much more seamless. Milling yourself and finding a Deathmist Raptor is neat. It's powerful incremental value, but it's nothing like the deck's primary gameplan of a giant fatty, and you'll often find yourself investing resources into a battle that you don't care about fighting when your plans don't mesh well.

Sagu Mauler is, in many ways, the glue of my build. 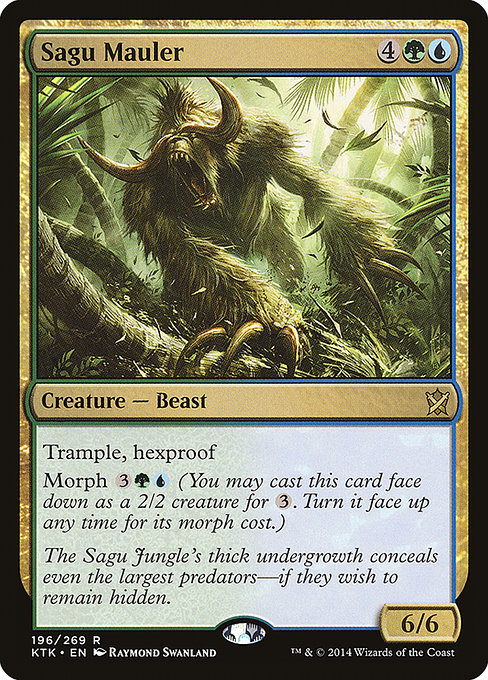 It's great to mill and it's the best thing to bestow a Chromanticore onto. It can also show up as a morph in a pinch, which is huge upside over Silumgar. Not to mention that playing four is relatively low cost, especially by comparison.

Pharika is very, very close to a do-nothing on its own and Sidisi is too slow for this type of strategy without having the proper support to slowly take over a game that is available in a Whip of Erebos deck. Silumgar is only okay here, Den Protector is better suited to a deck more interested in attrition, and I find the lack of Tasigur disturbing.

It's true that a new set has launched since I've updated my list, and it's also true that the set in question has proven to be very impactful in Standard. That said, I don't believeDragon's of Tarkir has produced anything that the Soulflayer deck wants, nor did it make any of the Soulflayer deck's matchups worse.

Deathmist Raptor is interesting, but it ultimately takes up too much space and adds too little value. I tried out having it as a sideboard card against control and Abzan, and it was okay but bringing it in meant cutting too many enablers and/or "combo" pieces, which ended up being too high of a cost.

If you cut enablers then Deathmist Raptor looks more like Trained Armodon, and if you cut your payoff spells, you're left just being a Deathmist Raptor deck, which is ultimately pretty low power without things like Whisperwood Elemental. 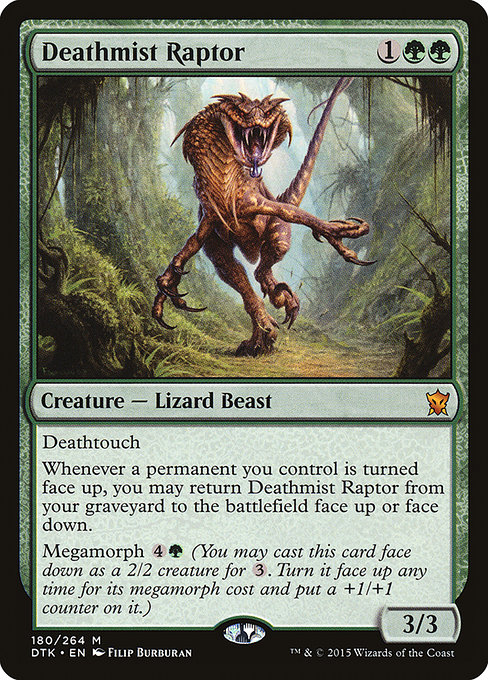 I do like having access to some number of Ultimate Price on the sideboard, but the relevant addition I've made to the deck since last I wrote about it actually came from the past. Or... an alternate version of the present? Khans. It came from Khans. 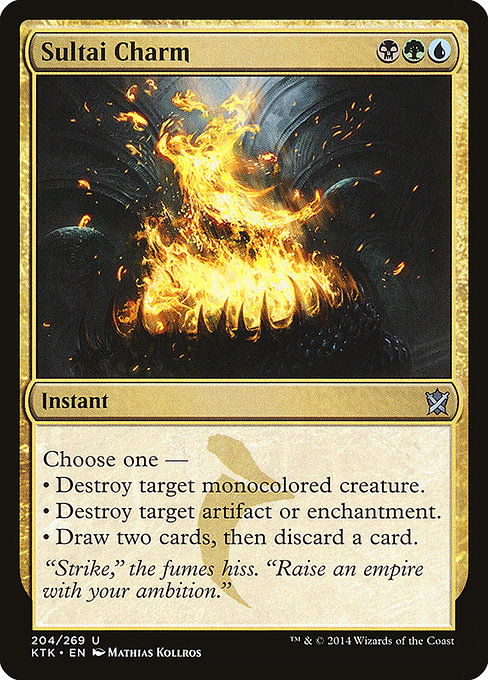 Sultai Charm had shown up in other people's builds of the deck before, but I never liked it with the mana in my list, nor did I see reason to play it as an enabler when it paled in comparison to Scout the Borders. Then people started playing green devotion and I both wanted more answers to kill Whisperwood Elemental and ways to handle the myriad enchantments that were showing up in Standard.

In order to reliably cast Sultai Charm, I had to change the manabase slightly. Seeing as I was happy with where the manabase was, the change I saw as being most true to the original build while supporting Sultai Charm was to remove two Bloodstained Mires for an Island and a Polluted Delta.

The change makes the list look more than ever like it has terrible mana, buthaving access to Island and more diversified fetches has resulted in being able to cast more turn 4/5 Chromanticores.

The financials of the deck haven't changed at all. These are the cards I've held onto from Theros block, and this deck keeps winning me more and more fractions of tickets on MTGO. I can't imagine playing anything else for the RPTQ, and I feel very good about the deck's position in the metagame.

I believe my list functions better than the Pantheon's list, and it also enables you to let Deathmist Raptor's price drop a bit before you have to pick them up. It's still a card that is high on my list for great cards post-rotation, but there's plenty of time before that happens.

If you're into Chromanticore, then I wish you good luck in your ventures and hope that your Communes and Wayfiners are good to you.

If you're not on board, I strongly recommend trying this deck--both because it's complete gas to play and because it's actually very good.

2 thoughts on “Insider: Staying the Course with Standard Soulmanticore”