The era of the core set is ending with fireworks. Our first volley was the flip planeswalkers. Wizards is bringing us on a journey. This journey starts before our beloved characters were epic travelers of the multiverse.

These game changers, in the vein of Garruk Relentless, are the epitome of flavor. Building the experience of becoming a planeswalker into five sweet cards is certainly my favorite part of the game since the introduction of this card type. Last week, I detailed my analysis of these new cards and I’m hopeful that some of them will see play in Standard. Witnessing their transformation during game play will help us dive into the game with a sense of realism like we’ve never experienced before.

In the second burst of explosions Wizards is bringing us the flavor of some old-school Magic cards updated with new tweaks and balanced for our current formats. First up in this group is Dark Petition. Although it has to compete with Sidisi, Undead Vizier, this Diabolic Tutor with an attached Dark Ritual provides an interesting tweak to our expectations from a tutor. Take a look at the card for yourself. 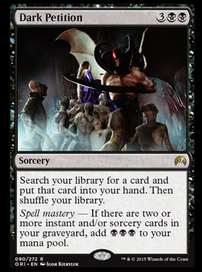 Dark Petition may see some play, but I think it seems too slow. I like Sidisi because she can help you stabilize a board. Dark Petition can arguably do the same thing though if you are tutoring for a card like Hero's Downfall.

It’s intriguing that we will have multiple tutors available for us to brew with at the same time though. I’m not sure of the last time that happened but with both cards costing five mana, I think we’re safe this time from a broken combo deck. 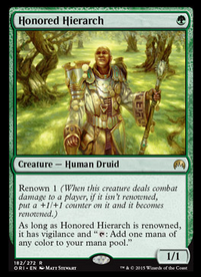 Honored Hierarch is a pseudo-Birds of Paradise/Steward of Valeron hybrid card. Many players are entranced by the allure of playing this creature turn one into an empty board from your opponent.

Despite presales for this card starting around $7, I’ll happily play the skeptic on this one. There will be times when your dream scenario happens and you get to attack and give your dude some renown, but will that happen often enough to make this creature a staple? That is the question on everyone’s mind and I’m still the skeptic.

Regardless of how often you can sequence ideally, there will be many more times when you draw this creature after turn one. Unlike any of its predecessors, Honored Hierarch will only be a one mana 1/1 when he’s played later in the game. This is not the type of card I’m interested in playing because it’s too situational. 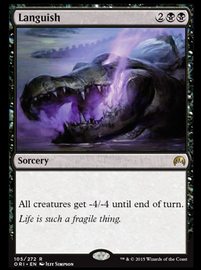 Sometimes even when you know what a word means, it’s hard to formalize a definition in your mind, so let me spell it out for all of us. Languish means to lose or lack vitality; grow weak or feeble; to suffer from being forced to remain in an unpleasant place or situation. These definitions seem like perfect fit sleeves on a foil Snapcaster Mage because with this shout-out to old school Wrath of God effects, I am heading over to the corner to hide.

The card Languish fills me with terror at its existence. I’m thinking about starting a petition with the other aggro players out there to send to Wizards about their oppressive printing of cards to keep us down.

Kidding aside, this card is as close to Damnation as we are likely to get, but just like Crux of Fate, you can build your deck with this sweeper in mind so that your creatures will live through the spell. The saving grace is that because there are so many strong creatures with five toughness, I’m not sure that this spell is playable maindeck. It certainly isn’t going to be viable to play four maindeck like you would with a normal wrath effect, but maybe having a couple of them would work.

Either way, this is a card whose existence will shape the very nature of the format. 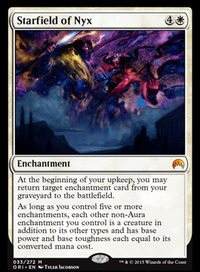 Even though I’m a bit salty that this card is being printed as Theros block is nearing rotation, the callback to old school cards is enough for me to reorient myself with a positive attitude. We don’t often see spells like this printed these days. Wizards’ focus has been on pushing the creature envelope nearly to the breaking point.

Think about a creature that sees virtually no play but is extremely powerful. The one in my mind is Savage Knuckleblade. You may have thought of a completely different card because there are many that fit this mold. Knucks is so powerful that if it were printed in the past, it may have been one of the defining cards of that era. Now, it sits on the sidelines most of the time which is crazy for how potent and all-purpose that threat is.

Despite focusing on making creatures interesting and epic, we occasionally get a gem like Starfield of Nyx. Cards like this were created for the brewers to get their gears turning. Even at first glance, I was immediately drawn to this card for how intriguing it is. Although I never got to play with the cards personally, I always thought that the Opalescence-Replenish deck looked like a blast to play. With this new card we have the two of those cards all in one card!

Another interesting feature of this enchantment is that we have access to creatures that are also enchantments. That was not the case back when this strategy was first printed, but it adds an interesting dimension to the possibilities in Standard.

Decks like G/B Constellation have seen some play at various times while Theros block has been legal. It’s possible that the Starfield is the next evolution of that deck, but I think what’s more likely is that a completely new deck will emerge that uses this sweet new card. 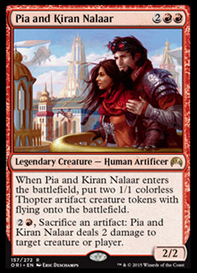 Of the cards spoiled thus far, my favorite by a mile is Chandra’s parents. Pia and Kiran Nalaar is the type of card that immediately gets my attention. I’ve played Siege-Gang Commander at every opportunity and these new parental figures are the closest thing we’ve seen to this effect in a long time.

When I think of this card, I align it with many different cards that have previously been printed. Yes it resembles Siege-Gang Commander, but if it were just Beetleback Chief, I would probably still be interested in playing the card.

Also, I can’t help but think back to M15 Limited. When I drafted M15, one of the archetypes that I tried to draft many times was U/R Artifacts. Take a look at the type of cards this strategy played.

Possible Cards for the Deck

I’m not sure if you ever tried to draft this deck, but often it didn’t work out very well. You had to balance drafting artifacts to enable these interesting cards, but most of them weren’t worth the eventual payoff. Nevertheless, I was enamored at the prospect of drafting this harmonious contraption.

The reason I bring up M15 Limited is because not only have players tried to draft these interactions, but I’ve seen sincere efforts to build these synergies into constructed decks. Pia and Kiran seem like an essential part of the puzzle. Not only do they offer a reward for playing other artifacts, but they also provide artifacts to enable the strategy.

There are plenty of applications for this token maker. We could try to develop a deck similar to U/R Artifacts or we could insert this card into any number of preexisting decks with access to red mana. Pia and Kiran could help us enlist a horde of tokens to overwhelm our opponents, combo with Purphoros, God of the Forge, or just present a solid midrange threat similar to the way that Jund used Siege-Gang Commander. My head is swirling with various applications for this new card and I'm excited to cast it in Standard. 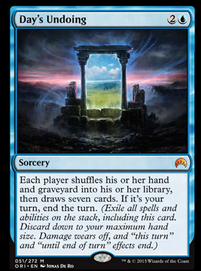 Lastly, the inspiration for this card, Timetwister! Cough, cough, excuse me, I mean Day's Undoing. The comparison is obvious but still important. Timetwister is a member of the Power 9 and for good reason. This card provides a potent effect on the game and we have not seen a card this close to one of the Power 9 ever been printed. Admittedly, Timetwister is the least powerful of the Power 9, but it doesn't take much for a card to be less powerful than Black Lotus, the Moxes, and Ancestral Recall.

There have been plenty of draw-sevens over the years, but most of them are expensive cards like Reforge the Soul or Temporal Cascade. Once we were even given a four-cost spell with this effect in Colfenor's Plans. Despite their mana intensity, players have still tried to find applications for these cards because they provide a potent effect on the game that can be set up to benefit one player more than the other.

This combo enabler is so great because you can take advantage of it in the early game, whereas the other printings of this effect are too expensive to fully utilize. Standard is likely a fine place for this card because there aren't many ways to abuse it. It may see play in Standard and be a solid card, but just like Treasure Cruise, I doubt it will be a problem.

When I start thinking about possible applications in Modern, most of my conclusions end up resulting in preemptive bannings because the card is too good for the format to handle.

Step one for my brain, couldn't that card be sweet in Scapeshift and revitalize that deck the way Dig Through Time did? You could cast it in the mid-game and draw Remand, Cryptic Command, or Lightning Bolt to interact with your opponent on their turn, then untap and hopefully combo them.

Step two was to combine it with Burn the same way Treasure Cruise did. Cast all your burn spells then get a new hand and do it all over again.

Those two situations are just the tip of the iceberg. The bulk of the applications are below the surface, but luckily players like Craig Wescoe are happily sharing their thoughts with us.

Yesterday Craig posted this on Twitter. I believe he did so not to actually ask the question of whether or not this is a keepable hand but rather to show us how broken this new card is. Take a look at Chaz's write up of the situation for a deeper analysis of this tweet.

There's a long list of possibilities for this card, but one thing's for sure, this is no Time Reversal. I've almost pulled the trigger on preorders for this card. Even at $23 that seems low if this card is half as broken as it seems.

How long will it last in Modern? Surely Wizards won't let Modern devolve into quick combo decks. They have proven in the past that their goal is a slower format, yet they continue to print cards that quickly and thoroughly wrap the rest of the format around themselves. The rest of the cards seem reasonably priced but this mythic rare could easily double in value if it sees as much play as Treasure Cruise did.

What are your thoughts about Day's Undoing or any other card I've talked about today? Will Day's Undoing be the undoing of Modern? Will these other cards impact Standard and shake things up? Let me know in the comments below.