Below are the total set prices for all redeemable sets on MTGO. All prices are current as of August 31st, 2015. The TCG Low and TCG Mid prices are the sum of each set’s individual card prices on TCG Player, either the low price or the mid-price respectively. 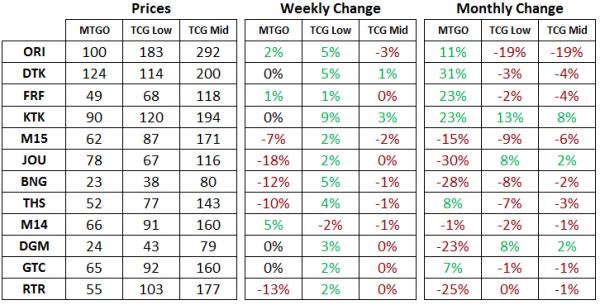 RTR resumed its descent this week and it's now 10 tix cheaper than GTC, which itself saw no change. A U/W Control deck featuring two copies of Sphinx's Revelation popped up and took down the SCG Modern IQ this past weekend. Although Grixis colours have taken a strong hold on both the Modern and Legacy metagames with the delve cards from Tarkir block, it would be incorrect to indefinitely write off blue-white control strategies as unviable.

Keep an eye on the mythic instant from RTR for a price floor, although there is nothing to suggest that the downtrend on Sphinx's Revelation is over. It has fallen by more than 50% since RTR went offline for redemption and it currently sits at 9 tix. It's too early to call a bottom but when it does find a floor accumulating copies will be a good move for speculators.

The four soon-to-be rotating sets all saw a steep drop this week on MTGO as the BFZ spoilers from PAX Prime over the weekend have reminded players that Fall rotation is rapidly approaching and that some of their current cards are about to be relegated to Constructed obscurity.

The Theros block temples are going to go from Constructed staples in Standard to just fringe-playable in Modern. While Thoughtseize will live on, its pal from THS Hero's Downfall is on its last leg as a must-own card. Elsewhere, the 10+ tix price tag that Standard staple Elspeth, Sun's Champion currently carries is going to start a decline to a much lower level when October rolls around.

On a more set specific front, the paper prices for a set of JOU are flat to positive so it's possible that the third set of Theros block has put in a price bottom. This is a bullish indicator for MTGO speculators, and a signal to watch out for on the other rotating sets as well.

A bottom in paper typically precedes small but steady digital price gains down the road through the redemption mechanism. Although the incremental gains are small, the trend can extend for months and it's also predictable. Speculating on the bottom for redeemable sets is a low-risk endeavor that yields steady gains over time.

With that in mind, a bottom in paper for JOU does not signal a good speculative opportunity for MTGO speculators. The set price on MTGO plus the redemption fee still greatly exceeds the TCG Low set price for JOU. If the paper price remains stable, the MTGO price for JOU would have to drop into the 40-45 tix range before strong interest from redeemers would be triggered.

At the moment, with JOU at 78 tix, redeemers have zero financial incentive to convert digital sets in paper ones. Therefore only Modern- and Legacy-playable cards should be under consideration for speculation from JOU and junk mythic rares should be strictly avoided.

The gap between the price of an online set of ORI and a paper set remains wide, even with the opening of redemption this past week. Once redemption orders start to be delivered a steady decline of paper prices will begin. For the moment though, ORI looks to have exceptional value to redeemers and they will be working hard to convert digital sets to cardboard over the coming weeks. This means that prices will be flat to positive over the next four weeks, with some value flowing to the mythic rares.

Although there will be some price weakness for ORI cards when BFZ is released, the value represented by ORI at current prices is in line with, if not exceeding, the value of past core sets on a similar time frame. For speculators on MTGO this means that ORI has excellent medium-term prospects for speculative gain and both players and speculators alike should be actively stocking up on cards from ORI.

Sam Black took a Mono-White Devotion deck into the Top 4 of the World Championships this past weekend. This deck featured Archangel of Tithes as a four-of. Event coverage triggered a brief price spike on MTGO. Although devotion strategies will be rotating with THS and Nykthos, Shrine to Nyx, this new angel is still under-utilized. The spoiling of the Gideon in BFZ will give white two formidable four-drops to build around in Fall Standard.

The other three decks in the Top 4 were all Abzan-based builds and between them they used 23 Theros block temples, mostly Temple of Malady and Temple of Silence. With the pending loss of its mana base, Abzan strategies are going to have to go back to the drawing board. With that in mind, it would be prudent to sell down positions in any cards that could fall out of favor when the Abzan colours lose their consistent mana.

For instance, take Anafenza, the Foremost. It's currently the most expensive card from KTK as it anchors aggressive Abzan strategies. It's possible that Anafenza will see higher prices after rotation, but from the spoiling of the five new dual lands from BFZ, it looks like wedges will be taking a back seat to the allied colours. With that kind of uncertainty looming, selling down a position in Anafenza, the Foremost would be prudent. Taking some gains off the table in advance of Standard rotation will also free up tix for the inevitable liquidity crunch of BFZ release events.

Among the BFZ spoilers is a twist on the rotating Hero's Downfall called Ruinous Path. This sorcery speed piece of removal will see less play than the THS instant. Although that's the easy conclusion to make, the addition by subtraction side of things gives us a different card to pay attention to. Utter End will now be the most flexible piece of spot removal in Standard and if there are other cards like Oblivion Sower in BFZ, then it could have some strong interactions.

As mentioned above, Sphinx's Revelation showed up as a two-of in the winning deck at the SCG Modern Premier IQ in Somerset. Celestial Colonnade is another staple of U/W strategies in Modern and it too appeared in this deck. Although the instant card draw and life gain spell from RTR has speculative potential, the WWK land is already up by 50% in the last month and so the timing is not right on this one. Look for some price weakness during BFZ release events as a possible entry point.

Jund took the 2nd and 3rd spots with the familiar triumvirate of Liliana of the Veil, Dark Confidant and Tarmogoyf, powered up by the one-mana discard spells Thoughtseize and Inquisition of Kozilek. Both sideboards featured Fulminator Mage as a four-of and Huntmaster of the Fells as a two-of. Modern prices have been trending up on MTGO in the past week and Fulminator Mage looks set to join in on the action. The DKA flip mythic is at an attractive entry point currently as it's down from around 8 tix to just under 5 tix in a month. Players should not hesitate to buy a playset of either of these sideboard cards at current prices.

Many Modern staples are currently showing signs of strength at the start of September. Spellskite, in both the MM2 and NPH versions, is up 4 tix in the past 10 days. After dipping down to the mid 80s, Liliana of the Veil is back on her way to 100 tix. This is not unusual activity for this time of year as players look for other constructed formats to try out instead of a lame duck Standard.

Although not currently a fantastic selling opportunity, selective trimming of a Modern portfolio is warranted in advance of BFZ release events. Any Modern cards that reach or near a previous price peak should be under consideration for selling over the next month.

On the topic of the BFZ Expeditions, this special set of 25 cards will feature full frame foil versions of the ten fetchlands, the ten shocklands, and the five new dual lands from BFZ. These are special inserts that will show up at around the rate of a foil mythic rare. This means one per case or one for every 216 boosters. For a singleton set of all 25 lands, that's 5400 boosters.

For MTGO users, these will not be redeemable which will cut their value. Although the early waves of supply that show up in October and November will be highly prized, the market for collectible cards on MTGO is small. Eventually the price of these cards will start anchoring to the originals; for example, a full frame version of Marsh Flats might end up at below 10 tix by Christmas.

Once the BFZ Expeditions do hit the market, there is going to be a ton of uncertainty about how to price them. Brave speculators will have to measure their valuations against the market and decide what to do. In recent memory, Wasteland of TPR started at 25 tix before quickly advancing to 40 tix, then 60, then all the way to 80 tix. This is a good example of how inefficient the MTGO market can be, so taking the plunge on an Expedition that seems priced too low might turn out to be an excellent decision.

Jund has not been totally put out to pasture in Modern and this card is priced attractively at the moment.