Pro Tour Oath of the Gatewatch is just days away and marks the last opportunity anybody will ever have to capitalize on Modern prices.

Okay maybe that is an exaggeration, but only a slight one.

Right now people are viewing Modern as though it is the dark side of the moon. Twin and Bloom are gone and nobody knows what's going to happen next. How will this incredible riddle unfold and what amazing revelations await us?

The fact of the matter is that there is a very large chance that Modern looks nearly exactly the same as it did before, except with no Twin or Amulet Bloom. I don't expect that those decks ceasing to exist suddenly enables a bunch of great new archetypes or makes a bunch of bad decks good. The remaining decks that were already Tier 1 are already so fast, so consistent and so powerful that there isn't exactly a lot of new space to occupy.

There are a couple of decks that I'd keep an eye on in these last few waning days. First we have the fast combo decks, that will probably see more play simply because two of the old "best" combo decks no longer exist. In particular, Goryo's Vengeance and Scapeshift are compelling as investments. However, it's questionable to think those decks would be better against the known decks than the ones that needed to get banned.

If anything I would assume that the non-combo decks got a leg up on the field because they were already among the best strategies in the field and now their combo competition has been slightly watered down. Every combo option is slightly slower and less consistent than Bloom or Twin, and whatever is the next heir to the combo throne will be worse than its predecessor.

Now, keep in mind that doesn't mean that whichever combo deck becomes the darling on the PT won't skyrocket in price... Because it most certainly will.

These are the cards I'm betting on as we move into the final stretch. There is still opportunity to get in on these cards at attractive prices.

Inkmoth is in both Infect and Affinity which appear to be two of the best positioned decks going into the tournament (at least with regard to online performance). Both decks are lean, fast and linear---and I expect to see them in the Top 8 of the Pro Tour. Also, no Modern Masters 2015 reprint makes me inclined to believe the price on this card will jump if it gets any PT validation whatsoever. 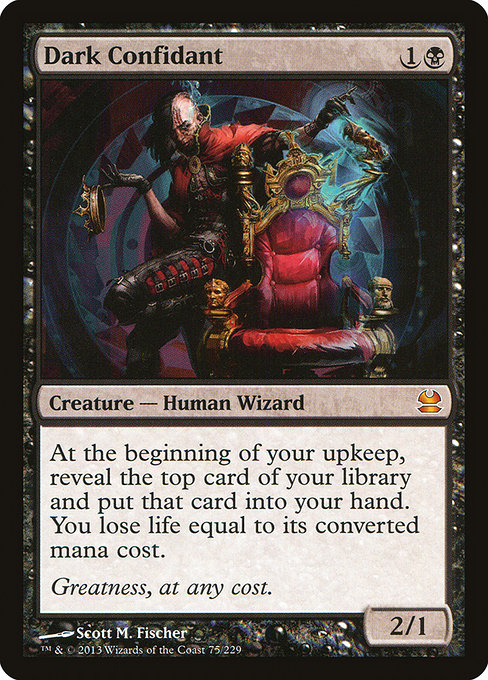 I also expect to see a lot of GBx decks floating around at the Pro Tour. Amulet Bloom was a tough match-up for Jund and I like the way the deck is positioned against Affinity and Infect. It has great removal and overall high-impact and versatile spells.

With Twin out of the equation, we may well see a resurgence of Dark Confidant decks. In the current price range it's a card I'd be interested in acquiring before the PT.

My bold (or not-so-bold) prediction is that after a high finish at the PT, several cards will make the leap from the $60-75 range up over $100 in advance of the Modern GP season. It just feels like the logical endgame of all of this hype, speculating and publicity.

Acquiring high-end cards is typically risky. But in this case I don't see many situations where these cards are likely to lose value any time soon, and the opportunity for growth is very high. It is one of the few instances where I think picking up cards on the high end like Grove of the Burnwillows, Arcbound Ravager or Horizon Canopy looks to be an appealing option. 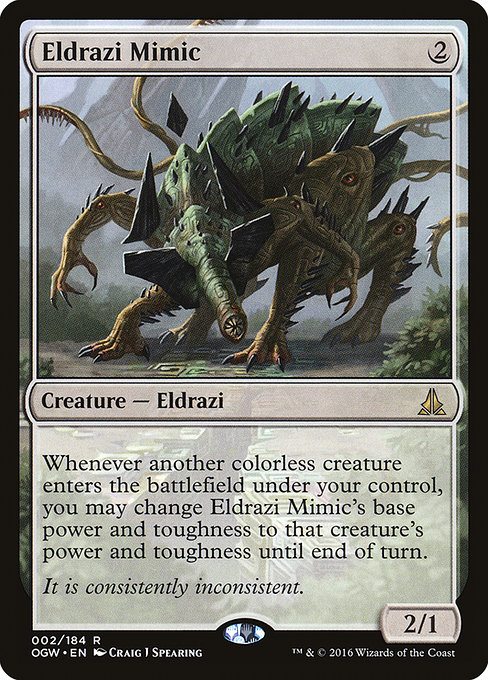 I also think some of the new Eldrazi cards have potential. I've tested various builds of the Eldrazi deck and they are all very solid. Mimic is one of the cards that's still languishing behind on the hype train.

I'll be surprised if a truly "broken" build of the Eldrazi deck shows up without featuring this psuedo one-drop. Being able to drop two of this card on the first turn off an Eye of Ugin and follow it up with a 4/4 Thought-Knot Seer or Endless One and an attack for 8 seems truly ridiculous.

Modern has already proven it can facilitate the existence of $15 commons and uncommons like Serum Visions, Inquisition of Kozilek and Remand. These particular cards have seen drops in value due to recent reprints, but what other cards are sufficiently rare and will see sufficient play to warrant big spikes in value after the Pro Tour? 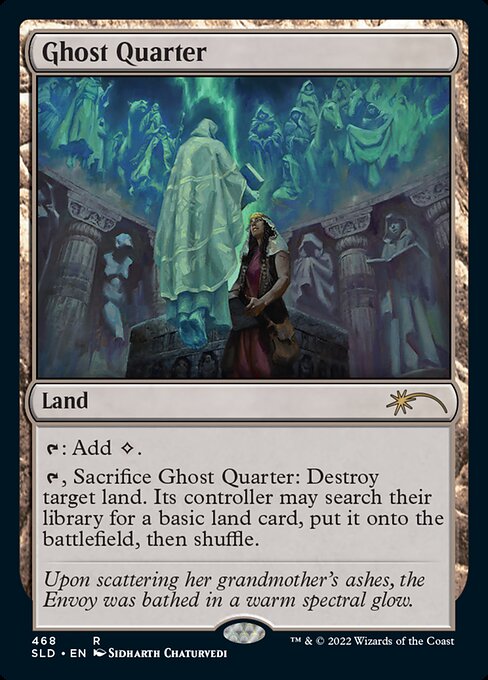 I've been telling people on QS to buy in on Ghost Quarter since they were $0.50 and they are up over $2 now. It is the second most played card after Lightning Bolt. I don't think $3 is the ceiling here, especially on the older version with clearly superior artwork. 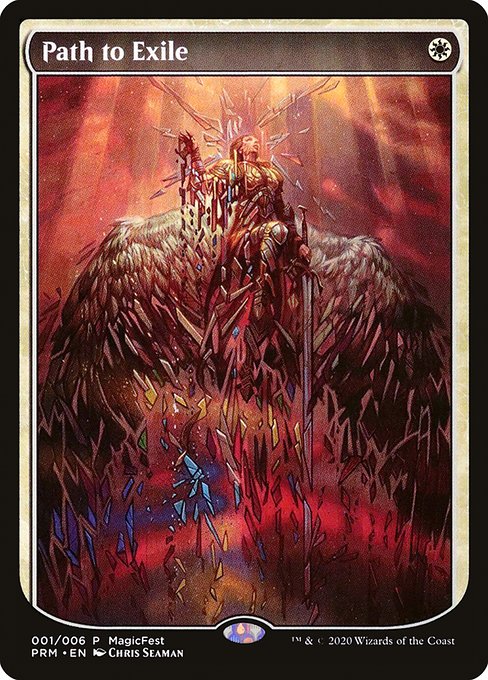 I love Path to Exile as a speculation target. Despite being one of the perpetual top 10 most played cards in the format (and an auto-include in any deck playing white) the card hasn't seen any growth amid the entire Modern boom!

How is that even possible?---it isn't like there's less demand for Path than before. This is my prime pick this week as a lock for growth.

My advice for getting your last chips into the pot before the Pro Tour is simply to look at lists of the known best decks and pick cards that haven't spiked yet. Modern is largely a "solved" format in the sense that it has been played a zillion times and people have already built the "great decks." In order for a deck to emerge in a non-rotating format there needs to be some pretty significant innovation. 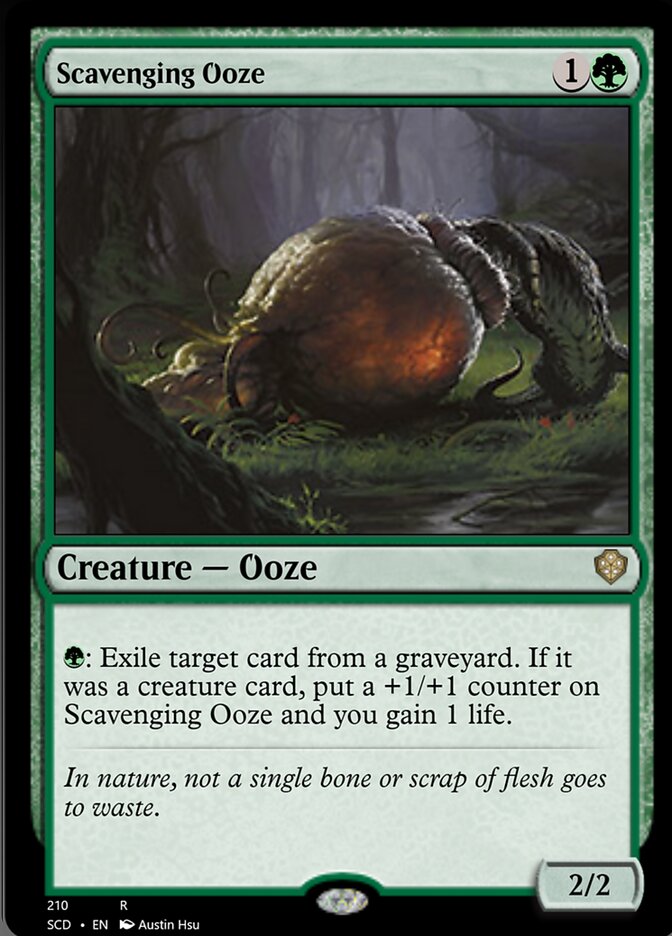 Scooze is just outside of the Top 10 most played cards in Modern, an M-set rare, and still commands less than a $10 price tag. I don't even understand how nobody has bothered to buy out the internet on this card. Do I literally need to do it myself? The card is insane. I'm strongly considering playing Jund at the PT and this card is one of the reasons why!

What to Expect at the PT

I think we may see some new decks but I don't anticipate a Modern dominated by unforeseen aliens that nobody expected (well, maybe Eldrazi...) just because Twin and Bloom rotated. Those decks rotating make the other known decks even better because there is less competition at the top of the mountain.

These decks are all proven winners and are not suddenly going to become bad or go away any time soon. My strategy (which has been very solid thus far) has simply been to look at the cards in these decks and pick them up before the Pro Tour.

Most importantly for those of you who manage modest collections and are just trying to get the cards to play at an affordable price, my sincere advice is to pick up whatever you want to play before the Pro Tour. I don't see much opportunity for cards to go down afterwards.

Also, I'd like to add that in preparation for the Pro Tour I played roughly 45 Modern events in the past 60 days and did numerous testing sessions with friends and I am not playing an off-the-radar insane brew. I could not find a single "brew" deck that was anywhere near as powerful or consistent as the Top 10 known decks in the format.

Is it possible that one of the super teams broke the format and is playing some wild Krark-Clan Ironworks combo deck? Absolutely, anything is possible. So, if you've got an insane broken strategy in your back pocket and you think it's great I'd bet on it right now and buy up some extra copies. However, aside from betting on broken cards or decks I really believe the smart money is on the known best decks and best cards.

What a novel idea. Bet on winners. It is going to be hard to lose betting on Modern once the PT results are in.