“Get to the choppa!”

It’s not only a quote from a great sci-fi movie, Predator, but now it’s the motto for Standard. I may have been late to the copter party, but now we’re all on board. Smuggler's Copter has flown through the metagame more thoroughly than even Siege Rhino. We may be talking Bloodbraid Elf levels of infiltration with this flashy new artifact.

Get to the Choppa!

And that’s exactly what every member of the Top 8 did this weekend at the SCG Indianapolis Open. They all piloted Smuggler's Copters to victory. Thirty-two copies of one card in a Top 8 is oppressive. That’s more than any Collected Company Top 8 and more than any Bloodbraid Elf Top 8. We’re talking more than Jace, the Mind Sculptor and more than Stoneforge Mystic. The only card I can think of to truly compare this vehicle to is Umezawa's Jitte. That may seem like a bold claim, but no other card has been able to creep into every decklist like these two.

Obviously the biggest baddy of them all is the deck that landed at the top of the pile, W/R Vehicles. Not only that, but the deck landed four other pilots in the Top 8 as well! We know that Smuggler's Copter and this strategy specifically is the big story of the moment.

The card I like most financially from this deck might surprise you. Needle Spires is an essential mana fixer and finisher in this deck, and I can barely keep them in stock. The ceiling on this land isn’t too high because it was from a set that featured Expeditions, but I think a new price plateau around $3 to $4 includes reasonable growth that we could see.

What we don’t know is how the metagame will evolve from here. Clearly something has to shift. We can’t just have all different variations of the same strategy. Take a look at the next deck from the Top 8.

This deck is listed as Rakdos Aggro, but honestly we should probably just be calling it R/B Vehicles. Look how many cards these two decks have in common! It feels like nearly half of both decks are the same. The red-black version offers reach in the form of burn spells—you'll get burned out if your life total dips too low. I like the small madness theme from this deck as well, and I’m surprised that someone other than me wanted to include Key to the City to enable the mechanic. Making your guys unblockable is great too, especially in combination with the burn spells.

I’m surprised that Bomat Courier hasn’t popped up above a dollar yet, but I’d expect it to increase a little. Pia Nalaar is the real gem, though. All of the Copter decks want her because she provides two pilots plus bonus abilities to go along with them. Scrapheap Scrounger is cheap right now as well, and it’s seeing play in multiple archetypes, so that’s one point in favor of future growth.

Take a look at it in our next Top 8 strategy.

Originally, I thought Temur Emerge was the deck that broke through to the Top 8, but as it turned out, it was Grixis. This deck feels like it’s trying to do similar things to the Rakdos deck. Both decks are messing with the graveyard a bit, but this deck is trying to push the game into the mid- and late-game with the emerge cards. I don’t know if this is the best Kozilek's Return deck we will see in the metagame, but we all knew that card is too good to sit on the bench the whole season.

Over the past few weeks, I’ve continually lowered and lowered the price on both Elder Deep-Fiend and Distended Mindbender. Every time I have to lower these prices, I get more and more confused. With how much play these cards are seeing, and they are from a non-Masterpiece set, how can they continually drop in price? I think in part it has to do with the fact that they are from a small set, but they are rares so that makes it harder for them to increase as well. I still think they are good buys, though.

4 Smuggler's Copter
3 Grapple with the Past
4 Grasp of Darkness
4 Traverse the Ulvenwald
3 Liliana, the Last Hope

Last up on our helicopter tour of the first big Standard tournament of the new season is G/B Delirium. Looking at the Top 8, I would have guessed that either this deck or the Rakdos one would have ended up winning the event. This deck has a cheap creature with deathtouch, Grasp of Darkness, and Smuggler's Copters of its own. It also has Ishkanah, Grafwidow as a great blocker and great midgame threat/finisher. If there was a deck that played four Grafwidows, that card could easily double in price. I think with a little tuning, this deck could be more suited to the expected metagame.

Where Are We Flying Next?

Unfortunately, I think the answer to help any struggling strategy may just be to add some Smuggler's Copters. My friend has been working on a Sultai graveyard deck and my honest advice was to suck it up and add the best card in the meta. I wouldn’t leave you with just that as my only advice though, so let’s see what else we can come up with. 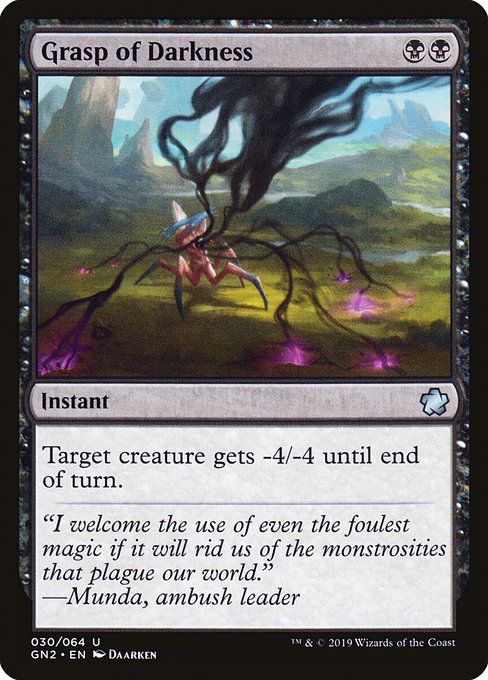 I think the first answer may be just playing more targeted, instant-speed removal like Grasp of Darkness. You could also play Murder or Unlicensed Disintegration or any other spell with a similar effect. Cards like Declaration in Stone are no longer answers to all of the threats, and in fact, Declaration can have a bigger drawback as well. Giving your opponent an artifact now is almost like giving them a Glorious Anthem. With the green decks playing Blossoming Defense, the white decks playing Selfless Spirit, and the green-white decks playing both, I don’t know how reliable we can be on a couple targeted removal spells. It’s a start though.

The best direction I’ve come up with is the centerpiece of the strategy I’ve been working on now for months and that’s Nahiri, the Harbinger. She comes down and can exile the helicopter that attacked you last turn. Sure, you don’t deal with it immediately, but I’m sure you are pairing her with removal spells to help out as well. We all know Nahiri is great, but I think now may be her time to really shine in Standard. 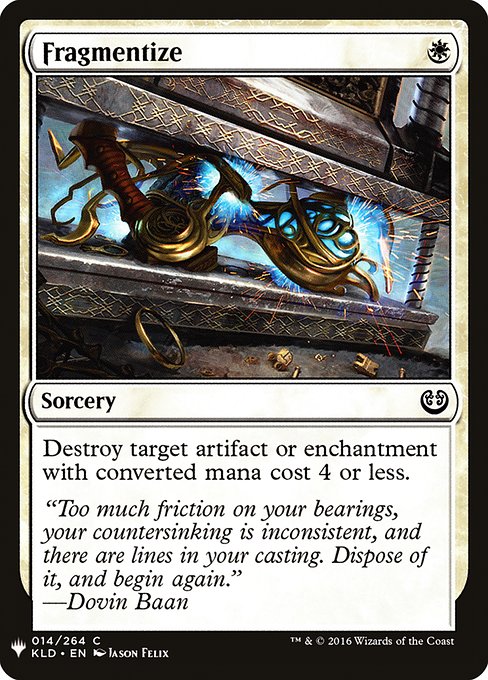 Is it that time? Are we ready to rock some maindeck artifact and enchantment removal? If every deck is going to have targets, we may just have to play cards like Fragmentize or any other similar effect. Unfortunately, there are no cards of the caliber of Kolaghan's Command. If that card were in Standard, it would be in so many decks right now. We need a versatile card like that, maybe not quite that power level, but something that gives us options and isn’t dead when the opponent doesn’t have an artifact. We could find running Shatter-type effects as a one- or two-of in the maindeck to be worthwhile. I don’t think that would be crazy right now.

We have a lot to look forward to from the Pro Tour. I’m sure the pros will show off how broken Smuggler's Copter really is, but they may also come up with something that we haven’t seen yet. I’m excited to see what comes from that event and what the smartest minds in the game today can brew up.

To finish off the article today, I’ll just leave you with some fun topical lyrics.

Until next time,
Unleash the Choppa Force!

One thought on “Insider: Navigating Standard from the Copter’s Seat”