You probably remember me from articles like "bulk rares," "bulk commons and uncommons" and "trying to find new ways to sort Magic cards." Those were never actual titles of my articles, but they cover a significant portion of my writing topics over the past three years.

Sometimes I feel like my bulk content might be out of reach to some players, especially when I talk about the scale that I and some of my friends work with.

Looking back, it kinda feels like the "rich people should just buy more money" argument. The reason I'm so knowledgeable about bulk picks and maximizing value out of bulk is because that was the only tool I had to work with as an aspiring competitive grinder. With no rare or valuable cards in my minuscule trade binder, I worked my way up by pulling Hada Freeblades and Wall of Denials out of my prize packs and finding people who would trade them into Luminarch Ascensions.

Ah, the good old days. Reminiscing aside, it feels like I've gotten a bit out of touch with the bulk of the community: players who own collections much smaller than mine. I know that when I first signed up as an Insider over four years ago, I was working with a collection smaller than the one I bought on a whim yesterday, pictured below. 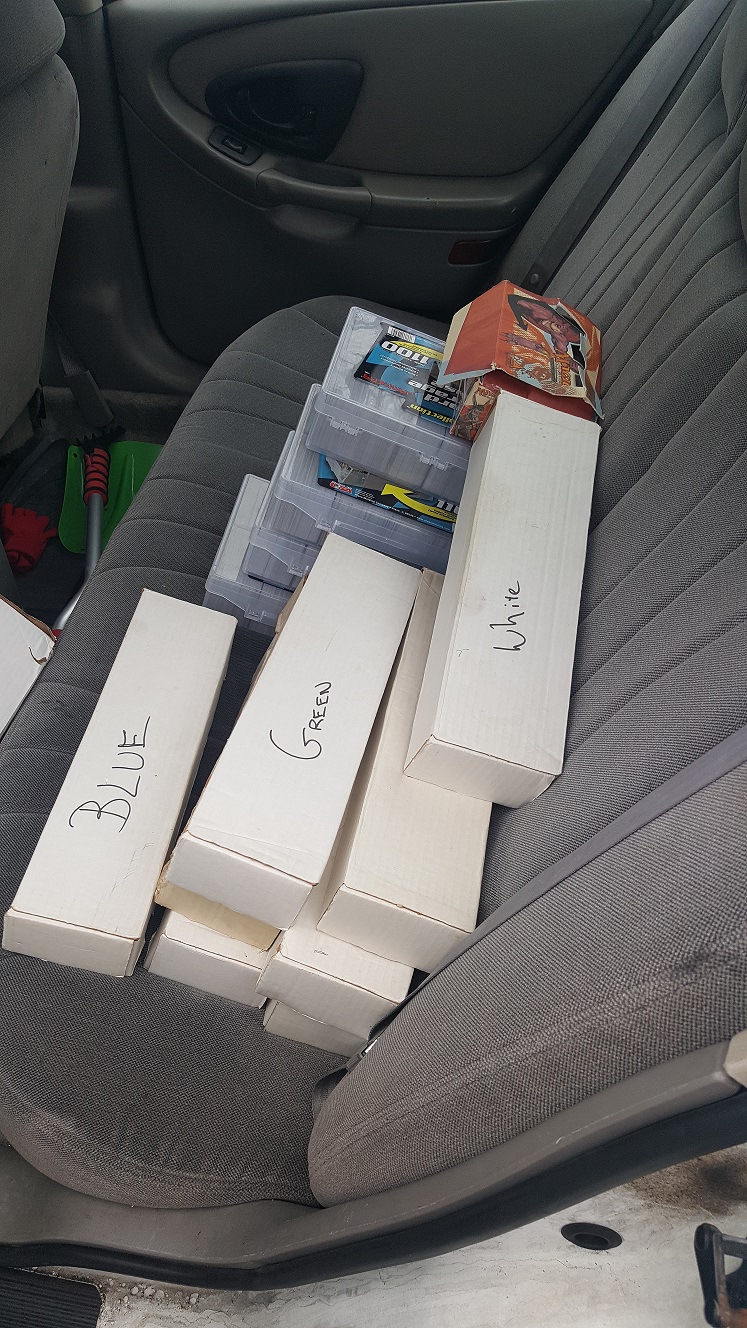 I get some sort of sick enjoyment out of trying to figure out the best way to sort my ever-growing collection, even though I've probably never had everything 100-percent completely sorted and perfectly finished to my own standards. I do have a pretty good system right now that's been working for me, but I'm always looking to improve and min/max the amount of value I get out of my cards.

The new relationship with that LGS I've mentioned in past articles has been working out great as an exit strategy for the $1 to $4 cards that aren't really worth listing on TCGplayer (because the flat fee and shipping costs eat me alive). I'd rather get $3.60 for a $4 card than $2.50, but that's just me. The end result of this has always been focusing on what the best way to sort *my own* collection is, as opposed to yours.

Up until now, I've expanded on my own sorting strategy as my collection and its needs have grown. Once I had a 5K box of inventory worth listing on TCGplayer, I knew it was finally time to get rid of the binder system (why I was working with eight or more trade binders for over a year, I have no idea) and start a more efficient method of set sorting in conjunction with alphabetically listing. The upside of being able to easily find everything easily outweighs the theoretical losses from when someone wants to look through your stuff. I can count the number of people who I let look through this 5K on one hand. 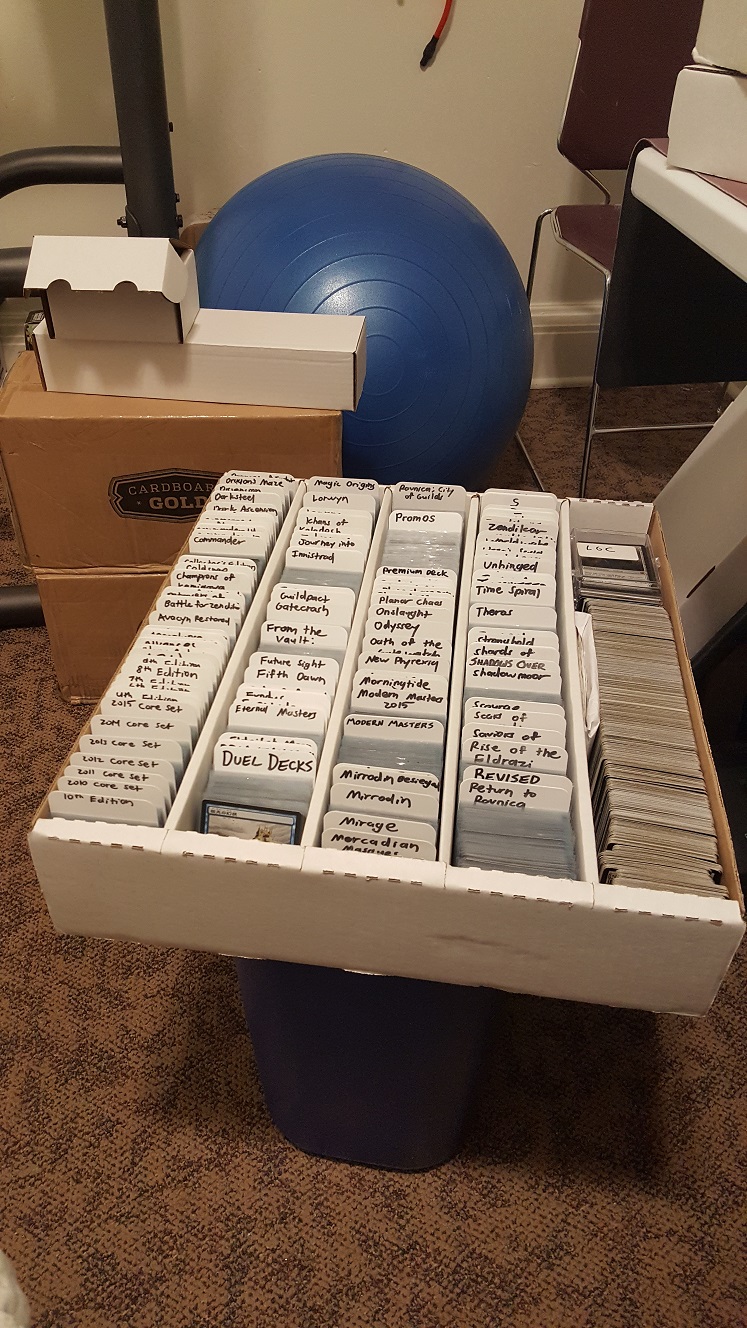 If you're reading this and thinking, "Well, what the heck, DJ? I don't have a 5K worth sorting like that. I just have a trade binder organized by color, and like 8,000 bulk commons and uncommons. I started in Theros." Well, good. This article is actually for you. If you have a Standard/Modern/Frontier/EDH decks and just want to play the game cheaper, buckle in. I'm going to assume you'd rather not go through the hassle of buylisting, blueprinting, or creating giant sorting stations like you saw on the thumbnail of this article.

If you've purchased a collection or two in the past, there's a good chance that the bulk commons and uncommons were sorted by color; like the boxes shown in my car if you scroll up a bit. When you start playing Magic, it's the easiest sorting method that gives you a workable number of piles while still letting your cards be accessible. If you only have 1000 white cards, 1000 blue cards, etc, then it isn't too much of a struggle to find that one Preordain you know you have lying around somewhere; just check the blue pile. Know you've got some Servant of the Conduits and Woodweaver's Puzzleknots somewhere? Scanning 1,000 cards only takes a few minutes, so it's not that big of a deal. I'm here to tell you today that sorting by color is okay, as long as the number of overall cards is kept to a minimum. This is a rough estimation, but I'd say that color sorting is fine if your collection is less than the size of a 12k card house. 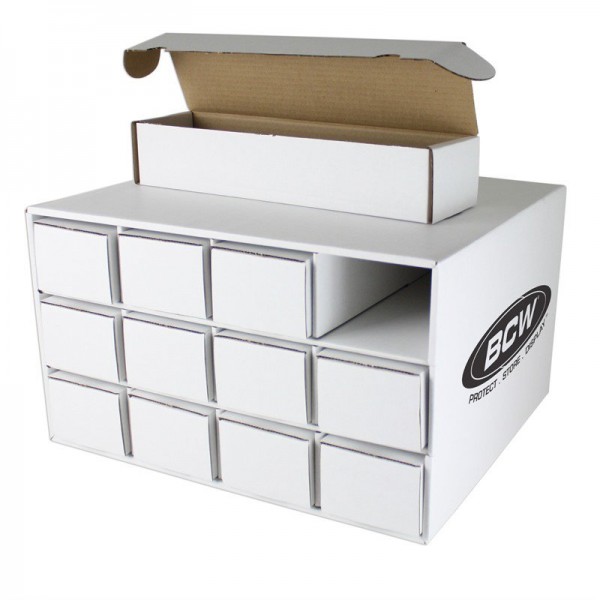 After you sort by color, you're usually left with 8 or 9 piles, depending on if you keep tokens or not. White, blue, black, red, green, multicolor, colorless, land. If you're running with a card  house worth of bulk and a single trade binder for the goodies, this gives you some room to overflow into secondary boxes for what you have more of.

Now comes the fun part (you can do this while you color sort, but it might slow the process down a bit): remove every single card that you might ever consider playing in any sort of deck. This is sort of the base level of picking, but it helps for those who don't know that Sunbond is worth 40 cents on a buylist and wouldn't care to ship and package a hundred of them. Pick out every card we've talked about on Brainstorm Brewery's "Breaking Bulk" segment, and check the #breakingbulk hashtag on Twitter for some helpful suggestions on what to pick out and throw in your trade binder. If it's worth 50 cents or more, toss it in the binder. If it's just a pet card that you might consider playing one day in Standard/Modern/EDH, just set it aside in one of the empty card house boxes. You probably won't reach 1,000 picks to have it fill the box, but that's fine. This is where you're throwing your Terrarions, Mana Leaks and Darksteel Citadels, just in case you ever want to play Modern Eggs/Pauper Delver/budget Affinity. 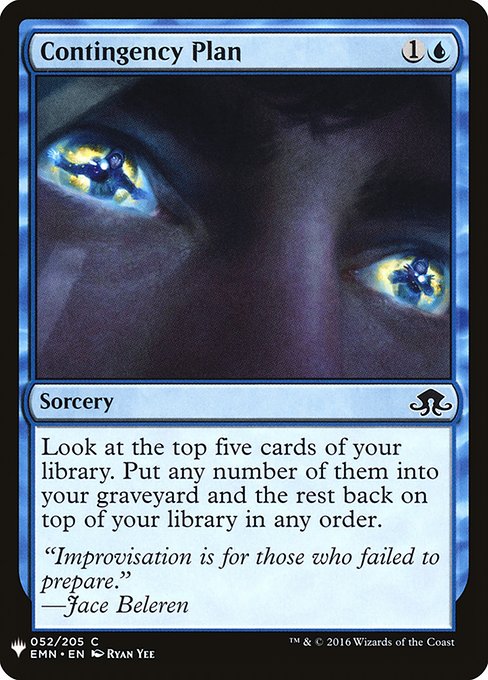 So now you've got your binder full of goodies, your bulk organized by color (just in case you ever need to go looking for a playset of Kaladesh commons for a friend, or should you realize that you have an urge to build Omnath, Locus of Mana and just know you have a Monstrous Onslaught in the green somewhere). What to do with your bulk rares? Well, throw those in your binder too if you've got room. While I don't advocate mixing them in with the rest of your actually relevant cards, there's nothing wrong with keeping bulk rares on hand if you have the room to carry them, just in case. That one time a casual player comes into the LGS and get's excited by your Aethersquall Ancient because it's a giant freaking whale, you'll thank me for the $.50 you get in trade.

This is sort of just dipping my toes into the area of "sorting collections that aren't a billion cards," so let me know what you think. I don't know if there are Insiders out there who will benefit from this information, so let me hear your thoughts in the comments section, or on Twitter where I'm more likely to notice it at @Rose0fthorns. Maybe we can go deeper into organizing by set/format for those with a little bit larger collection next week. Hmm.

Anyway, Retract finally popped, as did near mint copies of Reshape. Right now I'm still looking at foils of  Rhystic Study creeping up at $20. I had a couple dozen copies in my cart at SCG a month or two ago, but got cold feet and now they're out of stock. If you're a Commander player and want to lock in a foil anytime soon, I highly recommend it. Buying into nonfoils is risky due to the reprint possibility in Archenemy, but if it does get the reprint hammer, then we'll see an amazing buy opportunity.

4 thoughts on “Insider: Sorting by Scale”