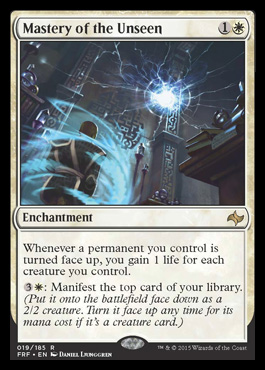 Come see all our Fate Reforged spoiler coverage Mastery of the Unseen Here we are. A card I really don’t want to review. Why? Basically, this card is a bulk rare or a $3-$10 card and it all hinges on how good Manifesting actually is and how many decks want to take advantage. This reminds […]

View All Fate Reforged Spoilers   Mastery of the Unseen Here we are. A card I really don’t want to review. Why? Basically, this card is a bulk rare or a $3-$10 card and it all hinges on how good Manifesting actually is and how many decks want to take advantage. This reminds me a […]

Sometimes you find the most wonderful treasures in the bargain bin of forgotten Commanders!