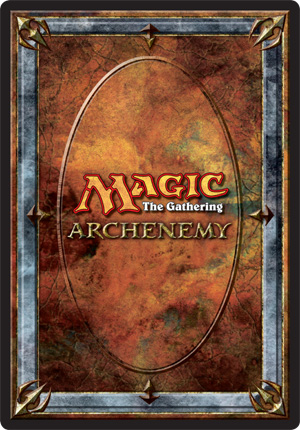 But DJ! That's a super arrogant title; you're not a genius at MTG finance, or anything really. Why would you start off your article on such an aggressive note?

Because I'm your archenemy today, that's why. Mwahahahaha! 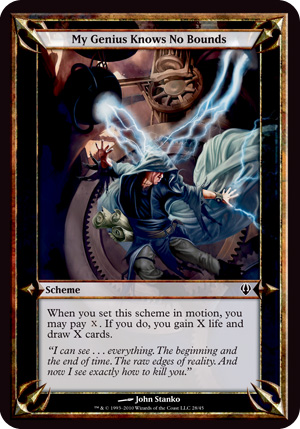 So remember that collection I bought a little over a week ago? The one with all the tokens that I may or may not list on TCGplayer based on my recent frustrations with the platform as described recently on my Twitter? Well, it also has a pile of Archenemy schemes and Planechase planes.

But DJ! How many schemes and planes did you get in that collection? Surely not enough that it's worth spending an entire articl- 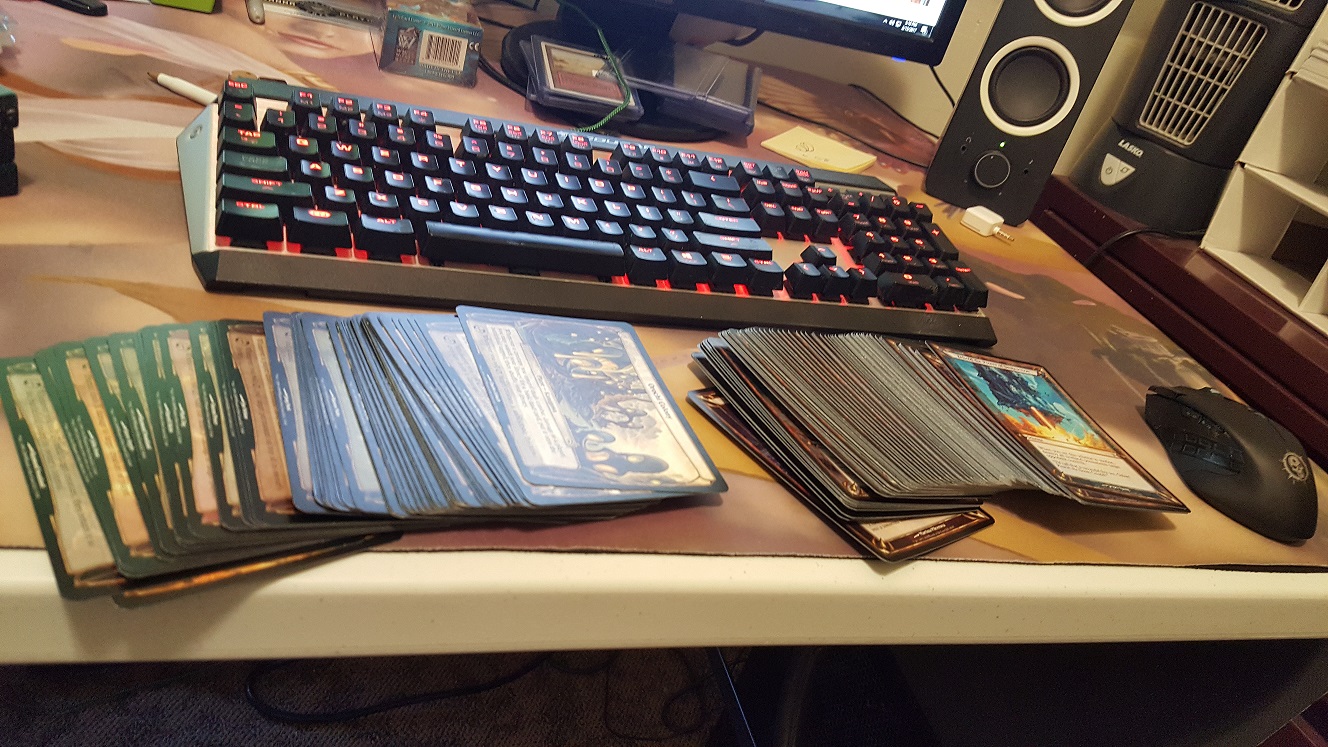 Yeah. That's a lot of machinations going on over there. A lot of worlds to visit, several evil plots spanning across centuries, you know the drill. Very Bolas-y stuff goin' on.

I don't have a whole lot of experience in buying these, because they're so freaking rare to find in collections nowadays. Even then, you might just get 10 or 20 from someone who only bought a single preconstructed deck. I didn't really know what to offer the guy offhand, and I knew even less about which ones were worth money or where to sell them. He let me know that I could basically have them as throw-ins toward the end, as a thanks for going through the rest of his collection so thoroughly. Once I had a little bit of time to look up some prices when I got home, I started to be blown away by how much these relics from six or seven years ago are worth.

Behold the Price Tag of This Stupid Thing

Holy crap; that's more surprising than that undead Goblin token that we talked about last week. Are all of these stupid casual coffee table coasters this expensive? Did I basically win the lottery by getting this jank as a throw-in? Well, unfortunately the cream of the crop had already risen to the top of the pile when I started to price check these things. The rest of them range from $1 to $7, with most leaning towards the lower end of that spectrum. Who knew that the Time Walk and one-sided Planar Cleansing would be the most universally in-demand schemes?

Certainly not me. I bought one of these decks back when I was a casual player in 2010, but my friends and I quickly grew bored of the format. We all wanted to be the one holding the free Time Walk or Overrun, and it was less fun to randomly get Bonfired or Mindslavered just because the Archenemy had the heart of the cards on that turn. I expect that lack of replayability is part of the reason Wizards decided to avoid revisiting the Archenemy product until this year, when it happened to fit the theme of the Amonkhet plane: a bunch of Super Friends trying to one-versus-five the almighty Nicol Bolas (sounds a lot like my average League of Legends solo queue experience, to be honest).

So what's the best way to go about selling these stupid things? Should we be listing them on TCGplayer, regardless of my previously mentioned frustrations? Well, let's take a look at the graph for the aforementioned supersized Time Walk impostor.

Once the market finally figured out what it wanted to pay on these schemes (things appeared to sort themselves out in the winter of 2015 two years ago), the price has practically traced that $10 price line on the MTGstocks graph, never really moving a dollar above or below that. That leaves us with a couple of possible results: either schemes constantly sell out at the exact price range of $10... or they sell extremely rarely and we don't really have many data points to go off of. We talk about this a little bit on this week's Brainstorm Brewery, but I'm leaning towards the latter. While there's obviously some level of casual demand similar to Planechase for those who want to mix up their Commander rhythm, I can't imagine that these sell constantly. I'd be interested to hear some numbers from a store who stocks these regularly, though.

So what do the buylist numbers look like? Well, the golden standard of SCG is willing to buy a relatively long list of various different schemes as always, giving you a fast and easy option to flip if you ever run across a pile of schemes in a Craigslist collection. The ChannelFireball buylist is similar, although I'd prefer to take SCG trade credit and then save that up for one of their weekly sales. Turning random schemes into LP/MP staples? Sounds good to me. 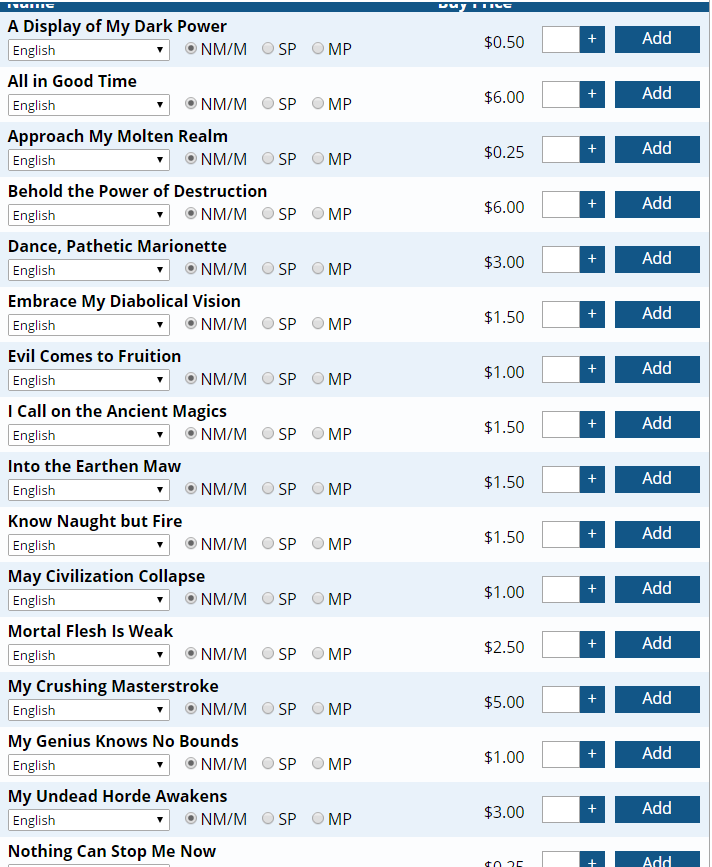 Remember earlier in the article how I talked about the upcoming release of Archenemy: Nicol Bolas? Well, I think that has some relevance with the schemes we've seen here.

We all know that the printing of new products encourages us to look at that past and find new synergies instead of chasing the new product. When The Gitrog Monster was printed, the correct play was to buy a pile of Squandered Resources instead of targeting the popular frog commander that sits today at the bulk rare bin. Want to spec on the Sram, Senior Edificer deck? You should've probably been buying Paradise Mantle and Sigil of Distinction instead of Puresteel 2.0. In this case, I think I might hold onto some of these schemes and see if they jump in price if there shows to be real demand for the Bolas Archenemy product. Maybe it'll cause an increase in people building scheme decks, and those people will need to scour the internet to find the right Time Walk scheme. I don't really know, so your guess is almost as good as mine. 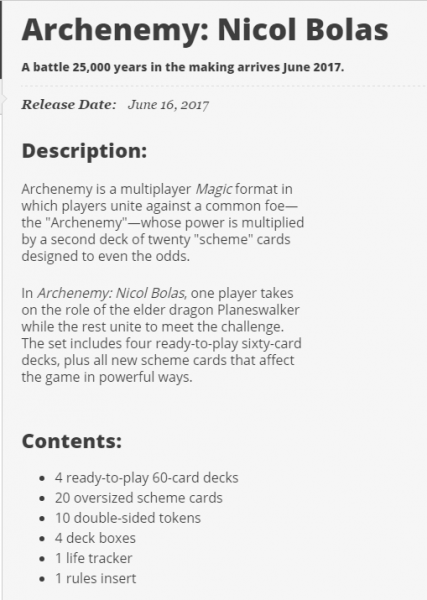 This product is really interesting to me: instead of selling four separate decks that each come with their own "scheme deck," this product comes with 20 schemes and four 60-card decks all-in-one, at the MSRP of $59.99.

Now, I'm not a distributor for WotC or an actual store owner, but I've seen several LGS owners complain that products like the various Anthologies collections that come with multiple decks have just sat on the shelf, gathering dust or eventually being used as prize support just to find a way to get rid of them. Maybe that's because those are just a pile of reprinted products from several years ago, but I'm curious if this product will suffer the same fate.

I'm sure there's a small number of playgroups who will split the cost four ways and each take home a deck while sharing the scheme deck, but how far does that market audience reach? Maybe this product gets lost in the wave of 40 other releases this year, and we don't see a lot of people opening it. At that point, I think we'll see a great opportunity to pick up several of the reprinted cards in the package, and maybe get some bulk schemes to hold onto for the long term.

Either way, these oversized casual gems are definitely something you should keep an eye out for, and maybe ask around in your local groups to see if you can pick them up for cheap. Thanks for reading!

2 thoughts on “Insider: My Genius Knows No Bounds”