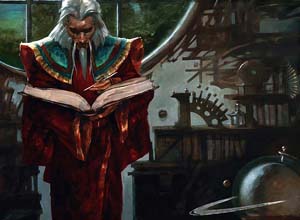 Hey, everyone! I appreciate the replies I got to the article a couple weeks ago, where I answered several of the common questions that I'm asked on Twitter. I was originally planning on using this week to complete the trilogy in DJ's Lotus series, but unfortunately, BGS took a bit longer to grade my card than I was hoping for. It was worth the wait though; wait till next week if you want to see what my Lotus got! (Or just go on my Twitter and spoil it for yourself; up to you.)

During the interim, I'd like to address a question that hopefully serves as a nice complement to the FAQ while being a relatively accessible topic that new will Insiders want to know about. Sometimes I feel like I've written on this topic more than once, but I've also written for three websites in the past four years, so I need to remember that my readerbase isn't static. Let's look at this comment from Aaron Wheeler on collection buying. 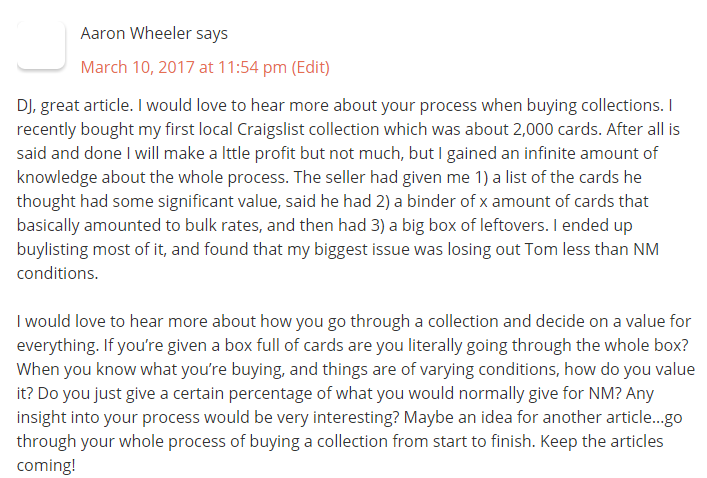 I don't think you should feel too bad about making a minimal profit, especially on your first collection. While I don't remember my first "collection," it's perfectly normal to break even or even just lose money altogether on your first time. The experience and reputation you gain for the future will be far more valuable than the extra few dollars you might have lost out on. You've already broken this question down into some pretty easy-to-answer parts, so thanks for that. I'll try to address each question, providing some examples and experiences along the way.

It sounds like the collection was sorted pretty well, and that the seller saved you some time. I'm always appreciative when people separate their stuff by perceived value, even if it's not completely accurate. It saves both you and the other party a lot of time, and that should be conveyed to them. I've bought (and sometimes turned away) unorganized messes of collections where the cards were scattered in a shoebox with no semblance of sorting, trash bags of bulk that Mom said "had some expensive ones in there" and other similar tales.

When you get nicely sorted collections, it's important to tell the seller, "I really appreciate the time and effort you put into organizing this for me. Not everyone is willing to do that, and it helps me help you." If you've been reading my articles for a while, you've probably seen my buy mat. You don't have to get anything fancy; even a blank playmat with a ruler and sharpie can work, but it helps organize and place the valuable stuff in a transparent and efficient method. This mat is how you want to price all of the non-bulk: the shocklands, the fetches and the random $4 EDH staples. The first list of cards goes on this price mat. Card conditions can be carefully examined before being placed on the mat, so you can pay 20 percent less on a MP Blightsteel Colossus versus a NM one, and so on. A discount of 5 to 10 percent is usually a good number for LP stuff, 15 to 20 percent for MP, and so on. I'm still perfectly happy buying played staples, because there's always those people who want the cheapest possible copy for Modern or EDH. 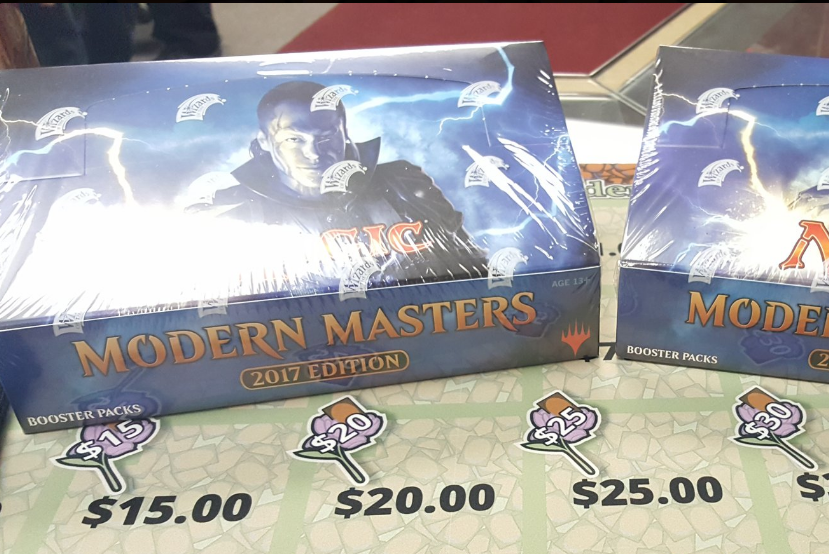 When it comes to the binder of cards that basically amounted to bulk rares, you're going to want to check the condition on those as well. Bulk rares are only worth picking up if they're near mint, so having them hidden away in a binder can be deceptive (although not maliciously so). You're going to want to pull out all those rares from the binder to make sure you're willing to pay 10 cents a piece on them. Don't pick up any of the foreign or beat-up bulk rares, because they'll be nearly impossible to get rid of consistently. I actually have a "played bulk rares" box at my LGS where I try to sell them for 10 cents a piece, and sometimes high school kids with a minuscule budget like to pick through them for their pieced-together EDH decks.

As for the third section, what you dubbed the "leftovers"; I'm going to assume that it was a little more than a thousand bulk commons and uncommons. I always tell people that I'll pay $3 per thousand, as long as all of their bulk is English, NM and facing the same direction/packaged well. Case in point: 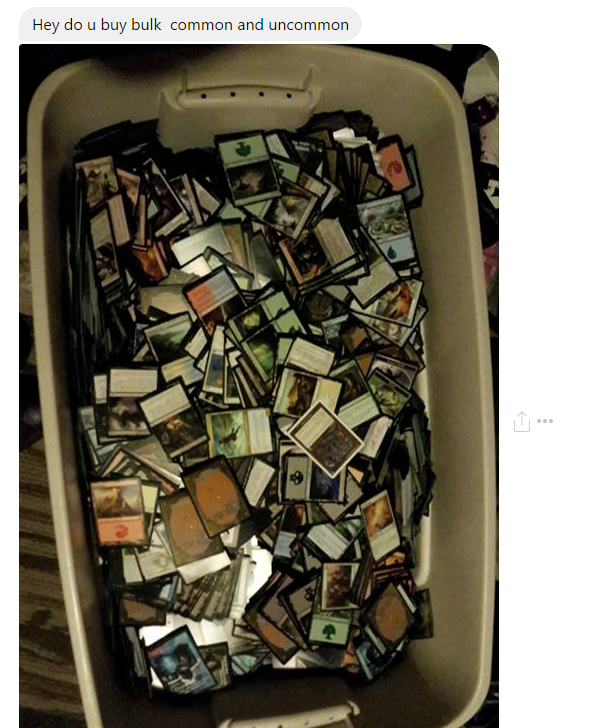 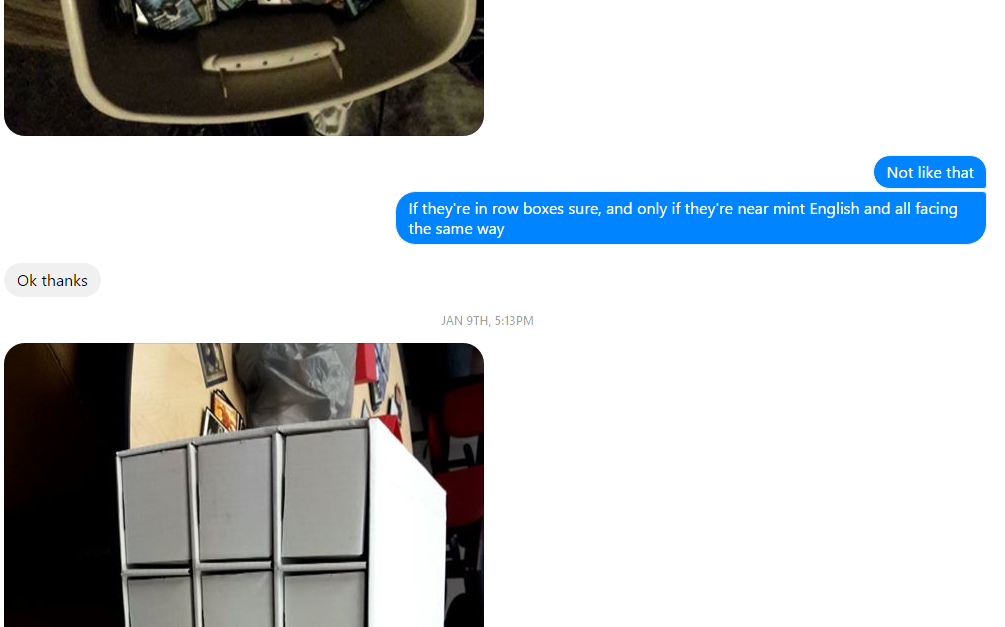 Don't ever buy bulk out of a tote like that. It's just... no. Not worth it, at all. You just want to be able to skim through it, pick it, process it, sell it. Do not ever assume that, "There's gotta be good stuff in there," unless you already see a ton of Paradox Haze and Rhystic Study at first glance while knowing that it has literally never ever been picked before. Your bulk rate is your bulk rate, and it has to stay constant. If  you're paying more for bulk based on what might be in there, you're practically buying booster packs at that point. The entire point of buying bulk is that it gives the other party a thousand opportunities to make mistakes. Maybe they left some Drana's Emissarys and Monastery Swiftspears in their old Standard bulk? Those are free dollars.

If  you're paying more for bulk based on what might be in there, you're practically buying booster packs at that point.

Based on the information you provided, it sounds like you did alright but got caught up by condition. Those three "piles" that the collection was sorted into (relevant stuff, bulk rares, and bulk commons/uncommons) are still how I sort collections of that size to this day. When it comes to large collections (6,000 to 10,000 cards), it gets a bit trickier, especially when they're not sorted by rarity or doing you any favors to make your job easier. If there's only a couple thousand cards, I certainly don't mind doing a quick skim of the entire collection to make sure they didn't miss anything super relevant like a Remand or a Lightning Helix. When it comes to a huge collection, though, I just tell people that they can pull out anything they'd like to sell separately, but I have to buy bulk as bulk. Most are understanding that I can't just gamble on unseen cards, although Craigslist does have its interesting personalities.

This process can also change depending on how well you know the person. Buying out the collection of a good friend is obviously a lot different than that of a stranger on the internet. Even if your friend has 10 to 15k cards with the rares mixed in with the commons and uncommons, it's not too uncomfortable to sit with him on a Saturday with some beers while you do a rough sort out of everything into the three above piles. On the other hand, neither you nor the Craigslist seller want you to be in their house for longer than necessary.

I can't stress enough that you should never pay for what you don't see, even if the other party assures you that "there's probably some Sensei's Tops in there." Pay $3 per thousand on the unseen bulk, and only if it's near mint and English. Buy the staples separately, and offer fair prices (30 to 50 percent of market price depending on the size and scale and condition of the good stuff). Sometimes you have to offer a lower number just based on the sheer man hours it's going to take to buylist everything. If they have several hundred $2 or $3 cards (Glacial Fortress/Boundless Realms kind of stuff), it's really difficult to just throw those on TCGplayer for a profit and call it a day, and you won't make anything paying 50 percent flat then buylisting later. You'll have to make adjustments on the fly based on the information you're presented with, and minimize your own risk as much as possible.

Well, Aaron (and others like Aaron who didn't comment but had the same general question), I hope this article was able to help answer your question. It sounds like you did pretty well for your first Craigslist collection, so I wouldn't beat yourself up over any mistakes or missed profit. Part of the game is learning from your previous purchases and adjusting based on new information. I find it always helps to be transparent, and never make too much money off a single collection. If I find insane stuff in the bulk, I try to contact them again and give them some more money for the finds. That's a surefire way to make them a repeat customer, and to get them to tell all their old Magic friends to bring their stuff to you.

Thanks for reading, and let me know if you have any other questions or comments in the section below!