Greetings, Nexites. We have some exciting things in the works this week, but today I merely get to bring you another Deck of the Week. Much as I wanted to highlight something novel from Grand Prix San Antonio, it seems an avalanche of Death's Shadow and Affinity decks were the going fare throughout much of the weekend. So far it looks to me like Death's Shadow (the card) is sort of the new Tarmogoyf, as it's seeing play across diverse color combinations, from Jund, to Grixis, to Abzan, to several varieties of four-color. No, I don't think it merits a banning, but that's neither here nor there. For Deck of the Week we prefer the odder to the established, so that draws our attention elsewhere. In today's case, back towards the noodly. 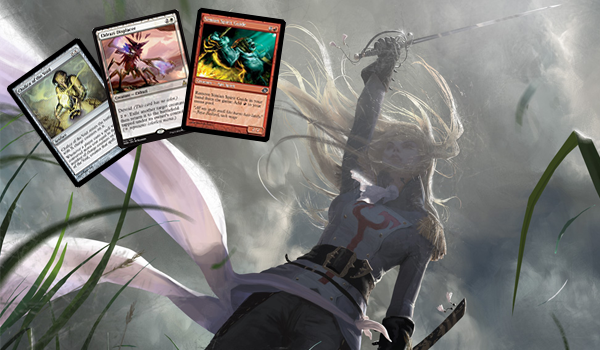 Since their auspicious return in Oath of the Gatewatch, the Eldrazi have made an enormous impact on Modern, spawning several new archetypes and revitalizing others. Putting aside Eldrazi Winter itself, which was more the fault of a Sol Ring impersonator than the Eldrazi themselves, they're the centerpiece of at least three post-banning decks: BW Eldrazi and Taxes, Bant Eldrazi, and Eldrazi Tron. Jordan, meanwhile, has been hard at work brewing and writing on Eldrazi Stompy. That deck tries to relive the glory days of busted Eye of Ugin/Eldrazi Temple draws with accelerants like Simian Spirit Guide and Serum Powder.

So what happens when you try to jam the stompy elements of Jordan's Eldrazi decks with the disruptive ones of Eldrazi and Taxes? It might be a tough squeeze to fit all that inside 75 cards, but MTGO user Stabilo appears to have managed. Since February, Stabilo has posted a few 5-0 League finishes—he or she has apparently stuck with the deck, and recently took it to a Top 16 berth in the MOCS.

This is definitely a get-'em-dead-now kind of deck. The creature suite is meant to hit hard and fast—there are no Tidehollow Scullers, Wasteland Stranglers, or Flickerwisps to generate card advantage and try to win the long game. They're pared down the disruptive creatures to just the most efficient: Thalia, Guardian of Thraben, Leonin Arbiter, and Thought-Knot Seer. Thalia's big sister (uh, also named Thalia, as it were) also makes an appearance. 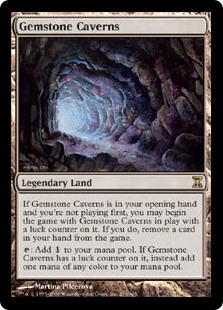 These elements, of course, appear in most of the Death and Taxes shells, but they're not flanked by the usual assortment of other hatebears and Aether Vials. Instead, we have Simian Spirit Guide and Gemstone Caverns to power them out faster, and Chalice of the Void to cheese out opponents.

The inclusion of Matter Reshaper points to this deck's overarching goal. It's not so much about the card advantage gained from the death trigger as it is the extra board presence. When you're trying to put the opponent on the backfoot from turn one, you want card advantage to hit in the form of more threats. Combined with the acceleration package of Spirit Guide, Caverns, and Eldrazi Temple, a dying Matter Reshaper helps to further cement your mana advantage and put the opponent in a bigger hole. All told, opponents are likely to be facing down a colossal amount of power and toughness in the early turns.

Of course, this explosiveness comes at the expense of longevity. For one, outside of Eldrazi Temple, those acceleration pieces require you to pitch an extra card to function. It won't be long before you're hellbent and at the mercy of the top of the deck. If Stompy and Taxes' initial onslaught of beaters are answered, it may be in for some trouble. The only late-game is really has is Eldrazi Displacer, and topdecks from an opponent are likely to outshine yours.

That isn't necessarily a bad thing, though—Eldrazi and Taxes decks are a little underpowered for a fair strategy, and this one gets to cut fiddly stuff like Aether Vial for the prospects of much faster kills. When you can't go up against interactive decks pound-for-pound, the winning strategy is usually to go unfair. Eldrazi Tron tries to do this by going over the top, with obscene mana production that can be funneled into Endbringer and Walking Ballista. Eldrazi Stompy and Taxes goes the opposite route and tries to get under interaction instead.

And what better way to undercut interaction than with Chalice of the Void? This is the deck's real late-game plan, attempting to brick huge swath's of an opposing deck in one fell swoop. It doesn't matter if our topdecks are medium when the opponent effectively doesn't get as many as us. And we don't sweat too much the possibility of them ripping an artifact destruction spell—we only need enough time to find that nail-in-the-coffin threat that will deal the final points. In this way the Chalice plays nicely with acceleration. The game is essentially contracted down to very few turns, in which the Eldrazi player will be operating at full capacity and the opposing deck will cast one spell per turn with many stranded in hand. Classic stompy.

Next week I'll have the write-up for the March metagame breakdown. In the meantime check back with us during the week, as I'll post the actual numbers earlier than that. This is something I intend to do moving forward, as it lets you see the meta earlier and relieves a little of the stress on my end. I'm also working to automate some of the data gathering—for the most part you won't see the effects of that directly, but it does mean faster turnarounds.

In other news, we're in discussions to bring on a few new authors, and I have some MTGO videos queued up for this week! Without teasing it too much, I'll say they should be of interest to anyone who tuned in to see GP San Antonio.