Two Standard weekends, both a PT and a GP, have concluded. As usual, some summary from my observations:

Overall the metagame has turned more toward midrange strategies, with more planeswalkers in 75s. Combo and control decks aren't doing very well, probably because they are not consistent enough and planeswalkers from a majority of decks are hard for white-blue decks to deal with.

I have found some interesting new decks from the last week. Let's go through them one by one. 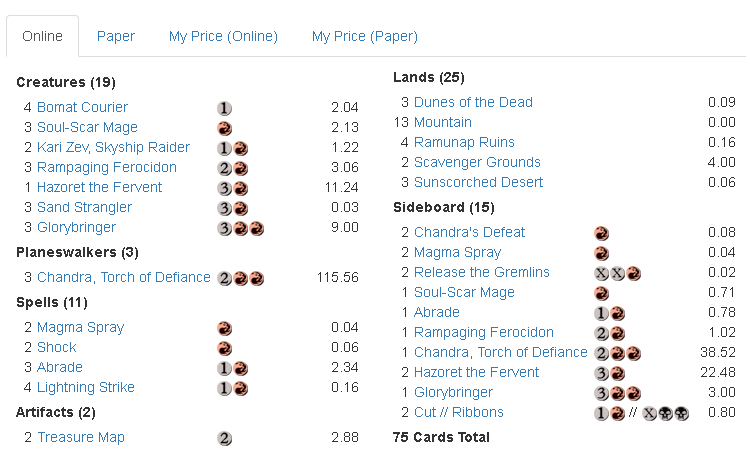 My impression of Hall of Famer Ben Stark is that he always has some innovative ideas on improving existing decks and taking them to another level. Take this "Desert Red" for example: it's a mix of Ramunap Red and some big threats like Chandra and Glorybringer. From this list, we can see some interesting card selections – like Treasure Map // Treasure Cove and Scavenger Grounds. Scavenger Grounds is a card that can be included in any deck as a hate card against graveyard strategies:

This land is very strong against decks like God-Pharaoh's Gift, as it stops every graveyard effects at instant speed. The card is especially good when played in a deck full of Deserts, like Ramunap Red. However, this card reached its peak last weekend, and probably won't go up again anytime soon. You guys should have sold them by now, and be sure to avoid buying any copies of these for investment purposes moving forward. If they ever drop below 1 ticket, that is when you guys should pick them up again.

Another card that caught my eye from Ben's list is Glorybringer. Currently, this dragon is only played in Temur Energy, so if this version of red aggro deck gets more popular, Glorybringer might increase to 4 tickets or more. There's another deck that plays this hasty dragon that I'll talk about later in this article, so the chances that this card will go up in price is pretty high in my opinion. 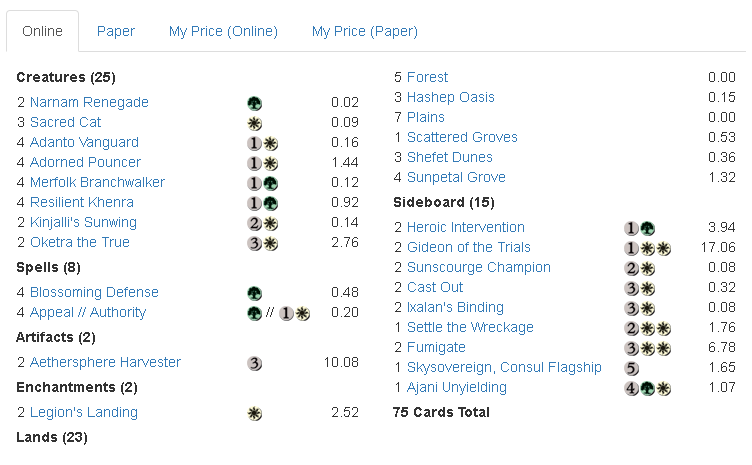 This is an aggro deck with a bunch of cheap cards that nobody was really paying attention to before this deck broke onto the scene. In some ways, the hype regarding this deck has already come and gone. MTGO singles fluctuate so fast that sometimes we literally need to be in front of our PC to gain profit from the spikes. If you see similar cases in the future and when a deck comes and goes extremely quickly, make sure you guys don't miss out the chance to earn a few easy tickets. When a budget and competitive deck comes out, for example from Saffron Olive's Budget Magic or from any top performing lists, do make sure you aim for the correct cards:

If you look at the following cards, you can notice the obvious spikes, and where they usually drop after a while once players stop buying them. The prices can fluctuate a lot in as little time as one hour, so it basically depends whether you are lucky enough to catch these. If you really want to be able to get these things, be sure to follow Saffron Olive's contents, especially Budget Magic, as well as some Japanese local event results, as Japanese players are very good at innovating new decks. 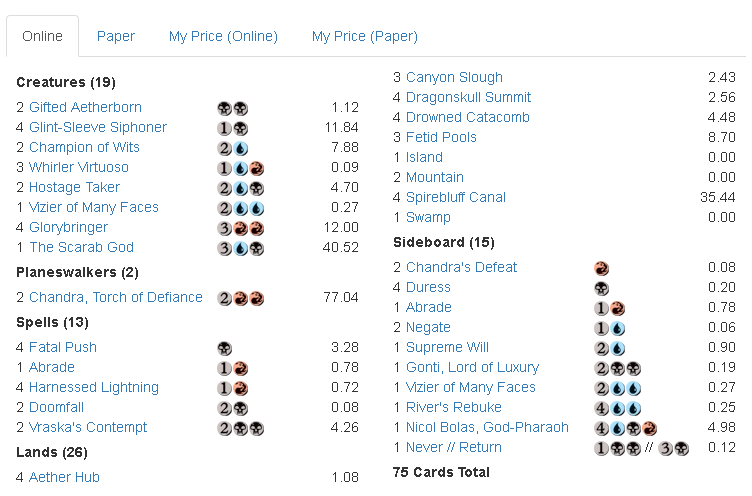 Here it is, another deck that plays a full playset of Glorybringer, as I said just a few paragraphs ago. I personally tried this deck and found it to be very resilient. It plays similarly to Temur Energy and slightly more powerfully than Sultai Energy in terms of the card advantage from Chandra and Glorybringer in this list. Basically, this deck has almost everything that a Sultai Energy deck has, namely Glint-Sleeve Siphoner, Hostage Taker, The Scarab God and plenty of removal, but the Glorybringers do make a big difference in games. I think this is a good deck to invest in overall.

Another card that I want to talk about is Harnessed Lightning. I've talked about this card here, stating then that you guys could pick them up at 0.1-ish tickets with your leftover credits and sell them off above 0.5 tickets. With this Grixis deck and Ben Stark's Desert Red appearing in the meta, this card has the potential to earn us profit in the near future. 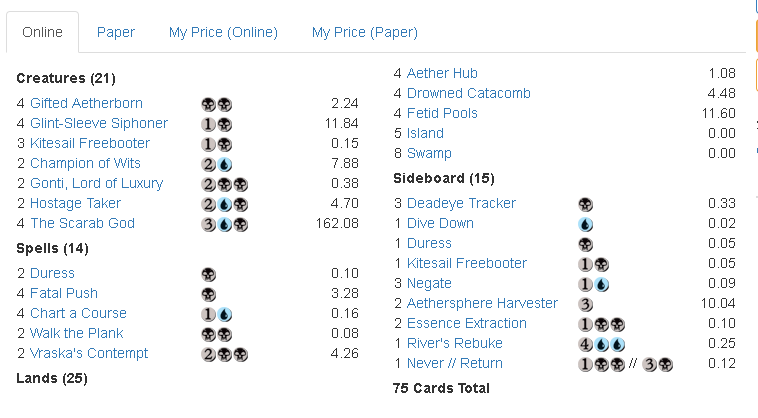 Next up, we look to Jaberwocki's deck. Jaberwocki is a well known Standard and Modern midrange/control player on MTGO. Instead of going the control path with these colors or going with Sultai/Temur Energy, he made a creature-based deck in blue and black, and it has performed surprisingly well. From this list, there are some cards that I want to suggest:

Vraska's Contempt is mainly used to deal with planeswalkers. Although this card has not seen play in decks other than green-black variants, the decks in the metagame have gone more midrange-style, with more planeswalkers like Chandra, Vraska and Nicol-Bolas. There are not many spells in the format that can destroy or exile walkers after they've resolved. This card is obviously not as powerful as Hero's Downfall from past Standards, but in my opinion, it will become a staple when the format is full of cards that can't be killed with Fatal Push, Harnessed Lightning and Doomfall. I think this card has not reached its absolute bottom yet, so you guys should put it on your watchlist for when it does.

Glint-Sleeve Siphoner is the Dark Confidant of Standard. Since the release of Ixalan, its price has been higher than usual as black-green variants play four copies of Siphoner mainboard. Now, with blue-black creature midrange from Jaberwocki, this card has the potential to go up in price again, like we saw with the spike in early November. Overall, efficient creatures in all formats are great to invest in when they are at their respective low points. Generally what defines "efficient"? In my opinion:

Alright, guys, that’s all for this week. I hope you guys found some useful information here. Thank you all for reading, and I’ll see you again next week.