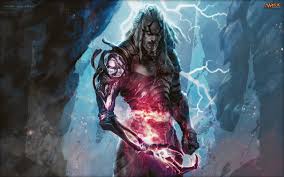 Hello, guys! Last week, I covered Modern staples and a strategy based on investing in them when they are at relatively low prices based on their price histories.

This week, lets talk about Modern decks as a whole. Have you considered whether you should buy in to one or more decks to play? If you are a competitive player or Magic Online grinder, you probably will just play the best decks in the metagame. However, if you are just a normal player who wants to get the most value out of your money, this article is for you!

Rule #1: Don't Choose One of the Top Four Decks in the Meta

First, to know which decks are the top four, you can go here. It's pretty simple: these decks are the strongest decks currently so their prices are usually at their respective peaks. So even if you are looking at playing Storm, yes, it's true that the deck is cheap, but it will not benefit you in terms of return on investment (except for the value you place on playing the deck and the prizes you win with it, of course).

Take the top four decks this week as an example. Storm and Affinity have been among the format's top four for quite a long time, so these two decks are out as far as buying in affordably goes! As for Grixis Death's Shadow, it just re-entered the top four this week. For Green-Black Tron, I did not see that coming, as Tron has not been good for some time, but we have been seeing variations on the deck more and more in events.

Although I did say not to buy in to decks that are in the top four of the metagame, you can absolutely still look at their lists for underpriced cards. For example:

Ugin is a powerful planeswalker that can become expensive when players online start to play a lot of Tron. So I suggest buying playsets of it at its current price.

Oftentimes, the most expensive decks are good from a competitive point of view but not from an investment point of view. The reason is very straight forward: expensive cards have a higher possibility to drop price than to increase in price. Let's take a few decks as example: 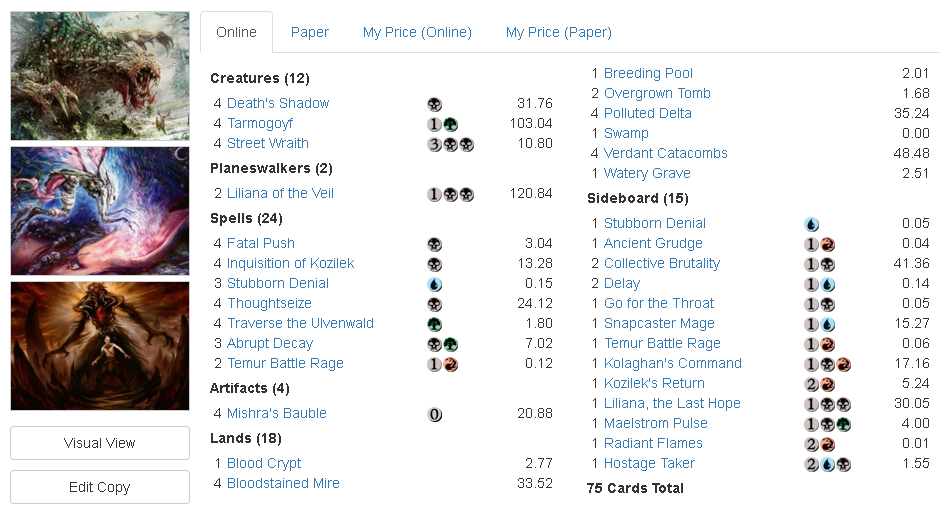 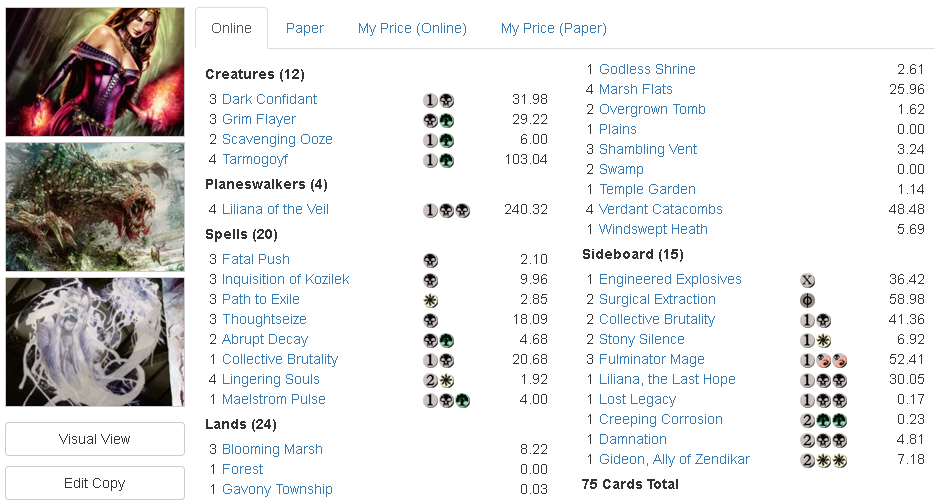 Abzan and Death's Shadow variants are the most expensive decks in the format. They contain the most expensive cards of the format like Tarmogoyf and Liliana of the Veil. Yes, these decks are very stable in competitions, but that's about it – you can only gain profit by winning leagues or events using the deck. The flipside of this rule is also true: while we shouldn't target expensive decks, we should target inexpensive decks. Modern is a format that has many viable strategies, and some decks might lose popularity, but that always might just be temporary.

Here's a throwback to the World Magic Cup 2016, when Dredge and Infect were the two best decks that every team would have at least one copy of. And then, this event led to the banning of Gitaxian Probe and Golgari-Grave Troll, which pretty much killed off Infect and greatly weakened Dredge. At one point, a Dredge deck online was only worth about 50 tickets. However, if you catch the correct timing to buy these decks, you would have earned plenty of tickets, as a Dredge deck is worth 200 tickets now.

In summary, Modern decks are like cockroaches: you may be able to kill them, but they will eventually come back. If you haven't yet, make sure you follow every new version of the Infect list online, as I can tell you, Infect players are trying hard to bring back their favorite deck – and they are almost there!

This is very similar to rule #1, but here I'm talking about rising decks that haven't yet made it to tier one. When a deck gets popular, it will also get more pricey. Also, when a deck appears frequently in games, players online will start to pack more cards to beat it, so picking a deck under this category is bad for two reasons:

Let's look at Green-Red Ponza. This deck might have seemed good when it first won some leagues. But this deck is too dependent on draws, in my opinion, and players can easily learn to play around cards like Blood Moon and any land destruction spells.

Compared to the tier-one decks mentioned in rule #1, decks in this category lack the consistency that a good deck has. So picking decks of this category as investment is a big no-no!

Rule #4: Know When to Sell Out

Alright, now you have picked your Modern deck as a combined tournament deck and investment. What do you do with it besides using it to join events? Obviously, sell the cards when they are at good price.

Let me break down further the different variables that will adjust the situation. Generally, our decision greatly depends on how many tickets can we gain by selling the deck versus tickets we can win through events.

When the deck is popularized and the price eventually goes up, that's the time to decide whether you should let go of your deck or keep grinding with it. Let's say you can grind and get 20 tickets daily or about 150 tickets a week, while the deck only increased by 80 tickets in value – it's probably better to keep the deck and grind the tickets through events. If it's the other way around, where you can earn more tickets by selling the deck, please go ahead and sell into the hype! This will vary based on the deck in question and especially your play skill, so you'll need to make the determination of what is most likely to earn you the most profit.

Alright, that's all for the week. Thank you all for reading, and I will see you guys again next week!