Hello, everyone and welcome to a new edition of the Daily Stock Watch! The crazy market movement for cards across the board is probably on one of its finer stretches in recent memory, thanks largely to the influx of information from people who are into #mtgfinance, and the willingness of some finance junkies to go all out on certain cards that they feel are worthy of getting the push. If you're into this kind of thing, I suggest that you check out Sigmund Ausfresser's most recent article about certain market trends for more information. Over this side of the fence, we're more focused on the immediate impact of some card spikes (or drops) on a daily basis from different formats, and how we could earn (or save ourselves) off it. Today's card is one that has just reached its all-time high after not getting reprinted in Commander Anthologies Vol. II, and it's looking good for the coming months until WotC decides that its time to make a new print run of it. 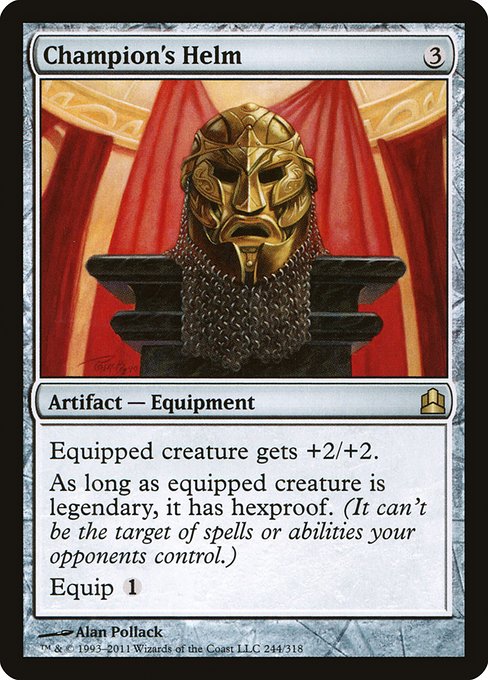 Champion's Helm is a fine Commander card as it allows combat savvy generals to lead their EDH decks to victory via the battlefield. It makes a relatively bad Commander look really good with the help of its hexproof clause, while also helping protect the fragile ones that need some cover to make its power level rise. Its power is evident in this Kemba, Kha Regent deck whose general loves to wear every equipment at its disposal to overpower the opposition. I've listed the whole deck down in alphabetical order just so you could see how many swords (and body gear) this cat cleric is willing to wear to victory.

If you're a fan of Voltron, then this is the deck for you. The addition of Champion's Helm on this list is just gravy, but it is very much searchable with the help of Steelshaper's Gift, Enlightened Tutor, and Stoneforge Mystic. Decks that specialize on the use of powerful artifacts such as this one have a distinct advantage over ones that rely on chance to draw the card, and only sees it as an extra option in keeping your Commander alive and functional at some points of the game. Nonetheless, this card is very powerful, although its current price tag might be deceiving because it has dodged a reprint (thanks in part as well to it being part of the Kaladesh Inventions series) and there aren't too many copies of it running around the market.

At the moment, you could still get copies of Champion's Helm via ChannelFireball, Card Kingdom, and TCGPlayer for anywhere between $14.99 up to $18.99. StarCityGames is out of stock of English copies, but they still have foreign copies of the card under $15 up for grabs. Do note that there are no normal foil copies of the card, and that's one of the reasons why I believe that this is still due for a reprint in the coming Commander products. I would recommend buying it now if you'll use it, but I wouldn't be too keen on getting them for spec purposes despite of the possible spikes that it might incur. I'm not really high on cards that aren't too chased in the market, especially with the risk of it being included in any product runs for the near future.