Arguably the most iconic card in all of Magic is the illustrious Black Lotus. It has always been a highly sought-after card due to its power level and in-game utility. Back in July 1995, InQuest Magazine put a value of $200 on an Unlimited copy. We all know what a nice copy of Black Lotus can fetch now.

One of the characteristics of this iconic artifact that makes it so powerful is its casting cost: zero. When an artifact has utility and costs nothing to cast, a world of opportunities open up. This is also what makes all five Moxes a part of the elite group, the Power 9. The extra mana acceleration in early-game is a tremendous advantage.

Since Limited Edition Alpha’s release, many other zero casting cost artifacts were printed. Some were spinoffs of the original artifacts of the Power 9. Others have bizarre, unique abilities. But as long as their abilities have some sort of utility, that zero mana casting cost means they have the potential to be used and abused.

This week I want to discuss some of the zero-mana-casting-cost artifacts that have made a splash in Magic, and then touch on a few that haven’t had their day in the sun yet but still have that potential.

Vintage isn’t the only format to be impacted by zero-casting-cost artifacts. Legacy has been utilizing a few of such powerful artifacts for many years. Lion's Eye Diamond is the most valuable, but we can’t overlook Lotus Petal, Mox Diamond, or Chrome Mox either.

It seems getting mana from a zero-mana artifact is broken, no matter what hoops you have to jump through to obtain it. Even discarding your hand.

Modern is also not without influence from zero-mana artifacts. Mox Opal is the most notable, but let’s not forget about Mishra's Bauble, an uncommon that had a price tag of $50 for a brief moment, before it was reprinted in Iconic Masters. What’s interesting about this one is that it’s one of few zero-mana artifacts that are useful even though they don’t create mana. Affinity stretches even further to incorporate Ornithopter, Memnite, and Paradise Mantle.

In Commander the pool of playable zero-mana artifacts expands even further. There’s Everflowing Chalice, which technically costs zero but has multikicker to make it more useful. Zuran Orb is a long-time favorite popular with The Gitrog Monster. And most recently, we saw the sudden spike in Shield Sphere, a zero-mana wall that can trigger Arcades, the Strategist.

I’m sure I’m missing other important zero-mana artifacts, but the bottom line is that these are often powerful either by themselves or when combined with another card that can exploit the low casting cost. Wizards has shown time and again that they like to flex this muscle, and I believe there are some more important targets from a speculation standpoint from among this pool of cards.

As Mox Opal breaks the $100 barrier, the newest attempt by Wizards to create a “fixed” Mox has been languishing quite badly. Mox Amber presold for over $30 at its peak, but now there are over 400 sellers of copies on TCGplayer and the cheapest listings are sub-$10. Foils are still around $35, perhaps in anticipation of a breakout for this zero-mana artifact.

That day will eventually come. It pretty much has to. Every time Wizards has made a zero-mana artifact that can provide mana, the card has been powerful and heavily used. Lotus Petal, Mox Diamond, Chrome Mox, Lotus Bloom, and Mox Opal have all proven dominant in one way or another.

It may take some work, but Mox Amber will follow this rule eventually. It may take the printing of some more one-mana legendary creatures, and it may take a couple years, but one day Mox Amber will be highly desirable. In the meantime, let’s watch it closely and try to acquire copies near a price floor. I don’t think we’re quite there yet.

Frequent readers of mine must be amazed: I just talked about a Standard card! This was perhaps the first Standard card I talked about in an article in years! But rest assured, I’m about to pivot to an area I’m far more comfortable with: the Reserved List.

Turns out there are a few zero-mana artifacts on the Reserved List that aren’t getting much love yet. There’s Lodestone Bauble, which I think saw a brief bit of Legacy play, causing the card to spike from bulk to $5. Now copies are around $4, but this could easily be much higher should the right combination of cards be printed to break this zero-mana artifact. If nothing else, you’re sitting on a Reserved List card with long-term upside. 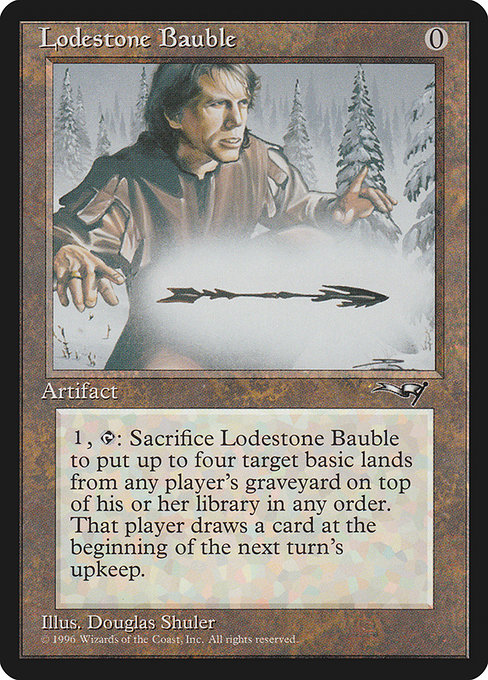 Some zero-mana artifacts aren’t on the Reserved List, but also have never been reprinted. Perhaps this is due to their complexity? I believe this is the case with Jeweled Amulet. The Oracle Text on this card is pretty awkward, so I don’t expect it will see a reprint. Given that it is an uncommon from Ice Age, perhaps it has some upside potential. It has already been climbing lately and is no longer bulk. But it gives you the ability to ramp a mana, which is nothing to sneeze at. I bet it can be combined with certain commanders like Arcum Dagsson in Commander to become useful.

Another worthwhile target could be foil Claws of Gix. It’s not a very popular Commander card, but Timeshifted foils are pretty rare. You never know when a new commander could get printed that rewards you for stealing an opponent’s permanent and then sacrificing it.

Lastly, you never want to write off the zero-mana artifacts from Un-sets. Blacker Lotus has been flat for a while now, but the right catalyst (such as the release of a fourth Un-set) could create the next price increase. The same goes for Jack-in-the-Mox, which already spiked once when Unstable was released. Let’s face it: these silver-bordered cards aren’t getting reprinted any time soon!

Zero-mana artifacts are very unique in the game of Magic because they offer you some form of utility with no mana cost. The only resource required to use these cards is the card in your hand/deck they take up. But in the case of baubles that let you cantrip, the downside is really minimal.

The zero-mana artifacts that generate mana will always be powerful because they give you acceleration, again with no cost.

Zero-mana artifacts that don’t draw cards or generate mana often have some other open-ended synergies just waiting to be exploited. Should the right cards be printed, I could see a zero-mana artifact combo deck really taking shape. People have already been trying, and it may not take much more to push such a strategy over the edge.

It is this open-ended synergy potential that makes these free artifacts so attractive. They’ve been dominant in the past, they are very popular now, and they will continue to be dominant in the future. Mox Amber is really an example of one with tremendous untapped potential. But there are some non-obvious choices out there too worth your consideration. The Reserved List houses a couple, but some older zero-mana artifacts are virtually not reprintable and can offer some real upside.

It’s time we acknowledge these powerful artifacts for what they are, and pick up some extra copies accordingly. You never know when they may suddenly find a home.