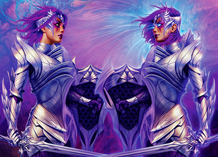 Supplemental products like Battlebond can be a great source of potential cards for Legacy and Vintage. Some of the cards in these products are simply too powerful to print in normal sets, which gives them a better shot at making the cut in eternal formats. During spoiler season and into release, the card that generated the most buzz from Battlebond was Brightling. The newest Morphling variant may be the best yet with its hyper-efficient cost of just three mana. 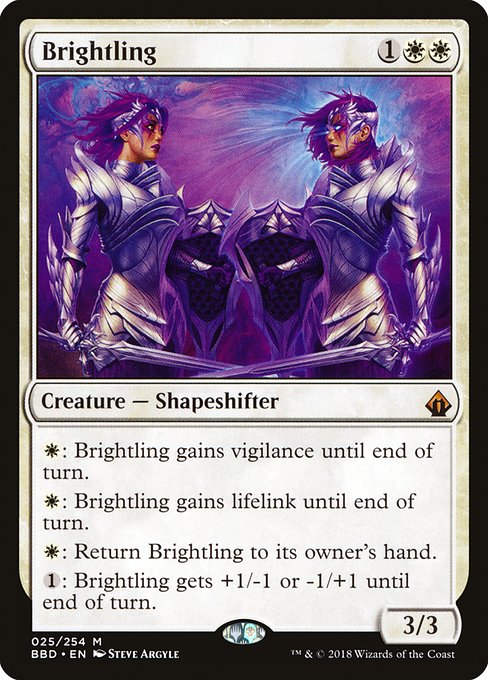 This buzz boiled over with the banning of Deathrite Shaman and Gitaxian Probe in Legacy. That was a tremendous win for Death and Taxes, the most obvious home for Brightling, and the card spiked from around $7 to $20. Its success this weekend at the SCG Legacy Classic (in the 2nd place UW Stoneblade deck) temporarily pushed the price past $30, although now it's available for under $25, and approaching $20.

One explanation I've read for the quick spike and subsequent drop is that the supply of Battlebond singles is low, due to low demand for playing with the product. That leaves a supply of sealed product to be opened now that it’s more valuable.

I expect even more product to be opened soon, since last weekend another card from the set broke out: Arcane Artisan. Legacy guru Bob Huang used it as a three-of in the sideboard of his Sneak and Show deck, even flexing it on camera in the Top 8 to an audience of thousands of stream viewers. 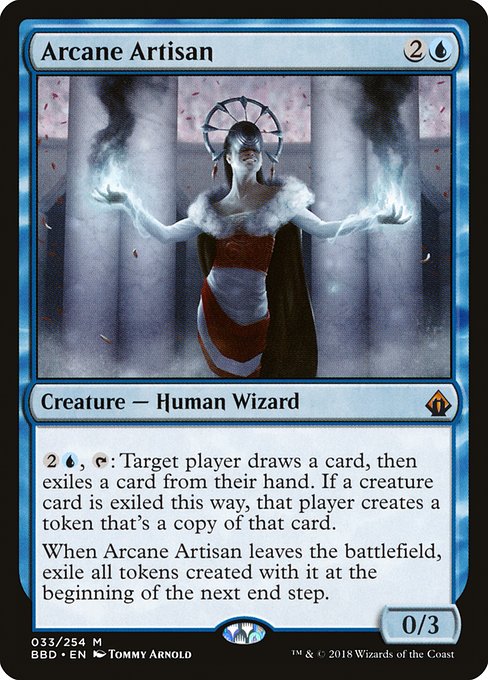 Available for under $3 over the weekend, Artisan spiked to nearly $20 by Monday, but now is a few dollars cheaper. Brightling is a strong card, but it seems more like a side dish than the main course of Arcane Artisan. Artisan is used in the sideboard as a way to dodge common hosers against the deck like Containment Priest and the new Mistcaller, in addition to Flusterstorm, Spell Pierce, and Sanctum Prelate. It also gives Sneak and Show extra ways to cheat creatures into play, and makes it more consistent overall.

I think it’s a new true staple for the deck—and it also appeals for the casual crowd—so I really like its long-term potential. The same goes for Brightling, which is widely accessible and attractive to a huge swath of casual and Commander players.

In the short term, I think the prices are going to fall as Battlebond is opened more, but once I sense it dries up and the price has bottomed out, I’d buy in. If you’re holding Battlebond product, now seems like a great time to open packs or try to move it at a premium. While I think the sealed product will hold well, especially for draft purposes, it's only a matter of time before some of its cards are reprinted, so it’s not all upside.

Some juicy details on Commander 2018 have been released. We now have the names, colors, and—most importantly—the themes of the four decks. The Commander product line has a history of being financial bombshells with repercussions for many cards, and there has already been some big speculation based on the little information we have.

These decks are tailor-made for reprints, so it’s really risky to actually move in on most specs before we see the spoiler, but there is one class of cards that can’t really miss: the Reserved List. Theme-relevant Reserved List cards that can be added to these off-the-shelf Commander decks are perfect candidates for being in high demand once they are released and players want to upgrade their decks. 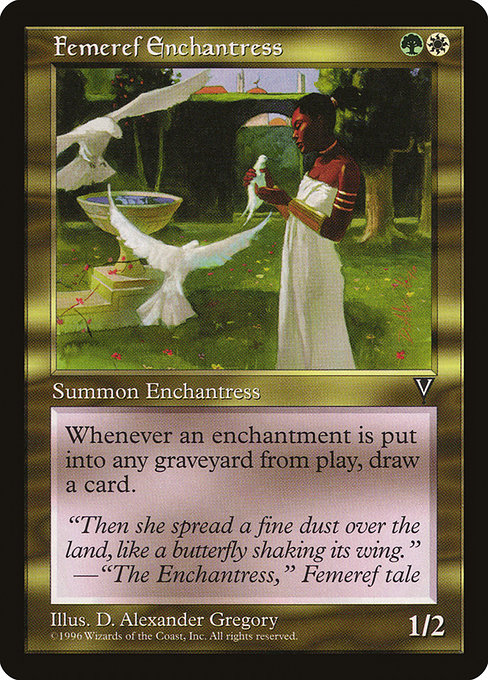 As such, Serra's Sanctum, an obvious card for the enchantment-themed Bant deck, has started to move up. Less obvious to most, but a great call by the players who bought it, is Femeref Enchantress. This is a perfect on-theme Reserved List card that could be right at home in the deck. It spiked from $6 to nearly $30 for mint copies, and is now available for just over $20. 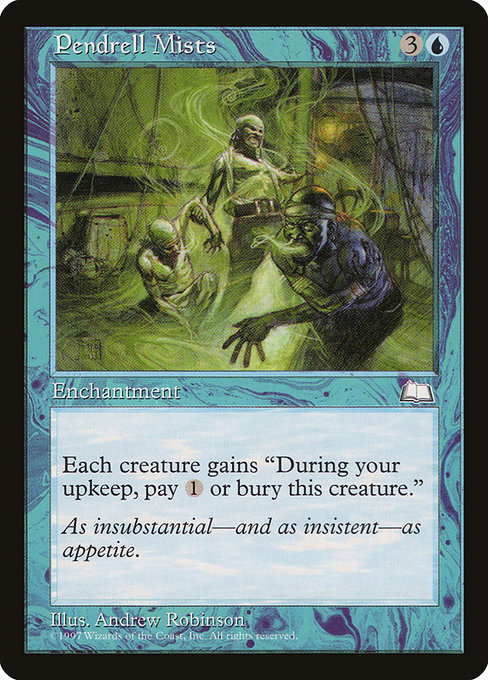 The deck also caused a spike in Pendrell Mists, notable as a cheaper version of The Tabernacle at Pendrell Vale. It went from $11 to around $30, and now sits under $25. 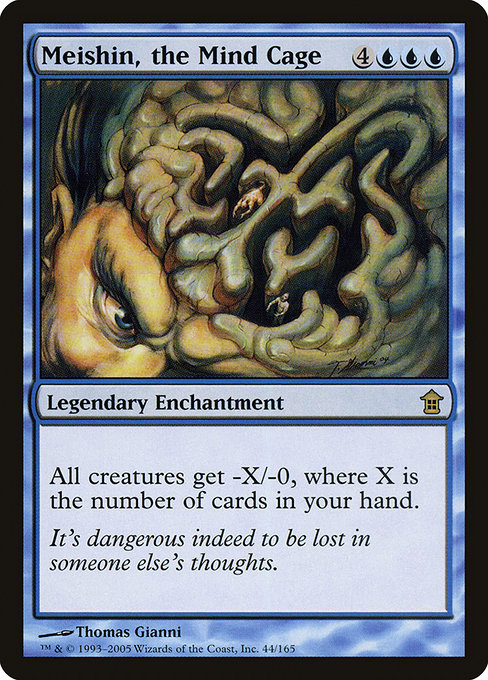 There has also been a spike in Meishin, the Mind Cage, an old Enduring Ideal staple and a strong card in an enchantment prison-style deck. This one went from under $2 to over $10.

If you have any ideas on Reserved List cards that might work in the deck, now would be a good time to act on them. What I can say is that Crucible of Worlds, which already seems like a strong spec once Core Set 2019 bottoms its price out, will become even more attractive. It’s presumably a great addition to the Jund land-themed deck, and likely won’t be reprinted again so soon. In this case I’d certainly wait to see the spoiler before doing anything rash, however, because it’s not out of the question we’ll see another reprint.

The other themes are UR Artifacts, with artifacts of course opening up a ton of great Reserved List cards. The Esper top-of-library themed deck is a bit tougher to figure out, but it sounds unique and could potentially bring some previously underappreciated cards to the forefront. I’m curious about the Commander, so look for anything that might synergize well with it.

I’ll be revisiting this topic in the future once we have more details.

The Return of Legacy Goblins 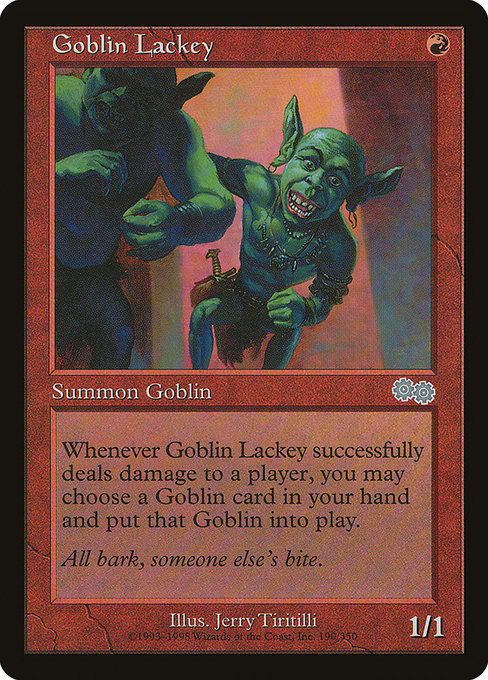 Goblin Lackey spiked this week in response to the news of Deathrite Shaman’s banning, which as a 1/2 blocker was the bane of the 1/1 Goblin. Goblins used to be a top-tier Legacy deck, playing a role similar to Death and Taxes's with Aether Vial, Rishadan Port, and Wasteland, and it could easily return to prominence.

It already has a big finish, with a Top 4 in the SCG Legacy Classic last weekend. That list showed off the strength of a new tool from Core Set 2019, Goblin Trashmaster. Trashmaster is a lord that doubles as a powerful artifact hoser in the maindeck that you can tutor up with Goblin Matron.

On that note, foil Goblin Trashmasters might be an attractive pickup in the long term, but I wouldn’t expect the crazy spike we sometimes see with Modern foils. I think Dark-Dweller Oracle also has a lot of potential, and I’d definitely experiment with one if I were playing Goblins. Any Legacy-playable Goblin should now be on your radar. They all should start seeing increased demand as more players move towards one of Magic's most iconic archetypes.