As summer comes to an end and rotation looms, Modern is the hottest format in Magic, but that hasn’t stopped one commander from breaking out!

Yuriko, the Tiger's Shadow has been the talk of the EDH community recently, and its price reflects high player interest as it is more than double the value of the next closest card from Commander 2018 (Treasure Nabber). While it is too early to say for sure, Yuriko, the Tiger's Shadow appears to be a hit from Commander 2018, so it is worth evaluating her supporting cast for potential specs.

Hiding in the Shadows

The key to making Yuriko, the Tiger's Shadow successful is creature evasion and dealing combat damage to opponents, but the harder part is having ninjas on the field capable of dealing the damage and taking advantage of her ability. A quick Gatherer search shows there have only ever been 10 other Commander-legal cards printed where the creature type includes ninja; clearly not enough to support an entire EDH deck centered around a ninja-based ability.

That’s where my first two picks come into the fold! 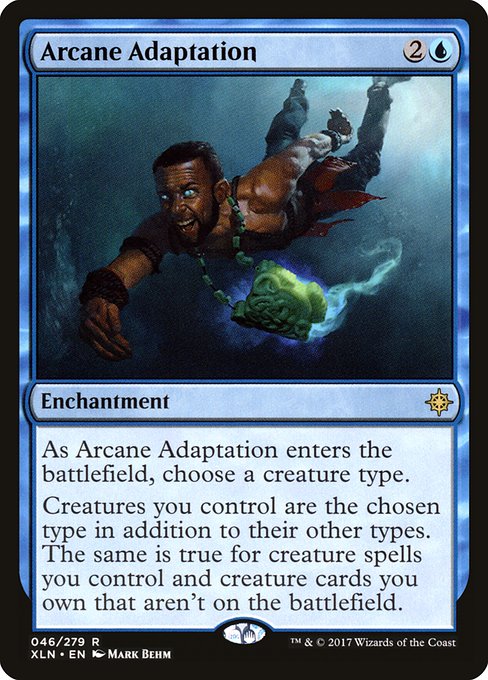 With the lack of support to fill a deck with ninjas, we need an alternative way of triggering Yuriko, the Tiger's Shadow. Turning other creatures into ninjas seems like a viable plan, and Conspiracy spiked a few days ago in response to this proposed strategy.

On a value-basis, both in real dollars and in playability, Arcane Adaptation is actually a superior card. The savings of two mana in casting cost and less restrictive mana requirements are both extremely helpful. Additionally, Arcane Adaptation allows creatures to retain their existing creature type while adding the type of your choice. While this isn’t a huge bonus, it could be a factor when filling in the rest of your non-ninja creatures (for example, merfolk or zombies could add a separate element of synergy to the build).

I personally love running creature-based Commander decks, so I will be grabbing a least one foil for myself at current prices ($3 at the time of this writing). The non-foils are in bulk status right now, which makes them a fantastic budget option.

I anticipate Arcane Adaptation having an immediate pop in the next few months as demand picks up and players look for alternatives to Conspiracy. I am targeting an exit point of $8 for foils and $2 for non-foils over the next 3-6 months, but I expect this will continue to lock in long-term gains for as long as it dodges a reprint. It will only get better with time as new creatures are printed. 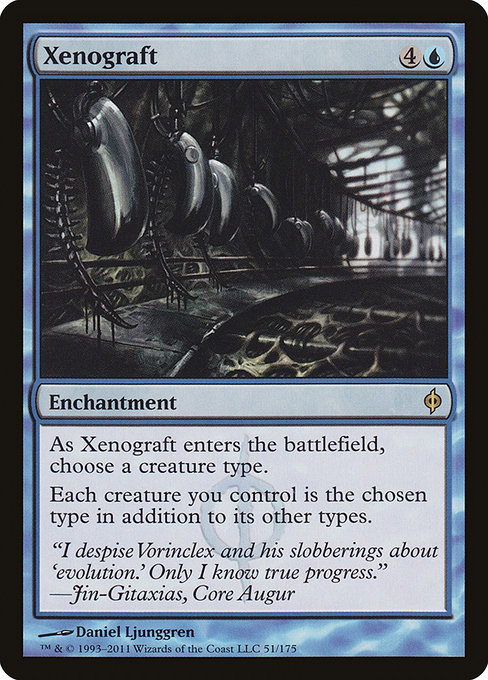 Unsurprisingly, Xenograft makes the list as a tertiary option for manipulating creature types to give us access to more ninjas! The card is a bit narrower than that of Arcane Adaptation because Xenograft only impacts creatures on the battlefield, but fortunately, more ninjas is all Yuriko, the Tiger's Shadow wants! The CMC of five is actually beneficial, too, if you happen to top-deck it with Yuriko's ability.

With a single print at rare from New Phyrexia, this card is poised to spike with newfound demand from Yuriko (see: Triumph of the Hordes). Xenograft foils are mostly sold out on the internet at the time of this writing, but non-foils are priced just above bulk and should be able to jump into the $3 range as Yuriko, the Tiger's Shadow gains in popularity.

Similar to Arcane Adaptation, I plan to grab a foil Xenograft for my personal collection. I also pulled several non-foils from my bulk in anticipation of increasing demand.

I mentioned Triumph of the Hordes because it is another card from New Phyrexia that sees virtually all of its play in commander and casual games. According to EDHREC, Triumph of the Hordes is in roughly 8,000 decks and non-foils sell for $8 consistently (as an aside, wow to both the number of decks and the price on Triumph!). The key difference is rarity in this comparison; with Triumph of the Hordes at uncommon, there is more supply available than Xenograft at rare. It is notable that Xenograft is already in 1,200 decks on EDHREC, so even just a little movement north will take the price out of bulk.

This makes for an imperfect comparison, but it does demonstrate how expensive cards from New Phyrexia (without a reprint) can get on the back of EDH-only demand. If Xenograft finds its way into a few hundred more EDH decks over the next six months because of Yuriko, the supply will get constrained and it could easily move to $3 or more.

You could do worse than to spec on a handful of Xenograft out of bulk boxes or grabbing a few off the internet. If you can find foils at or under $5 at your LGS still I recommend snap buying those as well. 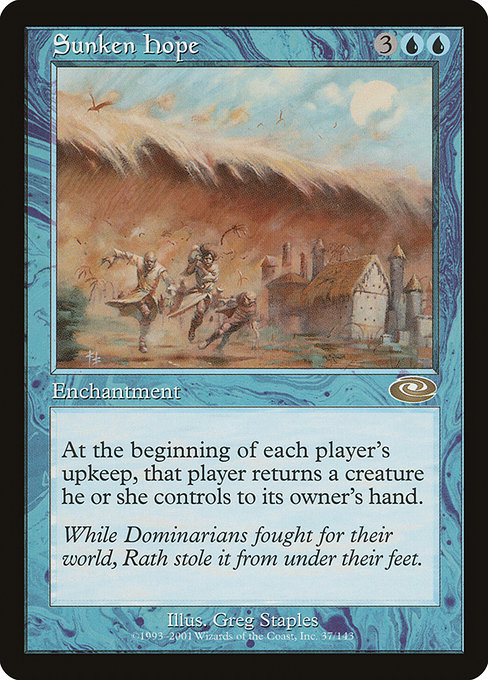 This strategy can backfire with enemy ETB triggers and token strategies, but with the potency of blue and black, you should be able to pack ample removal like Counterspell and Doom Blade to deal with the dangerous threats on the board or as they enter it.

With Sunken Hope being a perfect way to consistently trigger ninjutsu when landing combat damage to players, I expect this to really gain traction in any Yuriko, the Tiger's Shadow strategy. Additionally, at five CMC, it makes for a nice hit off the top with Yuriko's ability!

Sunken Hope foils were both done using the original foiling process (Planeshift and 10th Edition) which will make them hot commodities if the strategy pans out. As a result, foils will be harder to find, especially in NM condition. I expect Sunken Hope foils from both sets to reach $10 over the next few months, and I could see the Planeshift version commanding a higher premium due to its visual appeal and being a very small print run. I'm not keen on recommending non-foils as a spec because of the reprints in two Planechase sets.

Finally, let’s talk about a non-ninja creature that is all-but-guaranteed to be included in every Yuriko, the Tiger's Shadow deck remembering the marquee characteristic for any Yuriko creature is evasion. 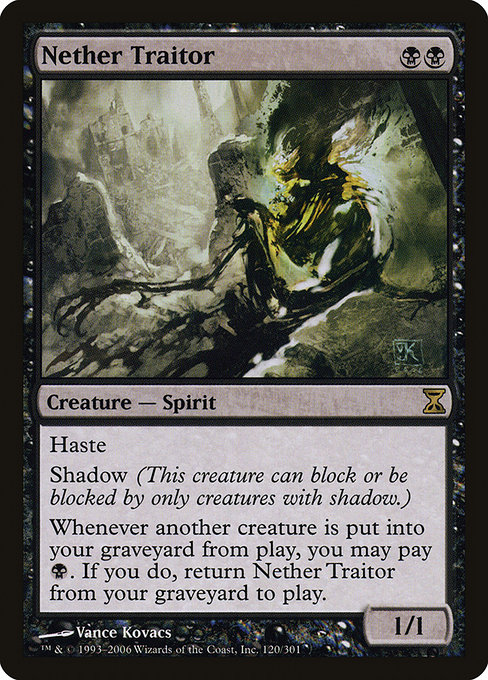 Nether Traitor has a single-print from Time Spiral and makes the cut because of shadow, an older evasion ability that is very powerful because it can only be blocked by other cards with shadow. As a result, Nether Traitor is virtually unblockable and a fantastic way to trigger ninjutsu for Yuriko, the Tiger's Shadow. On top of that, it has two additional abilities which are gravy: haste and built-in recursion (which makes it very tough to deal with).

Because of the single-print in Time Spiral, Nether Traitor foils have already jumped from the $8-10 price range to $20 on TCGPlayer. There are a handful of LP copies available on eBay under $15 still as of this writing, but generally speaking, this will become a very difficult foil to find. If you want a foil copy, I recommend grabbing one of the few left on eBay or grabbing one of the sub-$10 HP copies on TCGPlayer. The non-foils are very attractive at current prices and could easily see a double-up from $5 to $10+ as supply is tested.

As always, please feel free to comment with feedback, your likes/dislikes, cards I may have missed, or questions. I am always up for talking about Magic! You can also find me on Twitter where I love to post random tips, trends, spec ideas, and just generally have good banter.