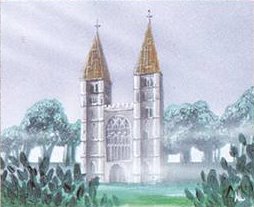 In a way, August has been a month of personal introspection. I’ll admit I tend to be close-minded to new ideas on certain vectors. When it comes to topics regarding politics and the economy, I try to consider all angles while discussing facts from both sides—in this area I’d maintain I am quite considerate to most sides of the debate. However in areas of personal interest and hobbies, I am most rigid in my thinking.

I’m doing my best to rise above such philistine thoughts. For example, I’ve begun expanding my movie watching habits to include films I once avoided. Rather than embarrass myself by listing specifics, just trust me when I say I have done myself a disservice avoiding certain classics. The same can be said with books, and I’ve recently begun expanding my horizons when it comes to the works of fiction I listen to (on my phone) and read.

Perhaps most significantly, I’ve broadened my horizons when it comes to decisions regarding personal finance. This is one of the hardest areas for me to show flexibility in, but a few recent decisions have really expanded my views on the taboo subject that is money.

Why do I mention these personal matters in an MTG finance article? It is my recent open-mindedness that has helped me improve my perspective on life. I was pigeonholing myself into a narrow box, but now I feel the expansive horizons in front of me offer significant potential. So I ask you, the reader: are there areas in Magic where you have been more close-minded? Are there opportunities you haven't been taking advantage of because of resistance to change?

This week I want to share five MTG finance must-dos, and I ask that you please keep an open mind to each of them even if they involve shopping habits outside of your comfort zone. You never know what’s out there until you embrace change.

In recent weeks I’ve touched upon ABUGames’s aggressive store credit offers on various Old School cards. While their sell prices are equally high, I still see plenty of opportunity for value trading with the Idaho-based vendor. For example, I recently traded in a stack of played Alpha commons and uncommons (nothing of note) for a played English The Tabernacle at Pendrell Vale.

However, the most exciting pick-up I’ve gotten from ABUGames in trade is an Alpha Mind Twist. This card had been on my want list for a while now, but copies are pretty much gone from the internet these days. After all, Wizards only printed 1100 of them 25 years ago.

Once I saw that ABUGames had restocked a copy, I knew I had to grab it. But I had a moment of panic—what would I trade in to ABUGames in order to acquire the rarity? I certainly wasn’t going to pay cash for it! I was at work when I noticed the card was listed for sale, so there was no way I could get home and submit a buylist for at least a few hours.

This is where the reservation of cards is so handy. When you add a card to your cart, you can select an alternative payment method called “Will Be Sending in Buylist (Trade Pending).”

What a blessing! You can order a card without paying a dime, essentially reserving it until you have enough store credit saved up to pay for it! I don’t know how long the grace period is, but I’ve had cards on reserve like this for multiple weeks. It’s a great way to reserve a card before someone else buys it until you can get your ducks in a row and submit a buylist to pay for the card. If you’re not using this option today, I highly recommend trying it out.

I’ve been a member of eBay for around 14 years, and as such I have a pretty long history with the website. When they invited me to join a new program called “eBay Bucks,” free of charge, where I’d essentially get eBay credit the more I spent using the site, I knew this was to be a valuable opportunity. Since joining I’ve netted hundreds of dollars of “cash back” thanks to this generous program.

Nowadays, I believe anyone can sign up for the eBay Bucks program. The FAQ portion below indicates who is eligible. 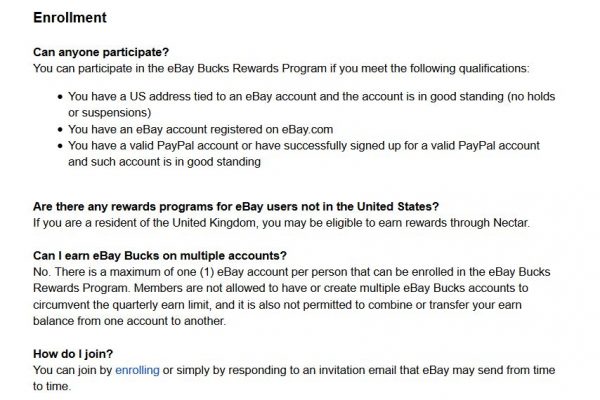 It looks like you have to have a US address and a valid PayPal account in good standing in order to reap the benefits of this program. If you meet these prerequisites, and you’re not participating in the eBay Bucks program, I’d strongly recommend you rectify that immediately—you are leaving free money on the table. The best part is that Magic cards are as liquid as cash, so getting “cash back” on MTG purchases is essentially free money!

I’ve mentioned this website in the past, but I suspect many readers still don’t use Card Shark to purchase their cards. This site has been around a long time, but it was recently overhauled to offer a much better user experience. Because many people still don’t shop here, you can sometimes find some great deals even after a buyout occurs. For some reason, Card Shark is a little slower to sell out of hot new cards.

Card Shark also has great buyer protection so you can purchase with confidence. Plus, they have a program called “Shark Shares”—you basically get points with every purchase, and after a while you can redeem these points for free booster packs. It takes a while to accumulate enough points, I’ll admit, but it is essentially a free bonus.

One of my favorite features is the easy sorting functions on the site. 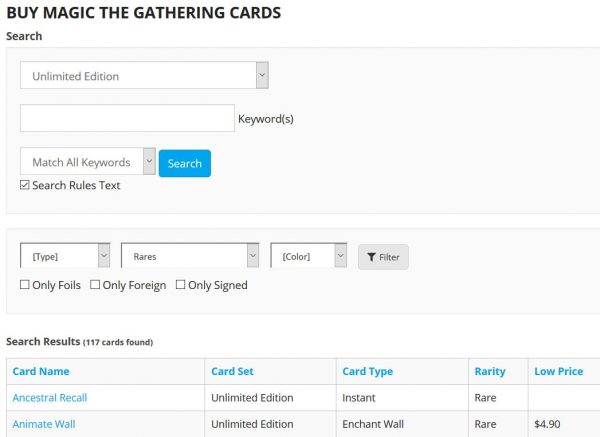 I’ve used this sorting feature multiple times to browse for underpriced copies of a card of a given rarity and particular set. The more obscure the set, the more likely you can find some steals. Not long ago I noticed there were a bunch of Collectors’ Edition cards below buylist, and I suspect some Unlimited cards in stock are priced attractively given the recent run on cards from that set. Check it out—it costs nothing to sign up and browse!

Must-do #4: Hareruya Isn’t the Only Arbitrage Game in Town

When I initially began shopping for arbitrage from Japan, I relied heavily upon Hareruya. The site has a great interface for international residents. However they aren’t the only Japanese vendor that provides an international interface for English-speaking shoppers. Tokyo MTG has an English site, a great selection, and inexpensive options for U.S. shipping. They also have a convenient option to display prices in alternate currencies so you don’t have to keep doing the conversion math yourself. 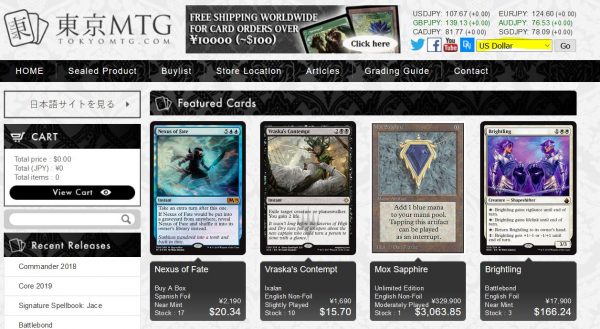 As price spikes occurred from Old School demand in the U.S. and Europe, I’ve found some great bargains on Tokyo MTG. Most recently I purchased some CE/IE cards that were buylisting for more in the U.S. It really depends on where the supply and demand lie. But one thing is for sure: if you’re trying to leverage Japanese arbitrage, do yourself a favor and check out Tokyo MTG in addition to the other shops you’re used to browsing. You never know what you’ll turn up!

If you have a subscription to Quiet Speculation but aren’t participating in the Discord, you are leaving money on the table. The community there has given me numerous ideas for speculation that have led to appreciable profits. There’s also engaging discussion on counterfeits, pricing, trading opportunities, and even sale reporting. Want to know what other Insiders are moving and at what price? The Discord is the place to be! 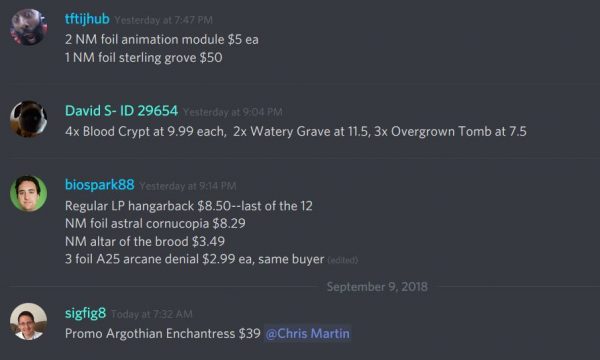 In addition to all the community discussion, we’re always looking for new ways to deliver value to our Insiders. Edward Eng (author of the popular Hold’em & Fold’em series) and I are currently planning an Office Hours event: it’ll be an open forum where Edward and I connect our microphones and answer questions from the community, live!

The first such event is currently scheduled for Thursday, September 27th at 9pm Eastern Time. Have a question about a spec idea or the value of a card? Come join us at the Office Hours and ask away! If successful, we’re going to explore making this a monthly occurrence so that Insiders can have more reliable access to QS’s staff. It should be a lot of fun so make sure you sign up for the Discord to take advantage!

Maybe you’re already doing all five of these things. Maybe you’ve done none! Wherever you are on the continuum, I’d encourage you to always keep an open mind. I haven’t been successful at that in all aspects of my life, but I’m trying my best to improve. I’m trying to say “yes” first when trying something new rather than defaulting to “no” because it isn’t what I’m used to.

In some areas of life, such as movies and books, I am merely missing out on some engagingly entertaining experiences. However if we are close-minded in the realm of MTG finance, we could be leaving money on the table.

There are tons of unique ways to engage with the financial aspect of the hobby, and I hope sharing these five ideas broadened your horizon a little bit more. Try a new site out. Try signing up for the Quiet Speculation Insider Discord, even if just for one month. And try leveraging a store’s service that you’ve never used before, just once to see what it’s like. You never know what value you may unlock in doing so. The upside potential certainly merits stepping outside of your comfort zone to explore the unknown!

3 thoughts on “Unlocked: Five MTG Finance Tips You Should Consider”