Achievement unlocked! I've been writing for Quiet Speculation for ten weeks now. It's been an immense pleasure interacting with many of you in the community and having in-depth discussions about a wide variety of topics.

I started writing for QS with the intention of creating market-watch articles and discussing how to make picks based on current trends. With ten weeks under my belt, I think now is an appropriate time to start reviewing my picks and taking inventory.

My first pick was Stoneforge Mystic, and I think I called this one fairly well. This card was periodically spiking and dropping due to recurrent B&R announcements, but I noticed a net gain almost every time this happened.

As you can see, it's still following this pattern. I'm currently sitting on a few of these myself and pretty happy with the growth. All I can do is hope they dodge a reprint at rare in Modern Horizons. The potential for cards that were never legal in Modern to appear in Modern Horizons is there, but its current playability in Legacy gives a bit of bad-luck protection either way. 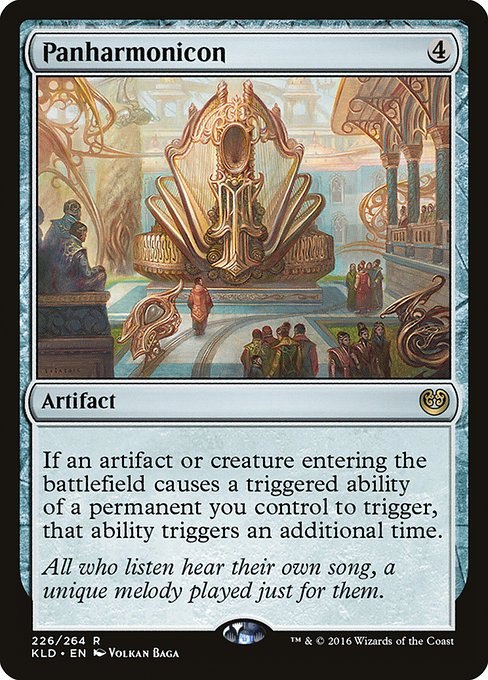 From my second article, I outlined the cards in Kaladesh that I thought were going to be significant players in the long term, so anything I mentioned there will still need some time to pop.

I still believe Panharmonicon was the most important card of the set for its Commander playability. Foil copies are the play here, and I believe they'll be a smart pickup under the $20 mark. Non-foils have the same potential for growth, but I fear that there's a good chance we could see a reprint in a supplementary set as early as this year.

When the first bit of information was released on War of the Spark, I knew that cards like Deploy the Gatewatch would be significant spec opportunities in the very near future. I was fortunate enough to pick up a small stash of these under the dollar mark, but the ship on that has mostly sailed.

Many buylists have adopted the new adjusted price of around $5, and are willing to buy them up on a tight margin, as a few folks in our Insider Discord pointed out to me this week. If you got in at the ground floor and have some stocked up, I think now is a perfectly acceptable time to get out of these to free up money for other opportunities. The same goes for Oath of Nissa, Call the Gatewatch, and any other cards in this class.

As Arclight Phoenix rose to power in Modern, I was beginning to feel like I was talking about it every week. It just kept growing and growing, and I was almost sure that they were a safe hold until the last few months of their legality in Standard. I had picked up several playsets of these at the beginning of Guilds of Ravnica Standard, when the card was well under $10. When the deck first saw some success, the price went up a bit, and I was happy to out all the copies I had for a few bucks' profit.

I never expected that the card would completely take over Modern. Less than a month later the price skyrocketed to around $30 a copy, sold out at most major retailers. It even continued to grow from there, as it took down Top 8 after Top 8 at the premier level. As a chase mythic that was undoubtedly helping to sell Guilds of Ravnica booster packs, I never would have guessed that it would be reprinted so soon.

As we now know, the Challenger Decks this year included a single copy in the Izzet deck Arcane Tempo. The announcement of the finalized decklists has already sent the price on a downward trend, which will only keep going as players are able to flip these decks for value on buylists.

I definitely was wrong about this one nearly every step of the way, and the card's presence in such a product shattered my previously held expectations. You win some, you lose some. The lesson I learned here is that I should hold a few copies when selling into a spike, just in case. I don't regret selling into the first spike, but I wholly regret not having any copies to sell into the next one. 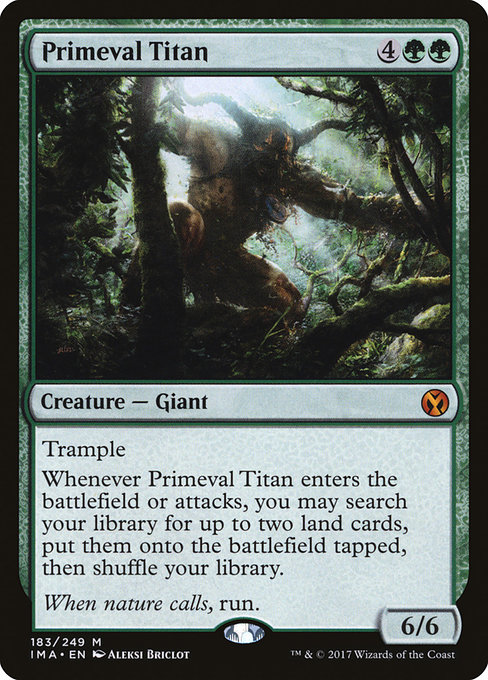 One of my more recent picks I've been interested in is Primeval Titan. It's got a lot going for it in the way of viability in Modern, where it sees play in RG Valakut and Amulet Titan. Some successful finishes have driven a small increase in price over the past week.

There are four relevant printings of this card—Magic 2011, Magic 2012, Modern Masters 2015, and Iconic Masters—but all of them have been at mythic rare. Though the expected buy-in is already around $10 a copy, I imagine it won't take much for this card to double in price, making it an okay price point for entry. As Prime Time decks become more equipped to fight Arclight Phoenix and Death's Shadow strategies, it will only lead to upward price movement.

As a side note, I attached Scapeshift to this same trajectory, and I feel that their prices will be fairly lock-step in the future. I would lean towards holding onto these in the future.

To close us out here, I'd like to outline my oddball picks that saw a little bit of movement. I wouldn't call these wins, but I wouldn't count them as losses either. My number one rule with cards like these is to out them as soon as a decent profit is available, although I'll be holding a copy or two just in case. I always try to keep this in mind—you didn't make money if you didn't sell the card. 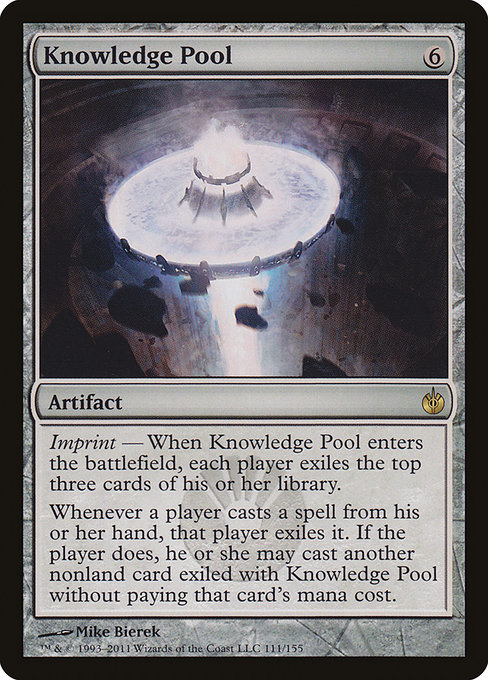 Knowledge Pool was a call I made in response to Teferi, Time Raveler being spoiled, and I wasn't alone in speculating on this card. There was quite a run on these at the sub-$1 price, and I was happy to get all the copies I currently have. I truly wish I had gone in on foils instead, but I'll probably make out okay here.

I'm willing to bet that people will start exploring the Teferi Knowledge Pool deck again in Modern, regardless of whether or not it's a successful strategy. This will drive many buylists to adjust to the new price, providing an outlet for copies you may be holding. 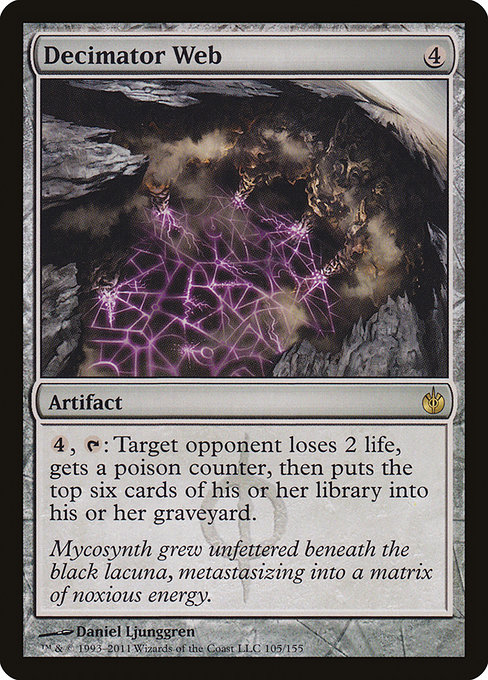 When Atraxa, Praetors' Voice was bought out on PAX weekend, I immediately started combing Gatherer for cards that may still be flying under the radar. Many pointed to Inexorable Tide, which I was pretty supportive of, but my underdog pick was Decimator Web in foil.

Being able to apply infect counters without doing combat damage, along with the other mean effects this card has upon activation, struck me as casual gold. Admittedly, my experience of having this card played against me in a friend's Atraxa deck led me to pick up some copies, but it appears that others have had a similar experience, as the card is listing a bit higher than the weeks previous.

Watching the Modern metagame evolve every week influenced this one. I noticed a lot of Humans lists starting to adopt Anafenza, the Foremost in order to stand up to the graveyard menaces in Arclight Phoenix and Dredge strategies.

I recognize that there are a ton of these out there, and it will take a lot more tournament success to cause a buyout. However, I think there's a bit more room for growth here. Many suspect that Faithless Looting and Ancient Stirrings are on the chopping block for the next B&R announcement. If these were banned, I'm pretty confident that Humans would become the premier aggro strategy once again. 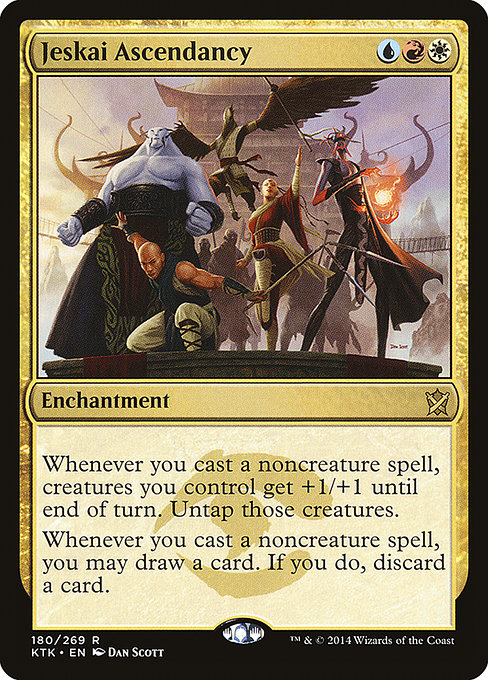 The last pick which I haven't seen too much movement on was Jeskai Ascendancy. I haven't had a good chance to write about it yet, but I believe this strategy could come back into favor in Modern, especially if we get more potent cantrips in Modern Horizons.

Fatestitcher is another key piece of the strategy, and I'll be looking at picking up many more copies of both going into the summer. LSV recently recorded a moderately successful league with the deck, and I'm pretty hyped about the deck, at least from a play perspective.

I'm pretty happy with my successes here. With War of the Spark spoilers coming to an end this week, I'll be watching closely for any new items to go in on.

The biggest leg up for me on most of these picks was the Insider Discord, where I was able to discuss some of my picks as I was adding them to my cart, and ultimately get to the checkout screen. As well, if anyone reading this out there would like to brainstorm ideas, you can always reach out to me on social media or leave a comment below!