The time has come to start rolling out the results of my latest foray into the Modern banlist. In the past, the return of this series was hailed with a public vote for which card I'd work on, followed by months of silence while I actually did the work. This time, extenuating circumstances dictated the card, so I never announced anything. Surprise? 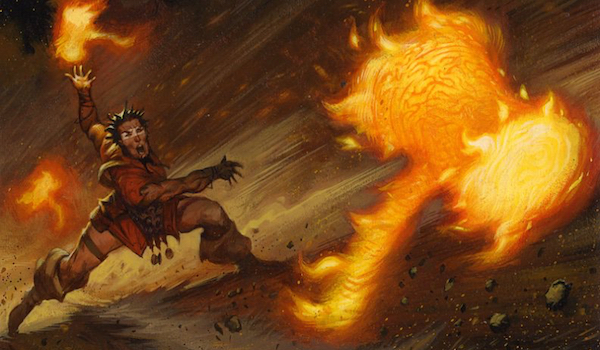 For those new to this series, I periodically take a card from the Modern Banned and Restricted List, slot it into the current version of the deck that got it banned in the first place (if possible), then run it through a gauntlet of decks alongside a stock list (serving as the experimental control) to see what impact it might have on Modern if legalized. The intention is to see if the reasons for it being banned are still valid, and what its power level could be in an updated model. I have previously tested Stoneforge Mystic, Jace, the Mind Sculptor, Preordain, Bloodbraid Elf, and Green Sun's Zenith. This time, I tested Punishing Fire.

If my testing Punishing Fire comes as a surprise to you, know that it was to me, too. Back when I started doing these tests, I specifically said that I wouldn't test Fire; Jund was a Tier 1 deck. Given that the other testing options were either cards that had never been in Modern, had more applications, or simply seemed more interesting, the opportunity cost of testing a card that would slot right into Jund and little else was too high to consider it a viable candidate. There was also the fact that I remembered its time in Modern and had no interest in reliving those grindy, grindy days. 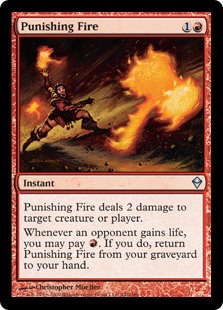 What changed my mind? Nothing. I'd have rather tested anything besides Punishing Fire for the aforementioned reasons. The fact that Bloodbraid Elf got tested, unbanned, and hasn't done much changed nothing for me: I don't see value in testing Jund cards. Particularly ones that exist only to infinitely grind. I've also seen and played against it in Legacy since then, and I can't stand the gameplay it creates. Second Sunrise and Sensei's Diving Top are banned because they drag games out, and based on my experience, so does Fire.

However, the Grixis Death's Shadow player who's worked most of my tests really wanted me to test Fire. At heart, the man's a Jund devotee (he also piloted Jund in the early tests), and only ever played GDS because he felt he had to back in 2017. He very strongly wants Jund to be The Deck again and thinks Fire is the key. I don't agree; there's nothing wrong with the deck, it's the metagame that's against him. However, he's been asking me to test Fire for years now, and finally called in all his work on the project as favors to make me test it. And so, begrudgingly, I got to work.

The Banning in Context

Much like Green Sun's Zenith, Punishing Fire was briefly legal in Modern. Modern was first proposed in May 2011, and was debuted that September. Zenith and many other cards were banned immediately afterward. Fire survived until December 2011, when it and Wild Nacatl were banned following dominating performances at Worlds. Wizards justified their decision as follows:

We also have the goal of maintaining a diverse format. While there were aggressive decks, control decks, attrition decks, and combination decks that succeeded, the diversity was not ideal. In particular, the heavy majority of all aggressive decks were "Zoo" decks.

Basically, Zoo packing Nacatl and Fire was the only real creature deck at Worlds. Jund was also rocking the combo of Punishing Fire and Grove of the Burnwillows. The state of creatures at the time meant that anything cheap was just dead to Fire and weaker than Nacatl, so they were removed to allow more creature decks to exist. They were considered too good for their day, though ironically, Nacatl doesn't see play anymore.

A Place in Legacy

Since then, Fire has seen considerable play in Legacy as an intrinsic and potent part of Legacy Jund, though Jund itself has been steadily declining. It's still powerful, and Jund can wreck the unprepared, but in Legacy, Jund-style attrition is done better by Grixis decks. 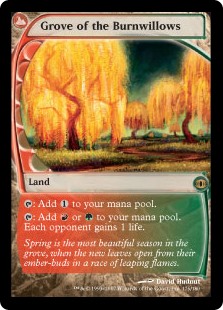 Another Legacy home for the card is Lands, a prison deck that abuses Life from the Loam, various anti-creature lands, and Punishing Fire to shut down creature decks. Against everything else, it either loops Wasteland until opponents concede or combos them out with Dark Depths/Thespian's Stage.

Lands is a frustrating deck to play against in general, since most of its lock pieces are hard-to-interact-with lands (hence the name). However, the Fire/Grove combo is the worst, because it is incredibly slow, yet inexorable. The game isn't ever really over, and yet so few cards matter anymore that the frustration gets overpowering. Dealing a net one damage per turn is also akin to water torture. Finally, Grove's lifegain is a mana ability trigger, so it's a return of the rules headaches of Krark-Clan Ironworks.

I was always going to test Fire in Jund. Jund was seconday compared to Zoo for getting Fire banned, but there's nothing comparable to Zoo anymore, so it wouldn't work as the test deck. It was also really tempting to just copy a 2011 Worlds decklist and go get lunch. However, Modern is a very different format today than it was back then, and those lists just aren't very good anymore. Anyone up for maindeck Thrun, the Last Troll and 26 lands?

Trying to modify a contemporary Modern deck to fit Fire also proved quite tricky. I could just awkwardly force in my test cards, but I want to use a list that would make actual sense if the card were legal. I ended up using Legacy decks as my guide for the manabase in the test deck and picking the more versatile removal. The control Jund deck is completely stock.

I had to cut a lot of one-drop interaction to make Fire fit. Assassin's Trophy stayed because it was more versatile against more decks. I consulted with the guy responsible for this test on the list, and based on his sideboarding recommendations, I replaced a maindeck Thoughtseize with a sideboard Duress. He only kept Thoughtseize in against control and combo decks, so if I'm going to side one in against those decks, Duress does the same job without hurting me.

As always, the testing gauntlet was chosen from decks doing well at the time the test began. This means that every deck comes from mid-to-late October 2018. This may surprise observant readers since I hadn't reported the Green Sun's Zenith test results then. I normally wait several months to recover between tests. However, the favors were called in at the end of September, and I had to get moving. As usual, I picked players I knew who were available for hours of testing via Skype calls and played the decks I wanted to test against. They used their own lists.

I've always tried to have a wide spread of decks representing as many archetypes and playstyles as possible. Thus, I was always going to have UW Control. There was some debate over including Tron. Space in the gauntlet is limited, and Dredge being a huge boogeyman back then made a compelling argument. However, Tron is a known bad matchup for Jund across time and format fluctuations, so finding out how a new addition affects the matchup is always useful.

The choice of which creature decks to run was easy in a rather hard way. I was always going to run two because the a priori assumption is that Fire is only impactful in those matchups. There were some obvious choices, but I didn't know if they were the best choices.

Last October, when I was putting together the gauntlet and getting the testing moving, Bant Spirits was the creature deck of choice. It had been doing well over the summer and 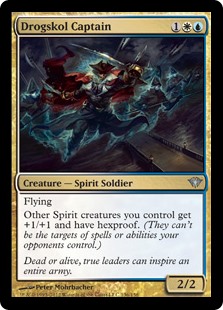 continued to do so into fall so it would be the obvious inclusion. However, it's also a deck that I wouldn't expect Fire to have much effect against because of hexproof. This is a valid problem with Fire, so it's fine to include Spirits, but I needed another deck more in line with the decks from back in 2012 so I could see if the cited problem persisted.

Arclight Phoenix was a newcomer and while it had started making itself known back then, it wasn't clear that it would become the force that we now know it is. Therefore, I didn't test Izzet Phoenix. Dredge was also a consideration.

The obvious choice for a more traditional creature deck was Humans. Logically, it would be very vulnerable, since most of its creatures have 2 toughness or less and Meddling Mage gets overwhelmed by Jund's removal variety. However, it wasn't a very sucessful or popular deck at the time, because it wasn't as well-positioned as Spirits. Elves was the other option, with similar attractiveness for the test, though it's not a popular or successful Modern archetype. The decision was made when the Humans player immediately joined in when asked while the other pilots were still deciding.

Finally, my combo deck is Ironworks. Storm is my usual choice, but that didn't make sense this time. Neither it nor any other non-Ironworks combo decks were doing that well last October. Also, I had finally found someone who knew Ironworks well enough and was willing to test with me, so it was time to bring in the smelter.

I'll be honest, this test wasn't enjoyable for me. I didn't like how Fire made me play, or many of the games that resulted. However, I still carried out the full test with as open a mind as I could, and tried to show that it would be fine in Modern, as I always do. Check back next week to see how that went.