I came across a post on the mtgfinance subreddit about speculating on bargain Modern Horizons cards for the long-term - the theory is that supply of these cards hit their peak supply after Grand Prix Vegas, at which point focus started shifting towards Commander 2019 decks and Throne of Eldraine. With supply bloated, prices have sunk and look to have bottomed-out. With no new supply coming, prices should increase as the player base grows and demand increases. It all sounds nice in theory, and people shared all sorts of ideas on what cards to target. After digging deeper I’m not so confident in the premise.

I decided to use QuietSpeculation’s Trader Tools to take a look at buylist prices and to get an idea of how these cards are performing in the market, and they paint a picture of very bloated supply. The spread numbers on the cards are very high, with buylists offering low numbers compared to what they are selling for. For example, the price of the top-upvoted recommendation in the thread, Unsettled Mariner, a surefire cross-archetype staple over the long-term, retails for about $1.50, but buylists for just $0.75.  It gives me the sense that these retail prices could fall further still as stores try to unload their bloated inventories. It also seems like supply is so high that it will require massive increases in demand to meaningfully increase of these most bargain cards, so any speculation would have to be done on a truly long-term time frame. 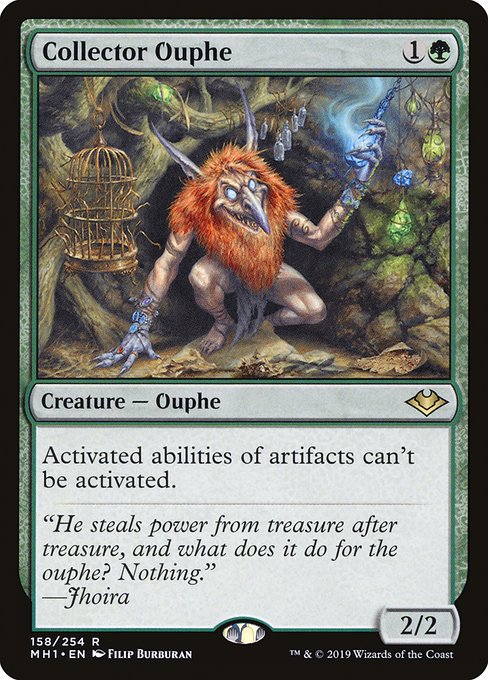 The Modern Horizons card with the lowest spread is currently Collector Ouphe at 33%, which buylists for $3 but can be bought for $3.50-$4. This smaller spread means it has much better legs to stand on as a good spec. It has a great appeal across formats as one of the best hosers in the game, so its future prospects look great.

This buylist-focused approach to speculation got me looking at other sets, and I was blown away by the prices of Core Set 2020, which looks very different thanModern Horizons. Its spreads are very low, and at the time of writing, it even has multiple negative spreads that offer arbitrage opportunities. 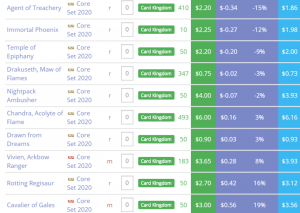 These spread numbers are based on the TCGPlayer Mid price, so in reality, these cards can be had even cheaper and the spreads are even smaller. Numbers like 3% are actually on the negative side. It’s rare to see so much demand from such a recent set, and it points to the fact that Core Set 2020 was severely under-opened. It came right before the release of Commander 2019 decks, and after the exciting Modern Horizons, which made the core set release seem even more lackluster than usual.

Events like Grand Prix Vegas using Modern Horizons instead of Core Set 2020, which was released a month prior, is perfect evidence of the core set’s reduced importance being even further diminished.  Yet, it was actually quite a powerful set, putting multiple staples like Elvish Reclaimer and Mystic Forge immediately making it in Legacy, and currently dominating Standard with cards like Field of the Dead and Golos, Tireless Pilgrim. Buylist prices also paint the picture of a set with high casual appeal, which helps to explain the high buylist price for cards like Drakuseth, Maw of Flames and Chandra, Acolyte of Flames. 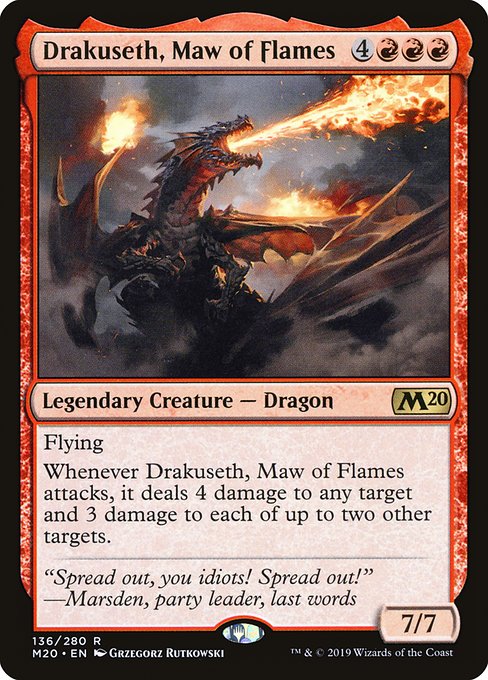 There really isn’t much Core Set 2020 being opened anymore except by those cracking for singles, but demand is only going to increase, with the set still having a year left in Standard, and especially for the most playable Eternal and casual cards. I see the stage set for significant price increases in the coming months as Core Set 2020 is farther and farther back in the rearview mirror, so I like taking any opportunity to buy in on these cards for a good price with an eye towards significant gains next year. 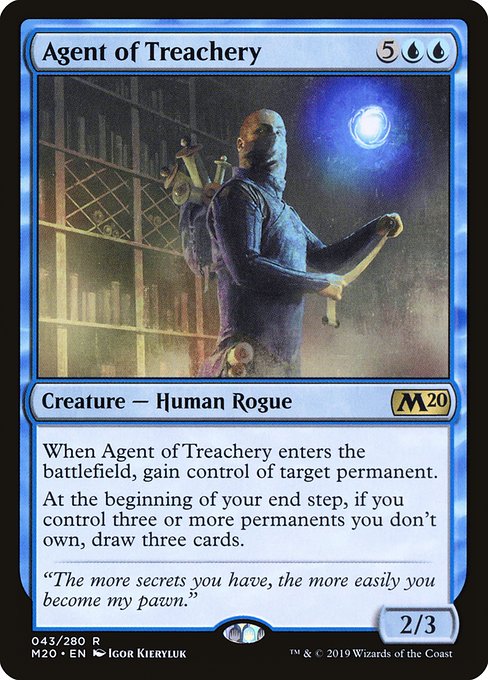 The card with the lowest spread is Agent of Treachery, which makes sense to me as it is seeing play in Standard's top deck and has huge casual appeal. With a Standard ban of Field of the Dead looking inevitable, players will be looking to alternative late-game tools like Agent of Treachery, so its fortunes might further improve there into next year,  and its long-term casual prospects look great. 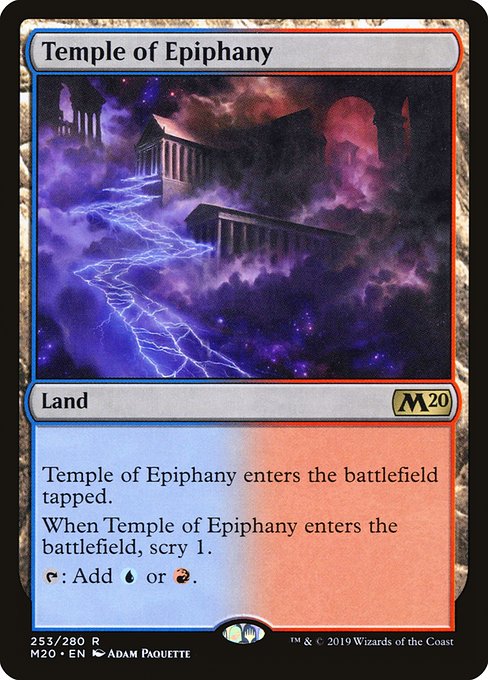 Temple of Epiphany seeing such robust demand makes sense given it’s a Standard staple with casual appeal. What’s telling is that the price of the original printing fell very little after the printing, from around $3.30 to $2.40, and is already heading back up. The rest of the cycle tells a similar story, and I think that gives them all a strong foundation as a spec. 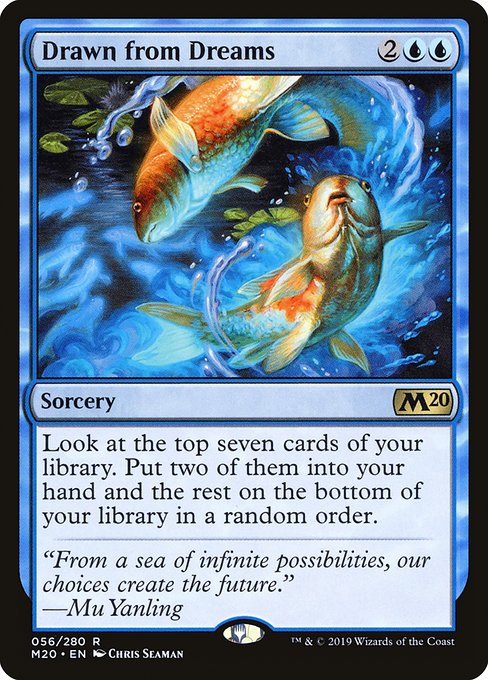 Drawn from Dreams is a truly powerful card, a fixed version of the Modern and Legacy banned Dig Through Time. It’s not seeing a ton of play in Standard, but it gained a major boost from Fires of Invention, which it's being used in combination with as up to a 4-of. With a ban looming players are going to look towards the next most powerful strategies, and surely Fires of Invention is on the shortlist of things the pros will be trying to break for the Mythic Championship next month. Its price is up nearly 25% from Throne of Eldraine release and about to crack $1. 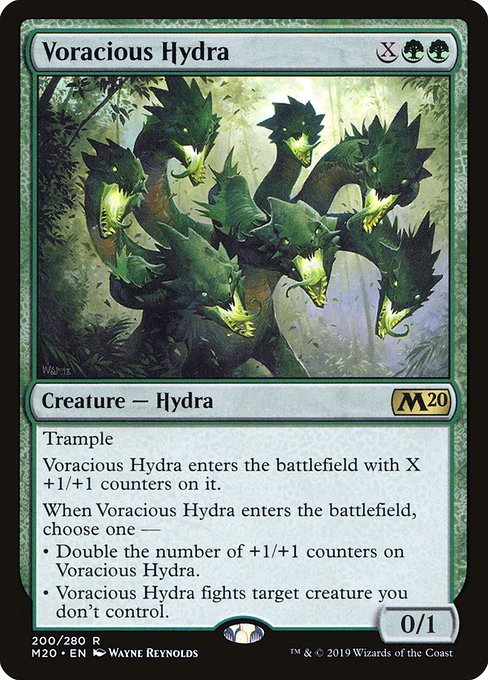 A Field of the Dead ban will really shake up the metagame and the market, so at this point really anything is fair game. Green-based multicolor ramp decks were the top in Standard even without Field of Ruin, and they are still now after rotation with Field of the Dead. I imagine they’ll still be on top afterward, just in some other form. That makes green look like a good bet overall. One prime target is Voracious Hydra, which stands out to me as a card already seeing play in some of these decks, a versatile tool that fits all flavors of green decks.