In my last article, I discussed some lessons I’d learned in 2019. However, I didn’t go over individual trends related to MTG Finance in that piece. Over the year I have developed and updated a google sheet I use to track all my MTG related expenses. I include:

This sheet includes a breakdown of my expenses as well as a category of sales, though admittedly sometimes I have to guess which format the card(s) is being purchased for. In today’s article, I’ll be mining the data from this spreadsheet. While I actually like MS Excel more because I know some Visual Basic coding, Google Sheets is free and I can access it from multiple devices, including my phone.

I only bring this up because the spreadsheets themselves are somewhat involved and my graphs build themselves as you add data points. It is important to note that these trends are from a single store’s data, so they are likely more micro-level trends. I still believe we may be able to deduce some possible macro-level trends from the data. But before we do, I think it might be wise to define our business quarters. 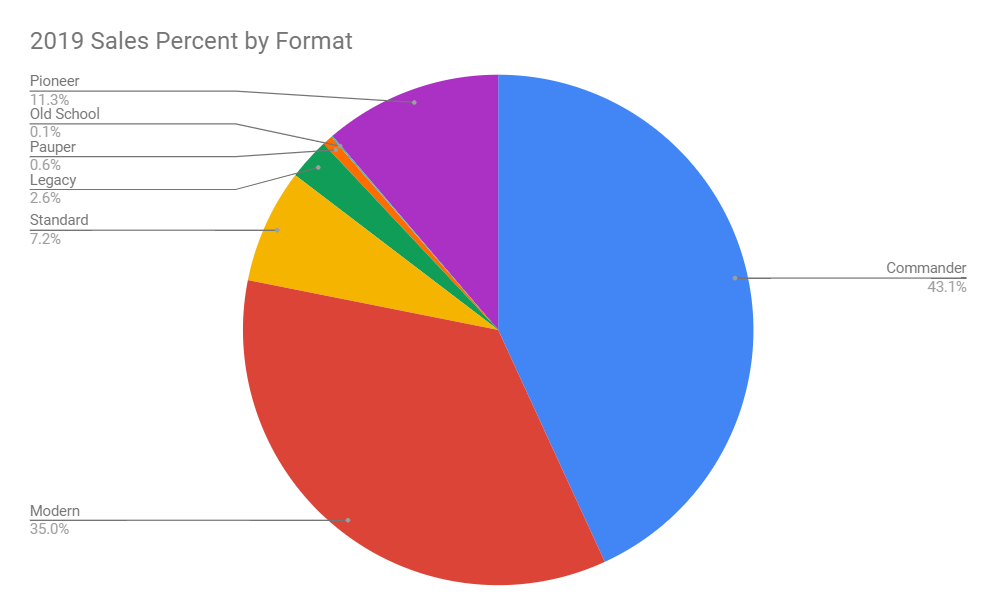 As you can see by the graph above, a significant portion of my sales came from Commander and Modern over the year. This isn’t that unexpected, as I tend to avoid Standard cards due to their extra volatility and the fact that the sales window is much smaller than eternal cards. Thus, this data is heavily influenced by the stock I prefer to carry. One important takeaway though is the fact that Pioneer accounted for slightly over 11% of my total sales on the year despite the fact that the format didn’t exist until late October.

I expect Pioneer to make up a very significant amount of the percentage of my overall sales next year, though it is important to note that when a new format exists demand is usually the highest and supply the lowest so it may cool off a bit in 2020. It’s important to remember that WoTC actually started pushing the Pauper format this year, but sales for it were extremely minor with most of my sales for the format within about a 2-week time span after said announcement. I also keep a record of the number of sales per category: 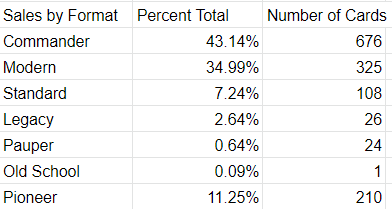 Looking over this data I would have been inclined to invest more heavily in Modern staples for store inventory than any other format, however, as previously mentioned the format staples have stagnated currently with the introduction of the Pioneer format so I’m fearful that any investment in those cards will likely pay smaller dividends now. 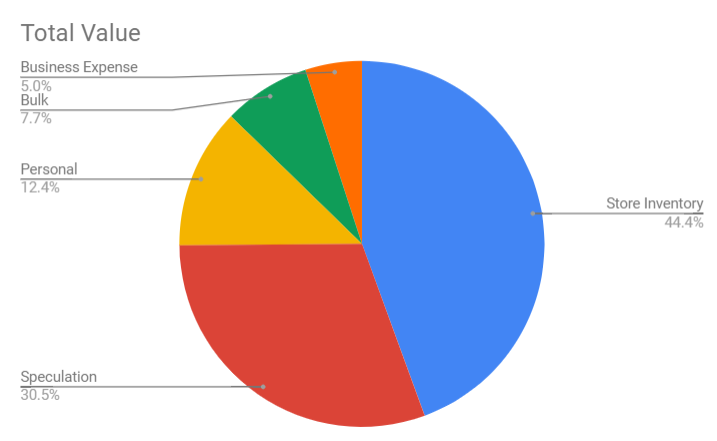 The next graph I want to look at is overall yearly expenses by category. This is definitely micro-level data, but I think it’s critical for any business to look at its expenses from an overhead view and review them. For example, almost 1/3 of my expenses last year were from speculation targets. When I look closer at those expenses, I see a lot of them were done in Q1 and a lot of them were UMA specs. I made those purchases assuming a steady growth of the modern playerbase brought about by a sudden drop in many staples prices.

Sadly, instead of demand growth, we had stagnation followed by what currently looks like a retraction thanks to the Pioneer format cannibalizing the same expendable income. We have typically seen Masters sets tank prices short-term, with a subsequent rebound about 3-12 months out; I think my logic at the time was sound and I don’t think anyone predicted a brand new format this year. The point here is that I have a lot of capital sunk in speculation targets that have done nothing or even lost money over the last 9 to 12 months.

In 2020 I will be more cognizant of my speculation expenditures and likely be a bit less optimistic on many cards. I am also in the process of reducing my personal expenses when it comes to MTG.

I love the game, but I don’t play it nearly as much as I used to. Throughout most of the year, I still purchased a lot of cards with the intent of playing with them only to put them into my personal binders and never take them out. I will likely be shifting some of these cards into my store inventory in the near future as I don’t see the value in sitting on them as many aren’t particularly attractive speculation targets either.

When looking at my business expenses, I found I likely saved a lot of money by buying in bulk. I purchased a large lot of played top loaders off of eBay and I purchase my stamps in large numbers as well. I unexpectedly had to purchase a lot of Card Savers from Amazon recently thanks in large part to a lot of playset sales of Pioneer staples that don’t easily fit into top loaders.

Unfortunately, I wasn’t able to find any used Card Saver lots on eBay before I was forced to buy new ones, solely to make sure I could support playset sales. One major lesson I learned from this year is to set a safety stock number on your shipping supplies and to track usage of them. This will prevent any impulse purchases at less than ideal prices. This is especially true when it comes to your padded envelopes, which when purchased in bulk can be as cheap as $0.05 each, whereas, if you are forced to buy them from a local store you’re likely to be paying more like $0.5-$1.0 each. 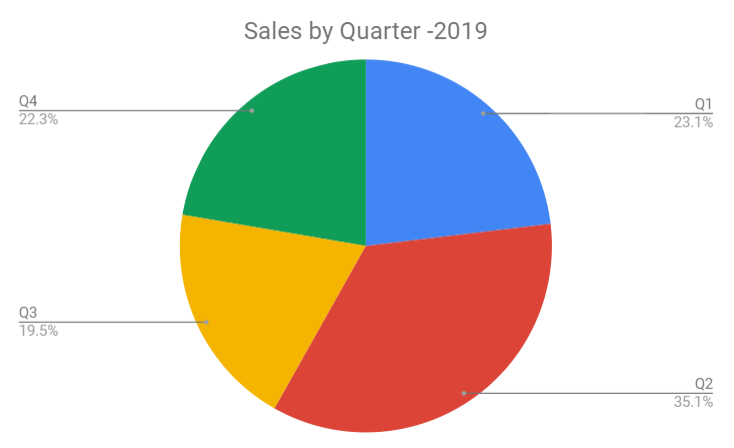 This graph is a simple pie chart of overall sales through each quarter. My best quarter in 2019 was clearly Q2, though it’s important to note that I had a single major sale during that quarter that was near $1,000; if you remove that, it puts the best quarter at Q1. That’s good news as we will soon be moving into Q1 of 2020. Normally, we expect Q4 to have the least in sales as many people’s expendable income is tied up purchasing gifts for family members, due to the significant number of holidays that take place end of Q4. Pioneer’s introduction in Q4 helped strengthen my sales and was actually a very good quarter for me. 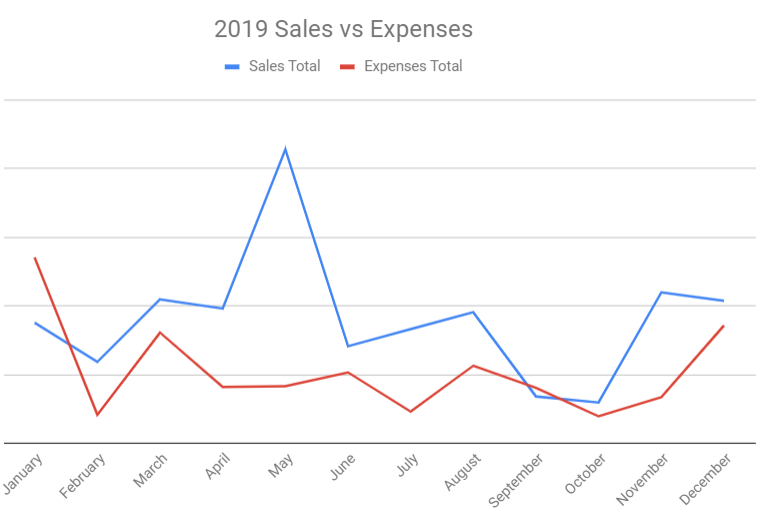 The last graph I want to go over today is my Sales vs Expenditures for each month. The first thing you’ll notice is that I’ve trimmed off the actual sales dollar amounts. While I have no issue sharing generic information, I feel it’s important for all businesses to keep important financial information confidential, including my own. However, we can still mine the information presented.

The most important thing of note is that my sales exceeded my expenses in 10 out of the 12 months, with January and September being the exceptions. This means that I had a good cash flow going throughout most of the year. When purchasing opportunities arose, I was able to take advantage of them because I had a positive cash flow. In fact, my overall expenses for the year made up only 57.8% of my sales volume, which means that I can easily reinvest going into January 2020.

Facebook
« Facing Reality: A 2019 Look Back
Pioneer and Other Trends Heading Into 2020 »