The company where I work has a sweet rewards and recognition system. If you go above and beyond your day-to-day work and go that extra mile, and if someone takes notice and remembers to thank you, you may receive a small gift card. It’s immaterial compared to your salary, of course, but the little extra goes along way in cheering up and feeling appreciated.

When I receive these rewards, my default gift card choice is Amazon—they have dozens of other options but honestly, what do they have that Amazon doesn’t already offer? Besides, most of the time I’m looking for new books, video games, and of course, Magic cards. Amazon carries all three!

When I received one of these rewards recently, I shopped around on Amazon and decided to try my luck at a draft set (three boosters) of Modern Horizons for $20. This set was released nearly one year ago, yet these boosters are still selling for under MSRP?

This inspired me to dig deeper into this set. Are boosters worth cracking? What are the best cards to open? What cards have upside potential? Let’s dive in!

I knew I was gambling a little bit when I chose to spend my gift card on Modern Horizons boosters. While there is plenty in the set worth opening, there’s also a fair share of garbage rares that could render a booster pack worth less than a quarter, like any given booster pack.

Using Trader Tools’ set browsing feature, I was able to quickly locate the cards that would net you immediate profit via buylist if you pay around $6.50 per booster. 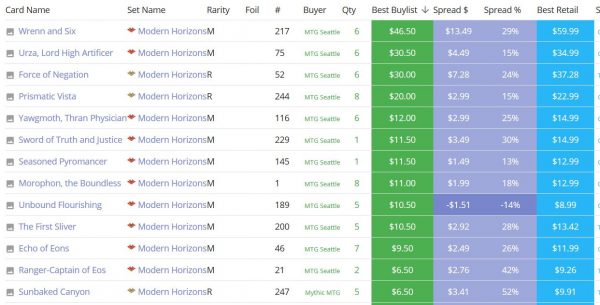 I don’t love those odds. They’re better than scratch-off tickets from your local gas station, but at $6.50 a pop I can’t say I’m inspired.

It gets worse. There are around 32 rares from Modern Horizons—more than half—that buylist for less than $0.50! If you buy a booster pack of this set, your odds of opening cards worth less than a dollar are greater than 50%. At that rate, you’d be better off cracking two Ikoria boosters, in my opinion.

There are certainly some gems worth opening from this set, especially in foil. And if you’re after key Modern Horizons cards, I highly recommend buying those singles directly. Some of these have solid upside, too.

For example, until they’re reprinted Prismatic Vista and Force of Negation are going to remain expensive.

These two rares see play in multiple formats. The former offers terrific mana fetching flexibility and the latter act as Force of Will five through eight in Legacy and Vintage, not to mention mana-less counterspell protection in Modern.

Perhaps the Mythic Rares offer the greatest upside potential here. Wrenn and Six and Urza, Lord High Artificer remain top of the heap for good reason: they see play in multiple formats. On the casual side, players love their swords and slivers, so Sword of Truth and Justice and The First Sliver surely offer upside potential. 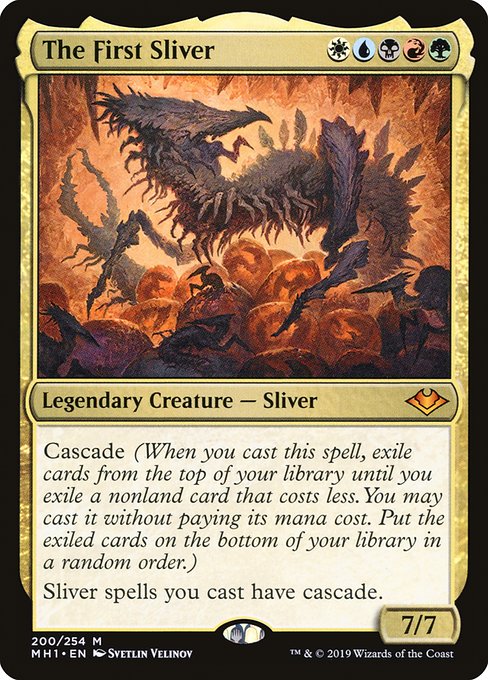 Then, of course, there’s Morophon, the Boundless, which I thought had more upside potential since day one.

Foils are even rarer and offer greater upside as this set continues to age.

But I must reiterate that these singles should be purchased individually. To attempt to crack these in packs is a fool’s errand. They say “a fool and his gold are soon parted” and Modern Horizons is the epitome of that moral. Learn from my experience, and take a look at the rares I opened in my draft set and their top buy prices:

(Aside: I am surprised Tectonic Reformation isn’t worth anything. Cycling made a huge comeback recently. Also, I have a budget mono-Red Commander deck where this could shine to help me avoid drawing excess mountains).

Pretty pitiful, right? In total my $20 worth of booster packs netted me $3 in trade credit. Ouch. And the scary part is, I could have done worse. Force of Rage, Future Sight, Nether Spirit, Marit Lage's Slumber, and Reap the Past all have top buy prices of a lonely nickel. If you needed any more convincing not to gamble on Modern Horizons packs, this data should just about do it.

Interestingly, this isn’t the first time I’ve written about Modern Horizons. I also discussed the set and its opportunities back in November. Let’s take a quick look at my recommendations to see if any have gained traction since that article’s publishing.

Altar of Dementia and Eladamri's Call were the first two cards I mentioned, both as popular reprints. I mentioned that the former was under a buck and the latter was under $2. Nowadays both these cards buylist for $2.50, so these would have been profitable (though nothing to write home about unless you purchased large quantities). 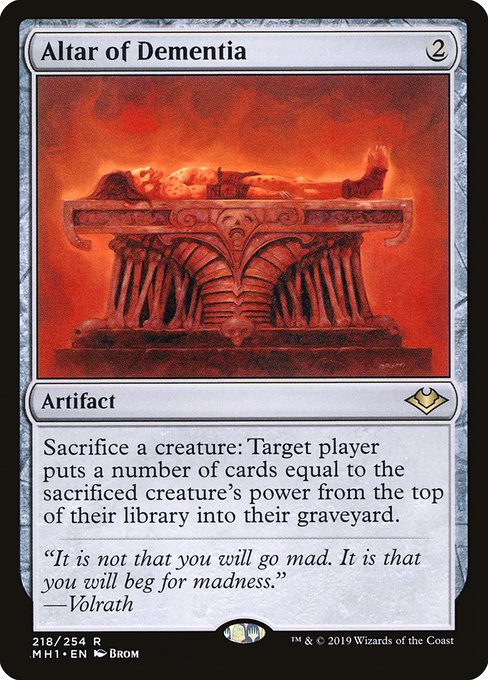 I also mentioned Genesis as a bulk play, though those haven’t paid off just yet (I’m still waiting!). I also mentioned Wrenn and Six, Force of Negation, and Urza, Lord High Artificer, but expressed caution from buying back then. All three of these follow roughly the same pattern: they dipped from November through the winter but have recently rebounded. The bottom on all of these are in…until they’re reprinted of course.

Lastly, I talked about Prismatic Vista and the Horizon Canopy cycle of lands. About these, I said:

“You have Prismatic Vista at $30 and the five Horizon Canopy lands. These will all experience dsustainable demand in time, but are suffering from soft demand in the short term. Eventually these will be a buy—you just need to pick the price you’re comfortable paying and be content to wait a while.” 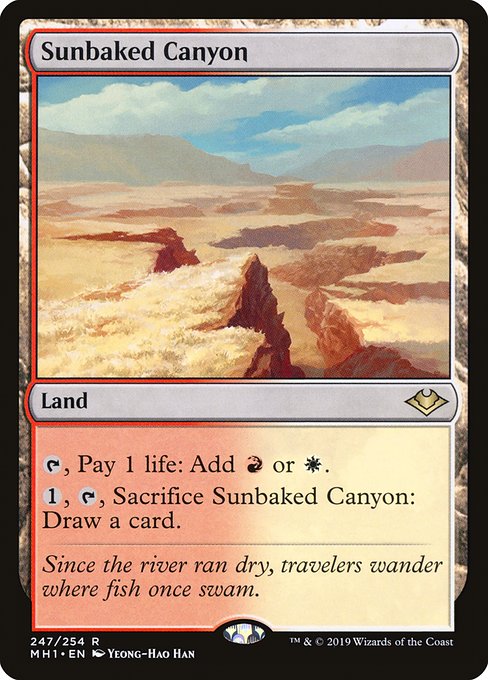 These all appear to have bottomed, and I’d say now is a good time to pick up copies you need for play. They should all offer an attractive risk-reward profile now.

When I wrote about Modern Horizons back in November, prices were dropping rapidly and packs were selling below MSRP. Fast forward seven months and that trend may have finally stabilized. Packs still sell for below MSRP, but by a smaller margin. And prices may have finally found their bottom. This means that from here on, there could be some upside on the most played copies of cards from this set. I’m keeping my eye on a few.

Force of Negation, Prismatic Vista, and Urza, Lord High Artificer have really established themselves as tournament playable and offer plenty of upside. Foils will be especially pricey. Some casual favorites including The First Sliver and Sword of Truth and Justice could move up slowly over time. And let’s not forget Morophon, the Boundless and Serra the Benevolent, two personal favorites of mine.

But I must advise that you purchase the singles you want directly. Do not play the Modern Horizons lottery—there are too many awful cards you could open, rendering your purchase nearly worthless. I’ve got the odds of making your money back at around 13%, which does not make for an attractive bet. You’d be better off betting on the New York Jets to win the Superbowl.