Two big Magic: The Gathering news items hit the internet this morning, 9/28/2020, one being an expected Banned and Restricted announcement, and the other containing some unexpected news about the upcoming The Walking Dead Secret Lair.

Uro, Titan of Nature’s Wrath is Banned in Standard

As many players seemed to be expecting, Wizards announced in their Banned and Restricted Announcement today that Uro, Titan of Nature's Wrath will now be banned in Standard.

Ian Duke provided a breakdown of their decision-making process, stating:

In order to weaken these post-rotation ramp strategies, we’re choosing to ban Uro, Titan of Nature's Wrath in Standard. Our goal is to bring these decks down to a level where they are still appealing and competitive, but where natural metagame forces are enough to keep them in check. In general, we prefer this approach to overshooting the mark and removing an archetype from viability. However, we've certainly noted this weekend's strong results for the Four-Color Omnath deck and will continue to watch how that strategy and the overall metagame adjust in the coming weeks.

It's interesting to see a ban almost immediately after a new set releases. Only time will tell if just getting rid of Uro is enough to bring balance back to the Standard metagame!

The first official details of the new Secret Lair x The Walking Dead were released today as well. This new Secret Lair will be available for preorder from October 4-12, and in typical Secret Lair fashion, the cards will be printed and shipped after the preorder period ends.

Here is perhaps the most interesting bit of information from the official Wizards post:

The cards included in this very special Secret Lair drop will be completely new to Magic, depicting the iconic characters of the long-running and critically acclaimed TV series. These are mechanically unique cards that will be legal in Eternal formats. Commander players especially should look forward to bringing their favorite characters from to life on the tabletop!

This is the first time a limited run product like this will include completely new cards that are also legal in eternal formats, which sets an interesting precedent for the game. Only two of the cards have been spoiled so far at the writing of this article, one from The Hollywood Reporter and the other from Entertainment Weekly. You can see them below, and we will add the others and their sources as they are revealed. 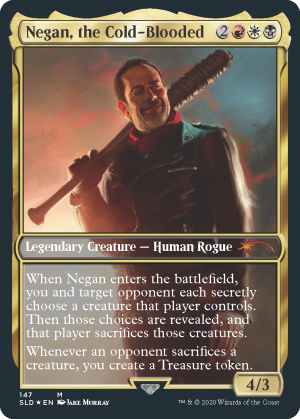